Globally, more men than women have full-time employment – a gap that remained just as wide in 2013 as it was about five years ago.

According to Gallup’s Payroll to Population (P2P) report, 34% of adult men globally have full-time work, compared to only 18% of adult women.

The deficit of women in good jobs is the largest in South Asia, and the Middle East and North Africa (MENA), where women’s employment rates lag behind men’s by 20%.

Roughly three in four women in each region are out of the workforce, many choosing not to participate for cultural or political reasons, the report cited.

The study interviewed 136,000 adults (aged over 15 years) across 136 countries and defined working for an employer for at least 30 hours a week as “full-time” employment.

The study found only two countries in the world where the percentage of women employed full-time exceeds 50% – Sweden and Iceland – while the rate for men is 50% or higher in 11 countries.

Sweden is also the only country to have achieved gender parity in full-time employment – 54% of adult women compared to 53% of adult men are employed full-time. 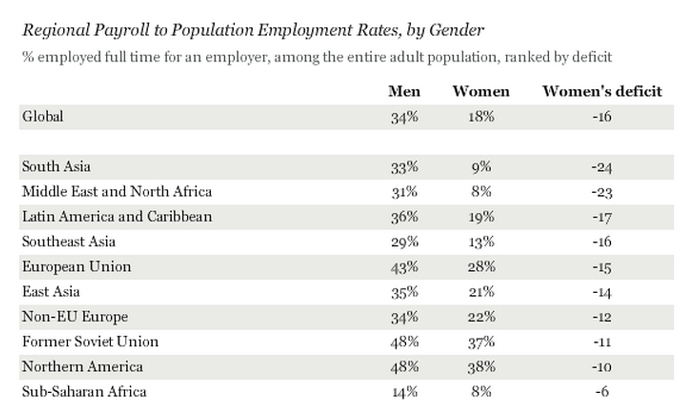 Interestingly, women’s deficit in good jobs is the smallest (6%) in sub-Saharan Africa, but P2P rates are also among the lowest in the world for both women and men in this region, where only 14% of adult men and 8% of adult women are employed.

53% of Malaysians worried about retirement

The training programmes will utilise the RM900 million HRD levy that will be collected from HRDF's registered employers...

What will keep HR leaders awake at night in 2018

This year, it seems that employee engagement has clinched the top spot, cited by 41% of HR as their biggest worry...

In connection with the same incident, a supervisor was also charged under the Workplace Safety and Health Act. ..

30% of staff want managers to improve on communication

Randstad has also confirmed that its offer of $3.40 per share in cash is full and final, and will not be increased...