75% of Hong Kongers are frustrated with their candidate experience

Following studies which claimed a majority of professionals in Malaysia were dissatisfied with hiring processes in the country, a new report shows their counterparts in Hong Kong aren’t too happy either.

According to the MRIC Group’s “2015 MRIC Talent Report”, 79% of Hong Kongers face various sources of frustration while applying for jobs. The percentage was slightly lower than the regional average of 80%.

Polling respondents from Greater China and Singapore, the report found frustration levels were highest in Taiwan, with 87% of candidates experiencing problems during applying for jobs. This was followed by candidates in Singapore (85%) and China (79%).

The main sources of discontent in Hong Kong included the lack of information and long waiting times. These were encountered by candidates whether the candidate applied via a job agency or to the company itself.

“It is MRIC experience that a recruitment process should not last more than 8 weeks for junior professionals and 12 weeks for senior ones otherwise the candidate may be lost,” commented MRIC CEO Christine Raynaud.

“Large firms necessarily involve multiple stakeholders yet they should aim to keep the process as condensed as possible.”

The report stressed on the need for companies to make the hiring process better for candidates, especially since only 39% of respondents in Hong Kong stated they were  “very likely” or “somewhat likely” to apply to the company again. This was followed by 38% in Singapore, 37% in China and 32% in Taiwan.

Interestingly, across all countries, candidates’ level of satisfaction drops in the final stage of recruitment as compared to the initial stages. 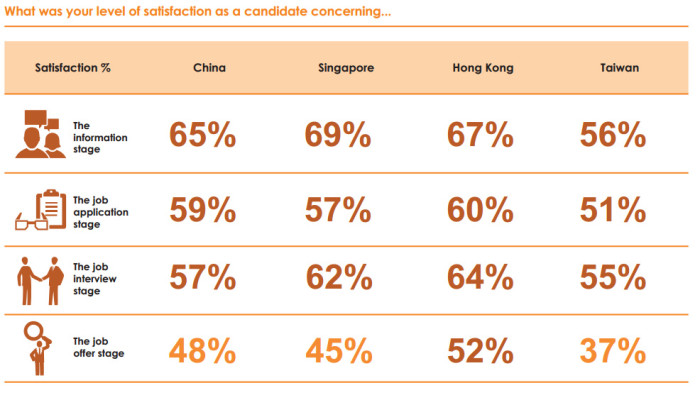 “Companies and external recruiters alike could better leverage online technology to improve the overall candidate experience; beyond the posting of job openings, they could better manage their process, build employer brand and personalise their relationships” said MRIC managing director for China, Angie Eagan.

However, when looking for company information, the  majority of candidates in Hong Kong were likely to turn to the corporate websites.

HR needs to step outside of its comfort zone

Singapore gets another public holiday for 2015

The most annoying behaviours in the workplace

Annoying office behaviours will affect office morale and cause colleagues to lose their marbles...

Is a window the secret to productivity?

Workers in windowless offices lose 46 minutes of sleep a night. Natural light be the answer to more well-rested staff. ..

Beyond the magical $75k, further increases in income no longer improve employees’ ability to do what matters most to them...

The strangest things staff do at work

From playing games in bathrooms, to looking for mail order brides, staff will do anything to avoid doing work...