According to the Expat Insider 2019 by InterNations, The two Tiger Cubs join Asian Tigers Taiwan (1st) and Singapore (6th) which have always ranked at least in the top 15.

The four countries fared well for personal finance as well as ease of settling in.

When it comes to settling in, results ranged from Malaysia’s 3rd place to Vietnam’s 15th.

However, when looking at quality of life, Malaysia (24th) and Vietnam (42nd) cannot compete with Taiwan (3rd) and Singapore (4th). 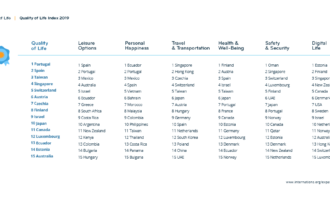 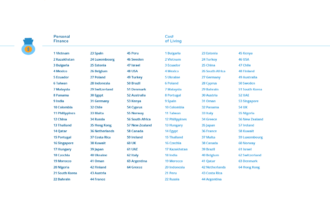 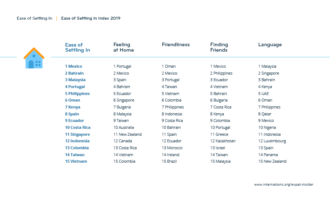 Ease of settling in ranking

Overall, the top 10 countries for expats were:

Bahrain, last year’s number one, still featured in the top 10 but dropped to seventh place. Expats are noticeably less satisfied with their working life with the country dropping from 1st to 64th from 2018 to 2019.

At the other end of the list, seven of the ten worst-rated countries already had this dubious honor in 2018. Nigeria – which didn’t appear in the 2018 ranking – has always placed in the bottom 10 when featuring in the survey. Russia (56th) and South Korea (55th) are new to the bottom 10. While the former has performed quite badly before, the latter is one of the biggest losers in 2019.

The 10 worst countries for expats were:

To view in full resolution, open in new tab. 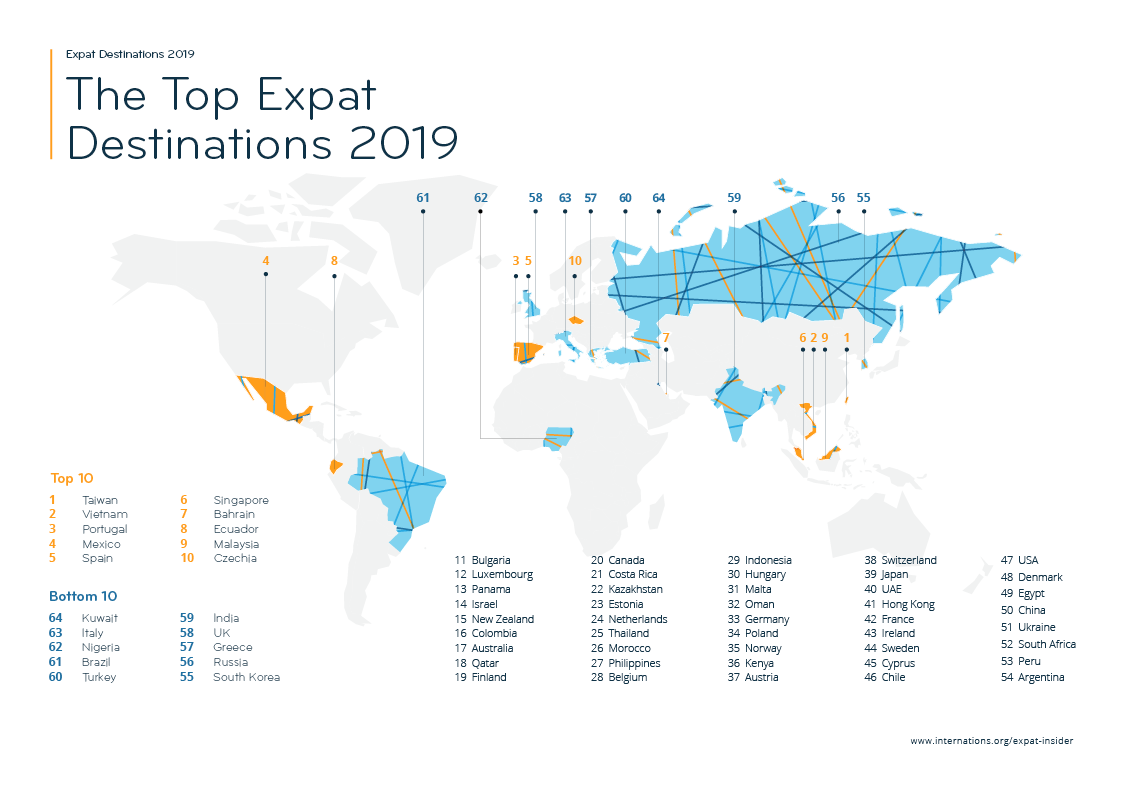 Additionally, the survey revealed that the top concerns expats had prior to the move were language barrier (37%), distance from home country/ family (36%), and high cost of living (32%).

To compile the rankings, InterNations asked 20,259 individuals around the globe to rate up to 48 different factors concerning various aspects of life abroad on a scale of one to seven. The rating process emphasised the respondents’ personal satisfaction with these factors and considered both emotional topics (e.g. friendliness of the local population) as well as more factual aspects (e.g. affordability of healthcare) with equal weight. The ratings of the individual factors were bundled in a total of 17 subcategories, and their mean values were used to draw up five topical indices.

The five indices, as well as the responses to the question “How satisfied are you with life abroad in general?”, were then averaged to arrive at the overall country ranking. The additional Cost of Living Index, while providing some insight into expats’ perception of living expenses in their current home, does not factor into the overall ranking.

For a country to be listed in any of the indices and in the overall ranking, a sample size of at least 75 survey participants per destination is required. The only exception to this rule is the Family Life Index, where a sample size of at least 40 respondents raising children abroad is necessary. In 2019, 64 and 36 destinations, respectively, met these requirements. However, in many countries the sample size exceeded 75 or even 100 participants by far.

Snapshot: The top measure of success for HR analytics, as told by ASM's Daniel Kusmanto

Singaporeans believe they are underpaid

Changing jobs to achieve better compensation appears to be the way out for a majority of locals. Do your employees feel the same w..

Thomson Reuters carried out a round of layoffs last week within its Singapore operations, as part of a global move to manage costs..

Belt and Road initiative to spur hiring in finance

35% believe it will create more job opportunities for financial professionals in Hong Kong...

Infographic: How to cut the staggering cost of hiring the wrong candidate

You are likely to get three times the number of highly-rated candidates if your job descriptions focus on the needs of the candida..