Why is gender diversity in leadership still a huge issue for Singapore?

One-third of female employees in Singapore (32%) believe their management team would prefer to promote a male candidate over an equally-capable female candidate.

This worrying belief is prevalent across Asia Pacific, where in Robert Walters’ new whitepaper, more than half of women employees (52%), among a pool of 4,400 respondents in total, blamed this preferential trend for fewer women in leadership roles.

Indeed, four in five women across Asia Pacific (80%) attest to women being under-represented in leadership positions, a finding echoed by 75% of Singapore-based respondents. However, just 59% of male respondents across APAC shared this view, perhaps pointing to the heart of the issue.

The whitepaper, titled Empowering Women In The Workplace, identified the top three reasons why women feel they continue to remain under-represented, and the above preferential treatment topped the list.

The second reason? Family pressures or commitments outside of work, said half of women (50%) as well as male (51%) respondents. The third most cited reason held the employer directly responsible – a workplace culture that does not actively foster diversity, inclusion and equality.

So what’s to be done to improve the situation and make gender diversity a non-issue? More than 70% of female respondents across Asia Pacific (71%), including Singapore (79%), asked for mentoring or sponsorship at senior management levels.

More than two in five regionally also called out for personalised training programmes (48%); formal leadership training sponsored by the employer (46%); as well as internal networking opportunities through meeting the senior management more often (44%). 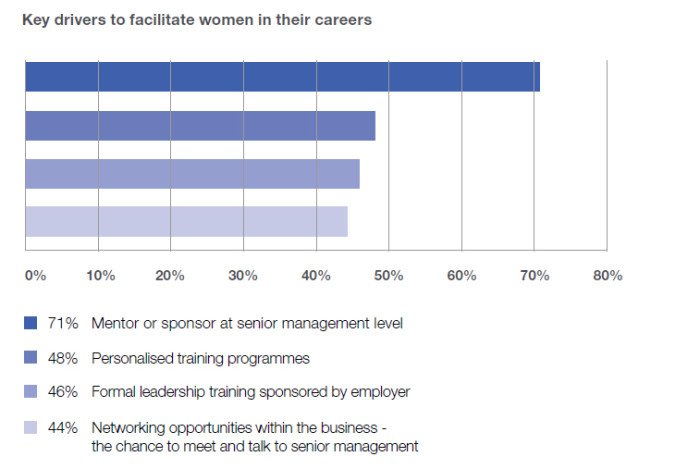 Three reasons your staff are not engaged

The app will suggest users nearby, allow people to swipe left and right and uses facial recognition to eliminate business cards...

PM Lee summed up what the government is doing to continue to prosper: "jobs, jobs and jobs," citing three ways of thinking about j..