Beginning in 2017, public companies in the US will be required to disclose the ratio of CEO pay to median worker pay, to comply with the new rules adopted by Securities and Exchange Commission (SEC).

As a preview of how the policy is going to work, Glassdoor has collected thousands of voluntary and anonymous salary reports from employees at S&P 500 companies since 2008 and created a list of companies with the worst CEO to median worker pay ratio.

ALSO READ: CEO salaries to be listed as a ratio of workers’ pay, but will it help?

The numbers showed that the  company with the highest ratio of CEO pay to median worker pay is Discovery Communications with a ratio of 1: 1,951. CEO David M. Zaslav earned US$156 million in 2014 while median worker pay was US$80,000.

The second highest in the list was fast-food chain Chipotle: CEO Steve Ells earned US$28.9 million while the company’s median worker pay was US$19,000, making it a pay ratio of 1: 1,522.

The second lowest CEO pay ratios which are also close to 0 are Google CEO Larry Page and Kinder Morgan who accepted US$1 gesture salary. 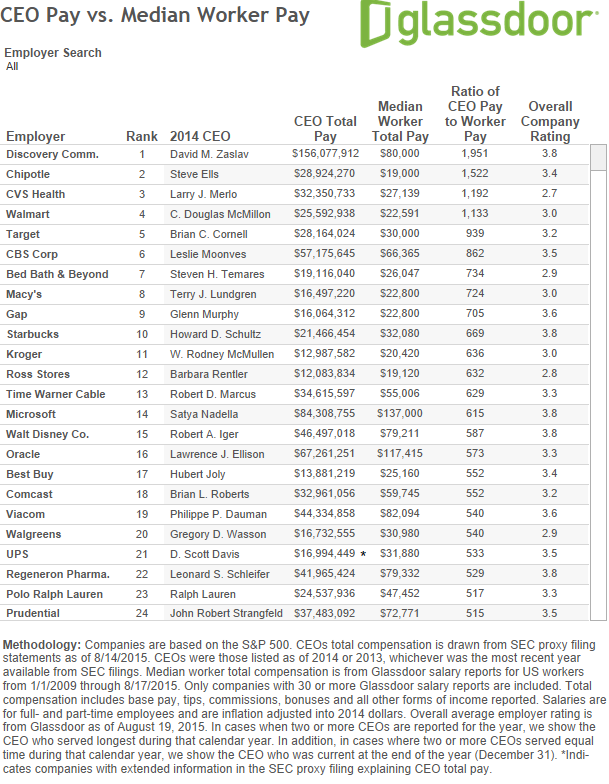 Should the minimum wage be age sensitive?

The worst ways HR teams have dropped the ball

Watch out, HR folks! The carelessness of a team member can result in serious consequences for the organisation. ..

According to national police chief Mohamad Fuzi Harun, the three units likely to be scrapped are the STAGG, STAFOC and STING. ..

Ong Chin Yin, Head of People at Grab, on the importance of HR tech and what to take note of when implementing a new system...

IBM has reportedly stated it would institute involuntary job cuts in the Netherlands, adopting a new workforce reduction strategy...