The most expensive APAC markets to hire an expat middle manager 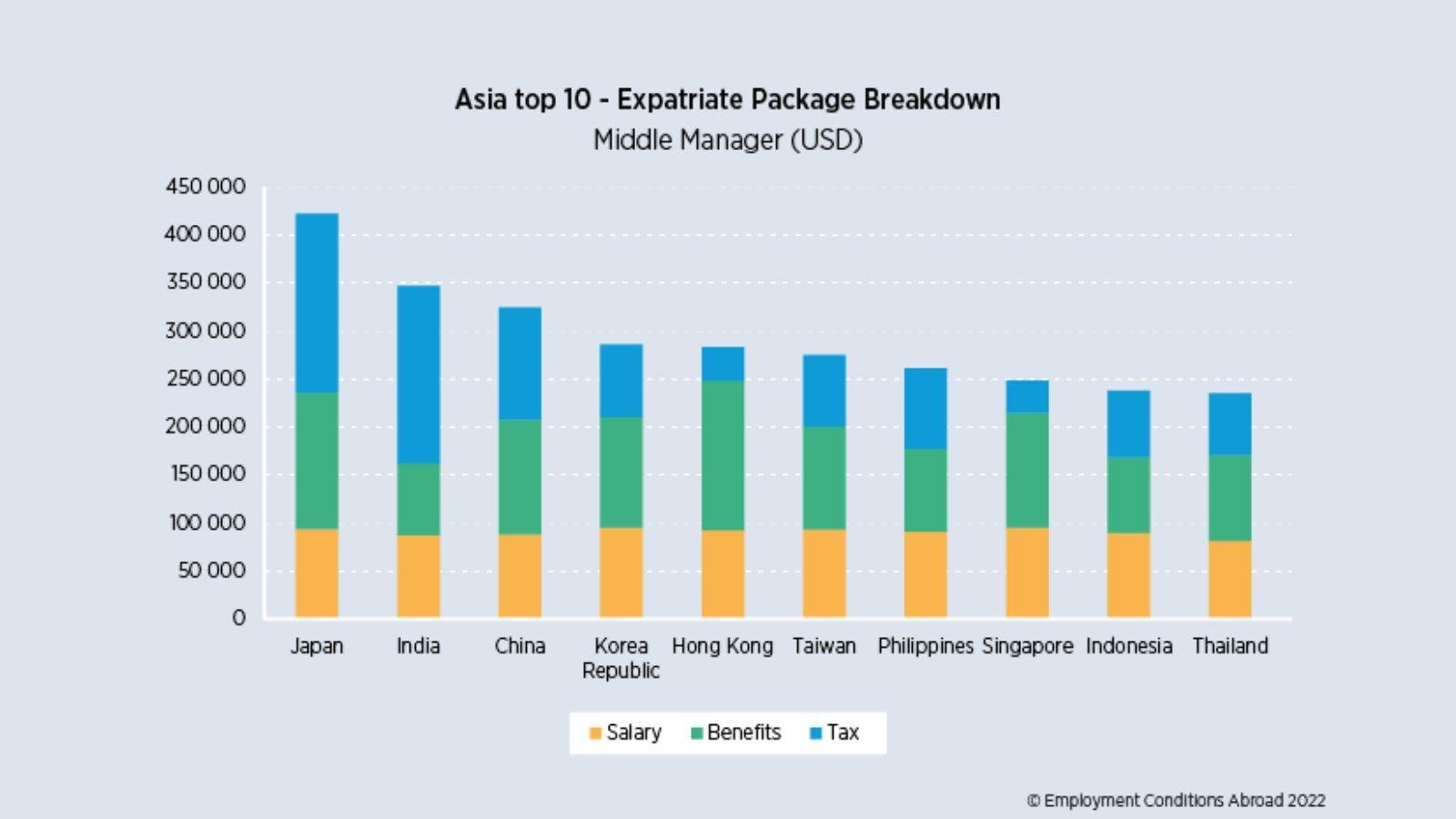 They are Japan, India, and Mainland China. Meanwhile, markets like Singapore, Malaysia, and Hong Kong are relatively cheaper.

The cost of hiring an expatriate middle manager in Singapore is relatively cheaper than in other markets like Japan, India, and Mainland China, according to mobility solutions company ECA International's latest MyExpatriate Market Pay Survey.

This is despite the cost of an expatriate package - comprising salary, benefits, and tax - in Singapore (in SGD) witnessing a 4% rise in 2021. Report analysts dubbed this as a "modest" growth, considering the local market is the 13th most expensive city in the world for overseas workers. That said, Lee Quane, Regional Director, Asia, ECA International explained once package value is converted into USD, the cost rose by a total of 10% - which is considered "significant" compared to the year before.

"Salaries recovered after falling by an average of USD 1,000 per annum in 2020, while benefits costs, such as those around accommodation expenses, also rose as many employers provided financial assistance to their expatriate staff in meeting rising accommodation costs as the rental market bounced back in 2021," Lee added.

"Overall, the cost of employing an expatriate in Singapore rose by approximately 10% to just under USD 250,000 per annum, with cash salaries seeing increases of about 9.5% in USD terms."

For clarity, the salary portion of the package is calcuated according to home- and host-based salary systems, as well as locally-hired and localised expatriates and expatriates on indefinite contracts. Benefits, in this case, refers to the actual costs or allowances paid to cover the benefits offered. For the taxes portion, it takes into account employee taxes, and not company contributions.

Looking at Singapore's Oceania neighours, report analysts discovered the cost of an expat package in Australia and New Zealand both saw "significant rises". Such showing owed to "a variety of reasons" like the strengthening of the respective market's currencies, the increase of benefits costs, and the changing of income tax in the past 12 months.

Closer to home, Malaysia "remains the market in the region" with "the lowest" expat package cost, even though analysts found that cash salaries rose by 11% in 2021.

“Expatriates in Malaysia saw their cash compensation rise at a rate which was higher than the regional average," analysts revealed. "Despite this, Malaysia remains the location in the region with the lowest salary and benefits packages for expatriate staff."

"Salary and benefits packages for expat staff in Hong Kong recovered slightly in 2021 following a fall at the start of the COVID-19 pandemic," explained in the report. "Cash compensation packages rose by 4.5% in USD terms, but this was lower than rates of growth seen in other regional economies such as Japan and Singapore. Furthermore, the costs of benefits continued to decrease, as they did in 2020, contributing to a fall for Hong Kong in the rankings."

Lee shared: "While all locations in the region saw an increase in the pay packages for expatriate staff, many still fell in our rankings as their rates of growth were lower than those experienced elsewhere in the world. Japan, for example, saw the value of expatriate packages increase by 4% in 2021. Nevertheless, it is no longer the location with the highest expatriate packages worldwide, having been overtaken by the UK, where the overall value of an expatriate package rose by over 9% in USD terms."

Further up the globe, Mainland China "remains" the market with the "third-highest" expat package cost behind Japan and India. It is noteworthy that the bulk of the package cost in Japan and India is attributed to tax, instead of salary and benefits.

"While [China's] position in the rankings remains unchanged, cash salaries paid to expatriate staff increased by over 11% in 2021 in USD terms compared to the year before," explained in the report. "This was partly influenced by the relative strength of the Chinese Yuan, but may also be attributed to companies having to offer higher salaries in order to attract and retain expatriate staff, as Mainland China continued to impose its zero-COVID policy throughout the year."

The survey looks at pay levels for over 10,000 international assignees from more than 300 companies across 130 countries and more. The data also includes information on benefits, allowances, salary calculation methods, and tax treatment. Figures used in this release were collected in the later stages of 2021, and refer to a Middle Manager position.

Infographic: How to reduce stigma and manage HIV in the workplace

In numbers: EP and S Pass holders in Singapore, by occupation classification [2010-2020]