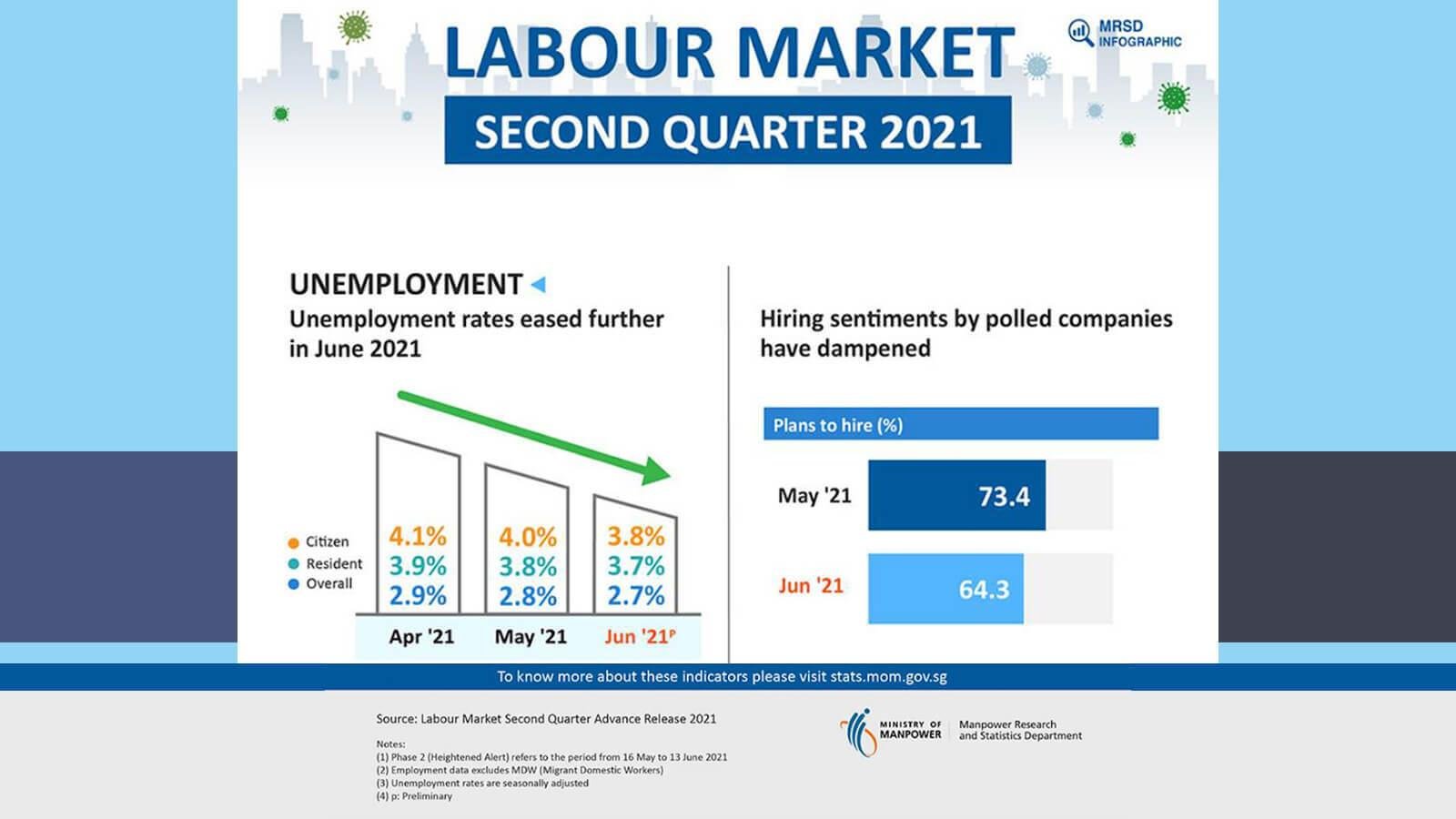 Further, among the companies polled by the MRSD in June, about one in three indicated an intention to raise wages within the upcoming three months (32%).

In brief, Phase Two (HA) measures which took place from 16 May - 13 June resulted in slower resident employment growth overall, and a decline in sectors directly impacted by the measures.

This impact, however, was not observed for unemployment which eased further in June 2021; and retrenchments. According to the report, while retrenchments increased slightly, majority of the retrenchments were due to business re-organisation/restructuring, or downturn in certain industries.

More details on total employment figures, the unemployment rate, and more, can be found below. 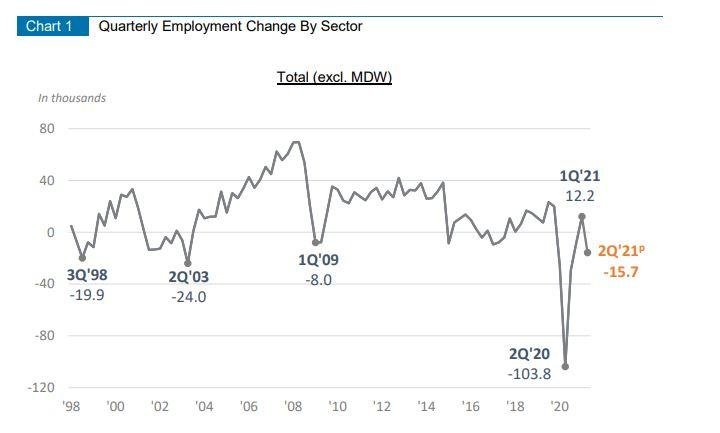 Total employment saw a decline in Q2 (-15,700), after registering its first increase in the previous quarter, following a year of declines in 2020.

The report further noted that this slower resident employment growth was attributed to declines in domestic sectors more directly impacted by the tighter safe management measures, such as food & beverages, and services and retail trade.

Unemployment rates continued at a decline of 0.1%-point in June 2021 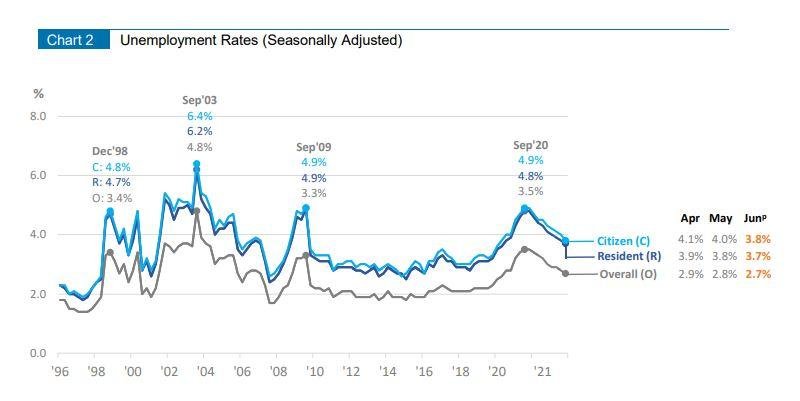 On the other hand, resident employment continued to grow steadily in outward-oriented sectors such as information & communications and professional services, as well as in community, social & personal services.

While this was so, non-resident employment declined more sharply across most sectors, amid continued restrictions on the inflow of migrant workers.

On a more optimistic note, June this year saw a further ease in the Singapore's unemployment situation, with unemployment rates at a continued decline of 0.1%-point for overall (from 2.8% to 2.7%) and residents (from 3.8% to 3.7%).

The citizen unemployment rate fell by 0.2%-point, from 4.0% in May to 3.8% in June. Since peaking in September 2020, unemployment rates had been falling steadily, though they are not back to pre-pandemic levels.

On the resident front, over the quarter, the number of unemployed residents recorded fell from 95,500 in March to 86,600 in June, the report added. 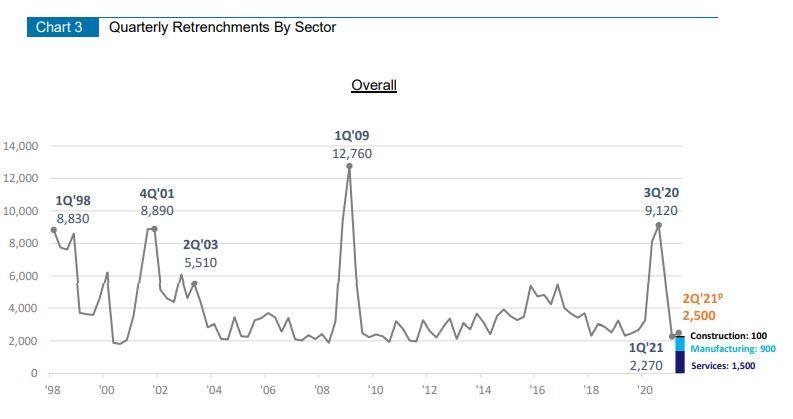 Coming to retrenchments - according to the report, based on latest survey returns to date, retrenchments in the country are expected to remain low in the quarter (2,500), but up slightly from the previous quarter (2,270).

This increase was mainly attributed to "a modest uptick in layoffs" in both the manufacturing and construction sectors; while in sectors such as food & beverages services, which were directly impacted by the tighter restrictions, no notable increases were observed.

Overall, the report shared that the likelihood of retrenchments in Q2 is expected to be similar (1.3 retrenched per 1,000 employees) to that of Q1 (1.2), and comparable to pre-pandemic levels. 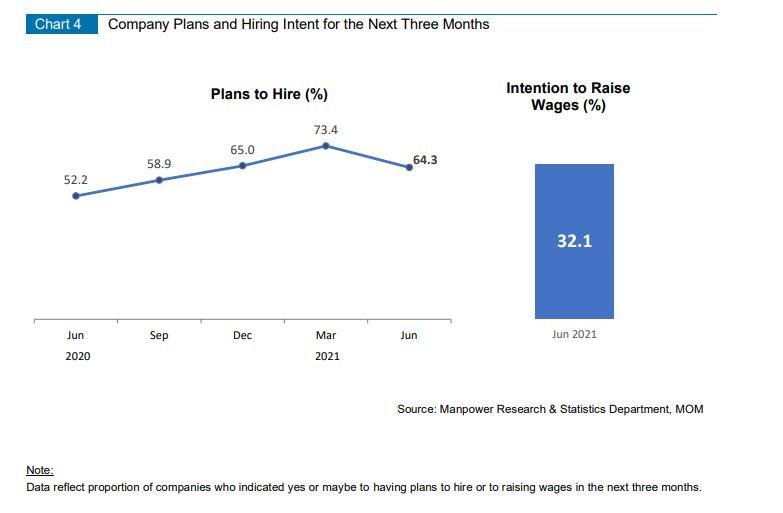 With the above in mind, the report also highlighted another point - that the rise in COVID-19 cases around the world due to the Delta variant, as well the Phase Two (HA) measures, may have dampened the hiring intent of companies.

In particular, although two-thirds of the companies polled in June (64%) indicated they had plans to hire, this was down from the 73% in March.

Further, the Department also started to poll companies on their plans on raising wages in June this year, and among the companies polled, about one in three indicated intention to raise wages within the upcoming three months (32%).

Commenting on the report findings, Dr Tan See Leng, Minister for Manpower, said the Government will continue to support local hiring through measures like the Jobs Growth Incentive. "Initiatives such as career conversion programmes as well as those under the SGUnited Jobs and Skills Package remain available for jobseekers to reskill and upskill so that they can take on new opportunities.

"At the same time, I encourage companies affected by the recent measures to see this downtime as an opportunity to transform their businesses, redesign job roles, and reskill their employees."