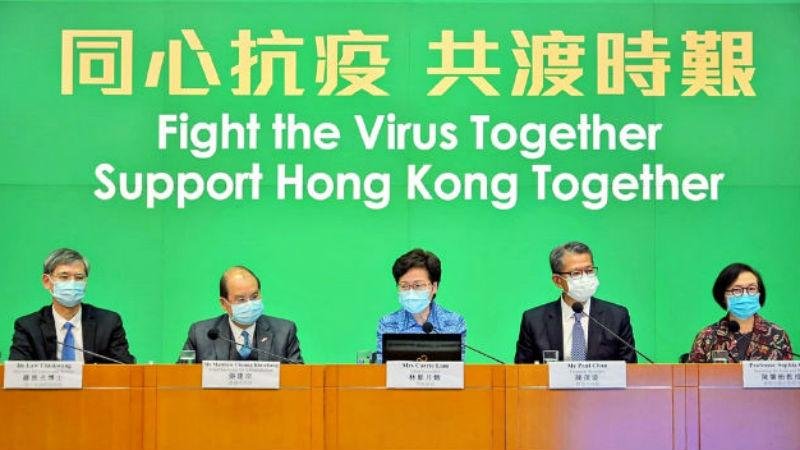 Hours after the government ramped up social-distancing restrictions, chief executive Carrie Lam Cheng Yuet-ngor announced on Wednesday a $HK137.5 billion relief package – in which a HK$80 billion Employment Support Scheme was introduced as the centrepiece – in a bid to cushion the economic blow to Hong Kong employers and workers.

The government will subsidise 50% of workers’ wages for six months, capped at HK$9,000 a month per worker. Employers – who regularly contribute to the mandatory provident fund (MPF) and do not work for the government, statuary bodies or government-subsidised organisations – will be reimbursed in two instalments.

The first round of payments will be made no later than June. Employers under the subsidy scheme will have to promise to halt any layoff plans. About 1.5 million workers will benefit from the scheme.

“I do hope employers who are now watching this press conference, or who will read the newspaper tomorrow, will bear in mind that money is coming, so don’t rush into laying off your staff and hang on as long as possible because money is coming,” Lam said.

Catering, transportation and construction industries, which have lower MPF contributions than other sectors, will be subsidised in other ways. About 800,000 people are expected to benefit.

The government has also pledged to create 30,000 new jobs in the public and private sectors in the next two years. It will also recruit 10,000 civil servants and 5,000 interns before the end of the year.

Acknowledging that the aviation industry has taken a huge blow from COVID-19, which has affected 75,000 workers, Airport Authority Hong Kong will purchase about 500,000 air tickets from four airlines, and airport services equipment, to support the industry which is on the brink of collapsing.

HK$1 million worth of one-off subsidies will also be distributed for each large aircraft, and HK$200,000 for smaller planes.

Other notable measures include a 10% salary cut for Lam and 16 cabinet ministers, and a 20% cut in MTR fares for six months.