At the Dewan Rakyat on Monday (6 August), Economic Affairs Minister Mohamed Azmin Ali revealed that about 500,000 Malaysians are currently jobless, with the highest rate of unemployment in Labuan (8.6%), followed by Sabah (5.5%) and Terengganu (4.5%), Free Malaysia Today reported.

Zahidi had asked Azmin to state the number of unemployed and their qualifications. He also wanted to know the long-term measures to reduce unemployment among youths.

Diploma holders comprised the biggest group of job-seekers followed by SPM holders, Azmin revealed, adding “the highest number of unemployed are from the younger group who are just entering the job market.”

When it comes to measures to reduce unemployment, Azmin says it can be done through re-skilling and up-skilling training.

Separately, according to the recently released Informal Sector Work Force Survey Report 2017, by the Department of Statistics Malaysia (DOSM), in 2017, 1.36 million were employed in the informal sector. This comprises 9.4% share of the total employment in Malaysia and 10.6% of employment in the non-agricultural sector.

By industry, almost two thirds of employment in the informal sector were concentrated in the services industry (62.1%), followed by construction (20.0%), and manufacturing (17.2%).

Within the services industry, 20.5% of informal sector employment came from wholesale and retail trade, and repair of motor vehicles and motorcycles. This was followed by 16% in accommodation and food and beverage service activities, and 8.3% in human health and social work activities. 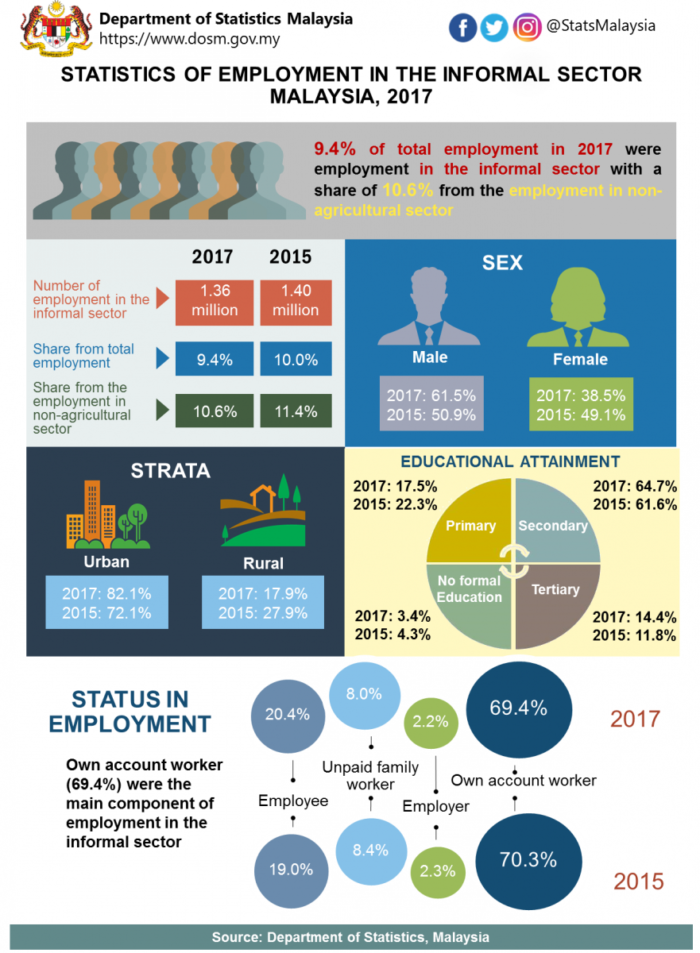 What HR should know about Google's new job search function

"Change and transition are not easy, so I try to manage this by being empathetic with my business partners," says Herring...

As more companies do business with China, L&D candidates with spoken and written Mandarin skills are in demand, within HR...

Malaysians think they are spending too much time at work

As a result, almost half of locals believe their professional lives are limiting them from dating and socialising. How can bosses ..

To cater to Singaporeans' expectations of a basic standard of living in retirement, the CPF and Medisave minimum sums have been in..

Hiring for HR and admin roles in Singapore continues to slump

Demand for HR talent has undergone a continual decline over recent months, with an annual drop of 11%...