Huawei's Dongguan Campus is akin to a modern fairytale [photos] Huawei started out in 1987 in a small apartment in Nanshan District, Shenzhen. As the business expanded, so did its need to house its growing talent.

Situated in Shenzhen known as the Silicon Valley of China, and nestled among peers Alibaba and Tencent, is the behemoth Huawei headquarters.

In 1998, the technology giant started construction on its first campus in Bantian. In 2003, the 400-acre campus became its global headquarters that today is home to 38,000 Huawei employees. Worldwide the company employs almost 200,000 people and is now the world’s largest telecommunication equipment provider with operations in over 170 countries.

By the end of the decade Huawei needed another campus to house its ambitions for the future; this time, however, it had something different in mind. In this issue, we go inside the global technology giant’s European-themed model village – Ox Horn campus in Dongguan, and how this workplace, which might conjure images of quaint nostalgia, is actually at the forefront of Huawei’s talent plans for the future. 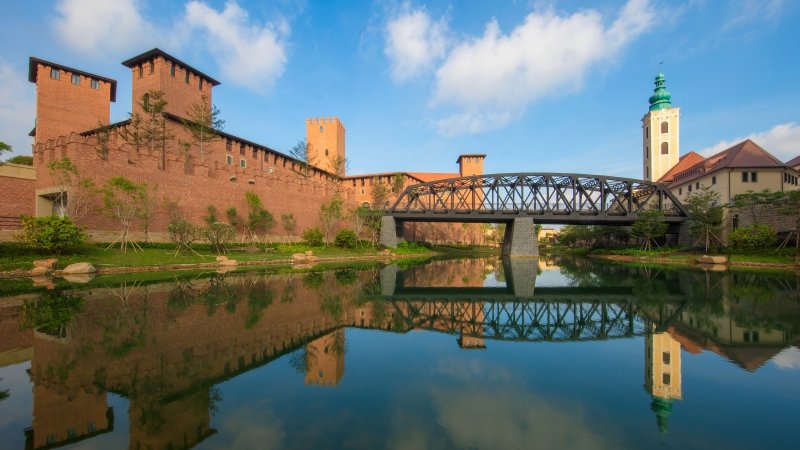 Built on the south shore of Songshan Lake in Dongguan, Huawei’s Ox Horn Campus looks like it’s straight from a Disney fairytale. Opened in June 2018, the 300-acre, or 1.4 million square-metre campus, is divided into four zones each with 12 blocks modelled after a renowned European city.

There are a total of 108 buildings on the campus, which aside from offices, includes a lake with black swans, a gym, a library, coffee shops, housing, a hotel, and plenty of casual meeting spots. The perfect blend of form and function. 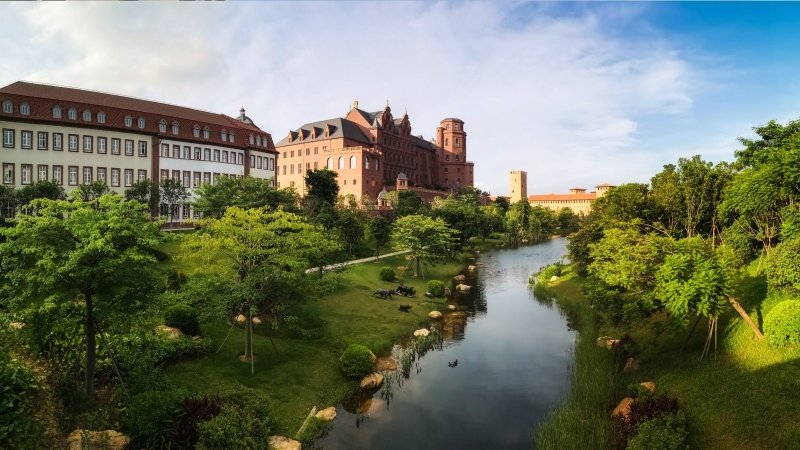 Huawei invested about 10 billion yuan (about $1.45bn) in the construction and infrastructure of the campus. The 12 villages include replicas of the Heidelberg Castle from Germany, and Cité Internationale Universitaire de Paris. As well as from Freiburg, Burgundy, Bologna, Windermere, Luxembourg, Bruges, Oxford and Grenada. 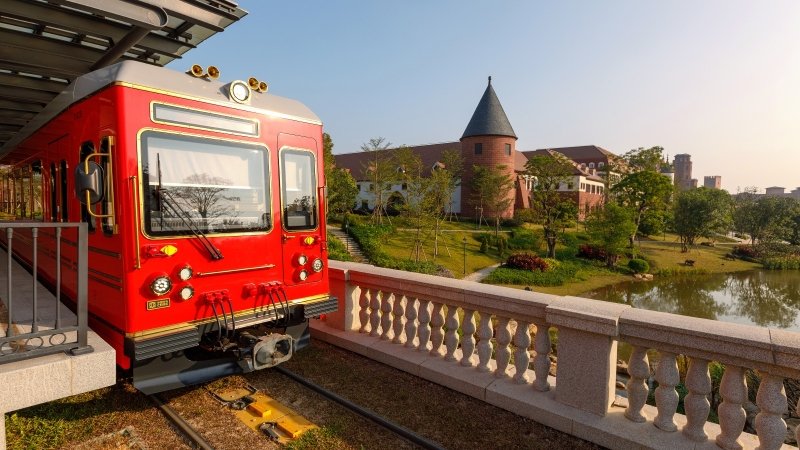 The zones are connected together using a tram system modelled on trains supplied by Stadler Rail for the Jungfrau Railway in Switzerland – the main mode of transport around the campus which runs 7.8 kilometres. 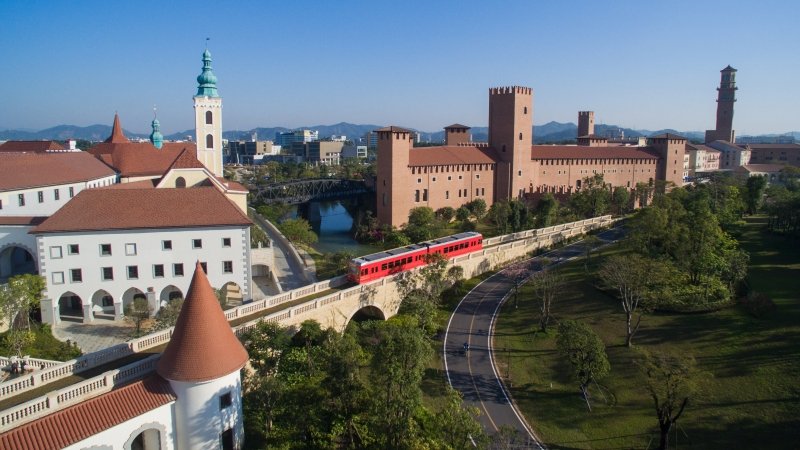 With many of the megacities in China and Shenzhen already taken up by skyscrapers, the architects wanted to avoid the oppressive weight of a single, massive building imposed on the landscape.

Instead, they created human spaces, in relaxed harmony with the environment, to provide a counterpoint and release from the pressures of work. They are also a nod to founder Ren Zhengfei’s training as an architect and engineer. 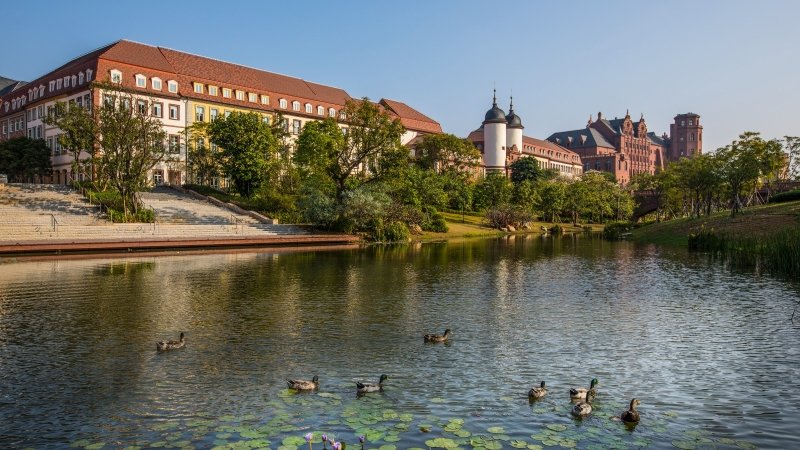 “Disruptive innovations are valuable to the company even if they are ultimately proven to be failures,” said Huawei’s CEO and founder Ren Zhengfei at a meeting in August with the Central Research Institute’s Innovation Vanguards that included scientists, experts, and interns.

“That is because we would have cultivated a large group of talented people during the process. Failures experienced by our R&D department have cultivated many heroes at Huawei.”

One thing Huawei understands about developing talent for the future is planning for the long game not just in projects, but in its people. “Your contributions to future basic research might be seen only dozens of years or even hundreds of years later,” Ren added at the same meeting. “Your papers might be like Vincent van Gogh’s drawings, which attracted no attention for over 100 years, but are now priceless.”

ALSO READ: Doing a U-turn on how we work “We don’t require the same person to concurrently make contributions to these two goals: ‘Survive today’ and ‘build for tomorrow’.”

Part of that strategy, said Ren, is attracting global talent. “We must open up our minds, emancipate our thoughts, and boldly attract the best people from around the world.”

“Our company is now in a critical period of strategic survival and development, so we must have the required talent as we charge ahead.”

This approach is two-pronged for the technology firm. First, it plans to recruit global talent by benchmarking employee compensation against local talent markets, while offering compensation packages that are attractive to senior talent.

“To succeed in the future, we must recruit people who are more capable than us,” Ren said. “Our compensation packages must align with international talent markets, higher than those offered by local talent markets. This is necessary to attract the best talent.”

The other approach is through creating opportunities for digital talent through comprehensive training, competitions, and job fairs. Huawei’s programmes such as ‘Seeds for the Future’, and the ‘Learning Academy’, leverage decades of experience and expertise to help tackle ICT workforce challenges in APAC.

Huawei may have predicted 30 years ago today’s technologies such as 5G, cloud computing, big data, AI, IoT, and blockchain, but to keep pace with the future it predicts the need for wide-scale digital upskilling of talent and people. In 2013, Huawei launched its ICT Academy, a school-enterprise cooperation project that involves higher education institutions and industry-leading enterprises in 72 countries and 103 ICT centres in Asia Pacific by 2020. “Together with our partners, Huawei will invest US$50mn in the next five years to develop 500,000 digital talents in the Asia Pacific region,” Liu announced in his keynote speech at The Asia Pacific Innovation Day – Digital Talent Summit 2021.

Its flagship CSR programme – ‘Seeds for the Future’ – was launched in 2008 in Thailand and selects top university students to receive technology training on cross-cultural exchanges. It is now in 131 countries and regions, reaching 9,000 students from over 500 universities. 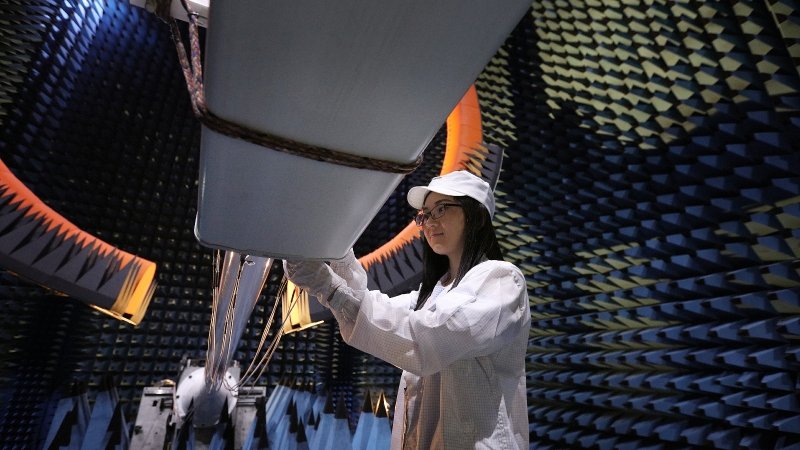 In July 2021, Huawei announced its Seeds for the Future programme 2.0, through which the company plans to invest US$150mn in digital talent development over the next five years. This programme is expected to benefit more than three million additional people.

Additionally, Huawei has announced the ASEAN edition of the Seeds for the Future initiative. In partnership, the ASEAN Foundation and Huawei ASEAN Academy will strive to build the digital capacities of youth in the 10 ASEAN member states so they can thrive in the era of the digital economy.

“Innovation and development rely on a talent ecosystem. Huawei is prepared to work with its partners to build a talent development ecosystem conducive to innovation,” Huawei’s Senior Vice President and Board Member, Catherine Chen, noted during her opening remarks at the summit.