Employers in Hong Kong, Singapore and Malaysia at risk of losing talent

Brain drain should be a cause for major concern for employers in Hong Kong, Singapore, and Malaysia, Randstad warns. Latest research conducted by the global recruitment firm shows employees in the three countries are more willing than the global average to emigrate for a job.

Over half (56%) of respondents in Hong Kong said they would be willing to emigrate for a job that’s not available in their country. In Singapore and Malaysia the percentages are slightly higher at 61% and 66% respectively.

All three countries score above the global average of 50%. When looking at different demographics, men are more likely to emigrate for a job than women, while younger employees between 18 and 34 are more willing to move than their older counterparts.

According to the results, the group giving the most cause for concern is male employees based in Malaysia, with 72% indicating they would be willing to emigrate for a career opportunity they can’t find within the country. 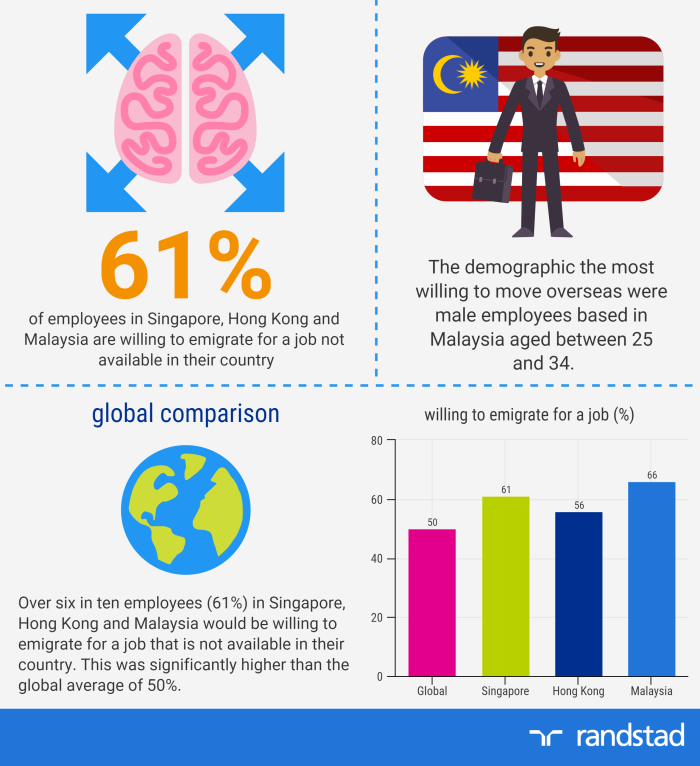 Out of the 33 countries included in the survey, companies in Denmark have the least to worry about, with 34% of respondents being willing to emigrate for a job. Employees in Mexico are the most eager to leave: 83% said they would move abroad for a career opportunity.

Commenting on the results, managing director for Randstad Singapore, Hong Kong and Malaysia, Michael Smith, noted that employees in the region have clearly understood that companies around the world are scrambling for skilled talent, and are more willing than ever to consider options outside of their countries.

He said: “The war for talent is being fought on multiple fronts, between organisations and between countries. Organisations need to be ever vigilant with their top talent, even if they have the best offerings compared to their competitors, overseas opportunities may still be stronger, potentially drawing their workforce away.”

HR professionals, have you heard these excuses to quit?

The “Ramadan effect” on the workplace

A new study looks into how employers and staff feel the Holy Month affects productivity and efficiency. ..

Office romance friendly policies boost productivity as having a promising career can be an advantage in romantic relationships...

Yet just over half reported their organisations having formal goals to this target. Is a gender-diverse workforce really within re..

The accused had sent several text messages since July 2014 to a woman who was found in possession of contraband cigarettes...