Where does Hong Kong rank for English proficiency? English is considered the world’s lingua franca. Cities with higher English proficiency are generally more competitive for business, but where does Hong Kong sit among its Asian neighbours?

According to Education First’s annual English Proficiency Index – which ranks 100 countries and region by English skills – Hong Kong possesses ‘moderate proficiency’ (ranking fifth in Asia). This puts it on a par with Malaysia, South Korea, mainland China, Italy and Spain.

Of other Asian jurisdictions, the Philippines was the only country to be categorised as having ‘high proficiency’, while Singapore was the sole Asian representative with ‘very high proficiency’.

The Lion City, in fact, ranked tenth globally, while the Netherlands boasted top spot for English proficiency, with Scandinavian countries – Denmark, Sweden, Finland and Norway – rounding out the top 5.

In other findings of the report are that English proficiency is improving overall and that English and innovation go hand in hand.

“English is the principal language of international collaboration, and as with previous editions, we found correlations between English and various measures of investment in R&D,” the report states.

“English-speaking teams are able to attract more diverse talent and access to ideas from around the world. They are also more likely to collaborate internationally within their own organisations.”

The report also revealed that countries with high English proficiency are fairer and more open, that managers speak the most English and that adults in their late twenties (aged 26–30) have the best English skills.

English also has advantages when it comes to global connectivity.

“We often see English proficiency presented as a competitive advantage, but our analysis suggests that it is equally significant for the connections it enables. These connections may help individuals find better jobs or start their own business, but they are also intrinsically valuable,” the report states.

“Connection is one of the defining characteristics of the global citizen – curiosity, contact and a sense of shared responsibility beyond one’s own borders. English today is all about connection.”

In terms of Asian rankings, the top 15 countries and regions for English proficiency were: 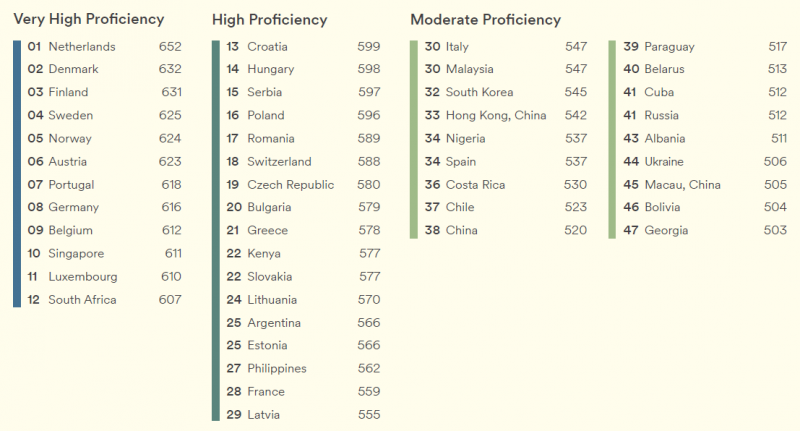