The aspect of wellness most Singaporeans overlook

Even with the increased focus on wellness nowadays, one aspect is still being overlooked by most Singaporean workers – financial wellness.

While more were taking their health seriously (with 85% exercising at least once a week and 88% trying to eat healthily), the majority of Singaporeans were behind on most indicators of financial wellness. This was according to the inaugural OCBC Financial Wellness Index which assesses how well people in Singapore fare across 10 pillars of financial wellness.

Polling 2,000 working adults aged between 21 and 65, OCBC Bank revealed Singaporeans scored an average of 63 on the index, meaning that they have started but are behind on most indicators. About 64% of respondents fell into this category, while 19% had ‘started and are ahead on most indicators’. Another 19% were ‘starting/intend to start’, and 1% ‘have not started’.

The index showed that most Singaporeans were good at the basic financial habits (saving regularly, having insurance, and being able to stick to a budget). 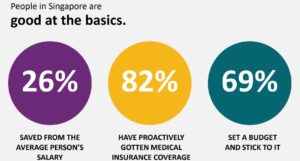 However, many still lag in terms of growing their wealth through investing and building up enough funds for a rainy day or retirement.

When it comes to investing, about a third (34%) did not invest, 48% had no passive income, 36% had investments that are not performing to their targets, and 27% were investors who speculate excessively for quick gains. Worryingly, 33% thought of investing as a form of gambling and 37% didn’t know the best way to grow their money.

Apart from that, with only 42% being on track to accumulate enough funds for an emergency and 51% being able to stretch their savings to last for six months, many Singaporeans were ill equipped for financial emergency.

These financial gaps meant two in five had worried about money the week they were surveyed.

Notably, parents – especially those sandwiched between providing for their children and supporting elderly parents – were among the more financially stretched, with 51% finding it tough to financially support both sides. On the bright side, this group of parents were also making more efforts to achieve financial stability. 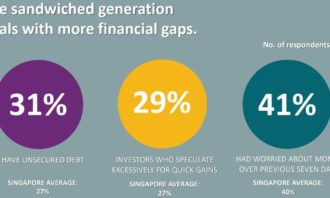 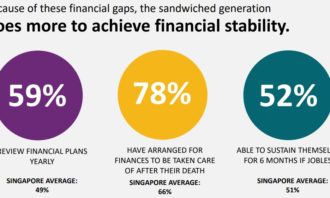 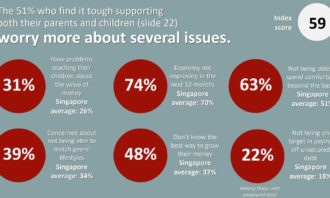 From there, respondents were asked to answer 44 questions about 26 indicators which, taken together, paint a comprehensive picture of one’s financial wellness. Based on how they answered the questions, respondents were scored on each pillar, adding up to give an individual’s overall score ranging from 0 to 100.

Based on their overall score, respondents were classified into various stages of financial wellness.

All 2,000 respondents’ collective scores were then averaged out to come up with the overall Index score.

The AOL manager fired by Tim Armstrong in front of 1,000 people earlier this week isn't the only employee to have suffered a rathe..

This security solutions' MD is investing a six-figure sum to review the firm's HR programme. Find out how he partners with the HR ..

Read about how these employers cater to their employees' wellbeing and focus on their older workers, as shared by Minister Zaqy Mo..