Companies that have more than 30% of women on their boards reflect better financial performance, a new study has revealed.

Titled Board Gender Diversity in ASEAN, the study was jointly launched by the International Finance Corporation, the Women’s Empowerment Working Group, and the Indonesia Stock Exchange.

As part of this study, an analysis on six ASEAN countries – Singapore, Malaysia, Indonesia, the Philippines, Thailand and Vietnam, found Thailand to be the most gender diverse in terms of board representation. Women hold 20.4% of board seats in listed companies in the country, while Vietnam had 15.4% and Indonesia had 14.9%, coming in second and third respectively.

On the other hand, Singapore had the lowest percentage of women on boards at 11.9%, the Philippines at 13.2%, and with Malaysia coming in close at 13.5% – contrary to a recent banks-focused study which ranked Malaysia the top in Southeast Asia for board diversity in banks.

Amongst the six countries, the percentage of women on boards is as follows: 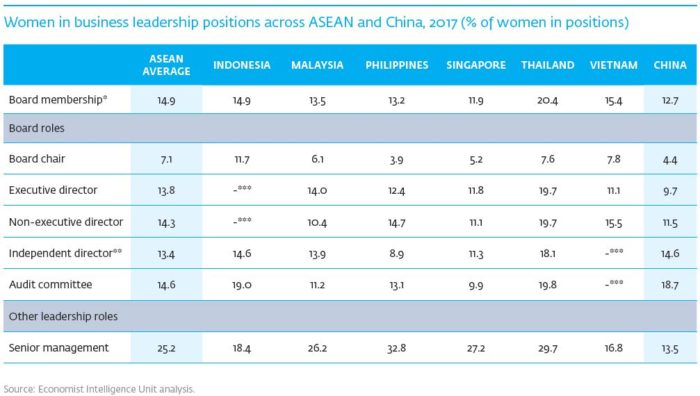 Further, Indonesia was found to have the highest proportion of female board chairs at 11.7%, followed by Vietnam (7.8%), and Thailand at 7.6%.

When it comes to senior management roles, the Philippines topped the region for its percentage of women in such positions (32.8%). Thailand was next with 29.7%, while Singapore rounded off the top three with 27.2%.

According to the study, having women on board committees and handling responsibilities such as audits and compensation, helps create a more transparent corporate environment.

In fact, another study cited found a positive link between board gender diversity and the performance of firms with ‘weak governance’ – thus suggesting that women’s commitment to monitoring responsibilities plays an important role in performance.

In addition, by hiring more women as board members, a company will be able to attract top talent to drive operational excellence, the study found.

This is especially important in ASEAN, where more than 70% of senior executives involved in a Human Capital Leadership Institute study said their companies struggled to build a ‘steady supply of top talent’.

Photo and infographic / Board Gender Diversity in ASEAN report

The most complex places to do business in Asia Pacific

A full selection of  classes and resources will be offered, in efforts to boost the labour market by re-training and upskilling wo..

The boss’s most memorable interview mistakes

From eating hard-boiled eggs to falling asleep, employers share a bunch of blunders candidates have made during interviews. ..

Mums returning to work must be “more reasonable”

Despite pregnancy discrimination being witnessed by many HR managers in Australia, 35% believe mothers are unreasonable when negot..

She will partner with HR and business leaders to strengthen the focus on talent, and build a comprehensive talent management platf..