Smileys at work: 36% of staff use emojis mostly with peers at their own level

In an Adobe study focused on 1,000 emoji users in the US, laughter, love and kisses are users’ favorite emojis, both individually and as pairings. While these emojis are the most popular for women, for men the crying emoji makes it to the top three most commonly-used.

The survey comes soon after World Emoji Day was held on 17 July.

Text messages remain the communication form of choice for emoji use for 82% of users. Among the social media apps, emoji use on Facebook (48%) is much higher compared to Instagram (21%), Snapchat (18%) or Twitter (6%).

Further, respondents said they most commonly use emojis for the following recipients: 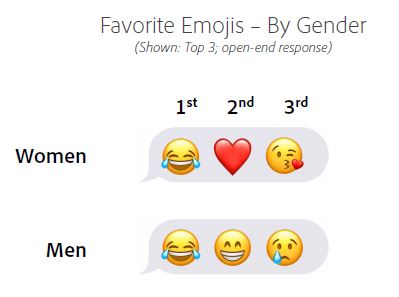 When emojis are used at work, the majority of emoji users felt they positively impact the likability of the person communicating with them (78%) and made positive news feel more sincere (74%). Just over half (53%) also agreed that emojis make negative news or feedback easier to accept.

More than half of emoji users (58%) also said they are more likely to open emails from brands that include emojis in the subject line.

Going forward, three in four users (76%) wish more emojis were available, including more emoji customisation options to better reflect their personal appearances. However, topping the wishlist for more emojis was “food/drink/snacks” cited by 14% of respondents. One user noted: “I wish there were more international food emojis to choose from, especially Asian cuisine.”

New programme to equip staff in Singapore with skills for internationalisation

A company director who sent young professionals mean rejection letters telling them they were “inappropriate” and “tacky” has back..

Are these the top killers of your workplace culture?

HR thinks a stressful environment is causing the worst impact in the office, while staff believe it's the lack of manpower...

AIA’s take on health and wellness through The Music Run

With activities such as Get Active, Vitality Leap, FitSpo, and Ignite! at the AIA area to keep runners engaged, we find out more o..

More than a third of expats moved to improve their earnings, with expats here earning USD56,000 more than the global average...