This was revealed in MOM and TADM’s inaugural Employment Standards Report on Friday (11 October), released in line with both organisations’ joint efforts in improving workplace practices and resolving employment disputes.

Further, among foreign employees, the number of salary claims last year was thrice that of local employees, i.e. 4.45 salary claims per 1,000 employees. According to the report, a majority of these claims came from foreign workers in the construction sector.

The top six types of salary claims filed by employees 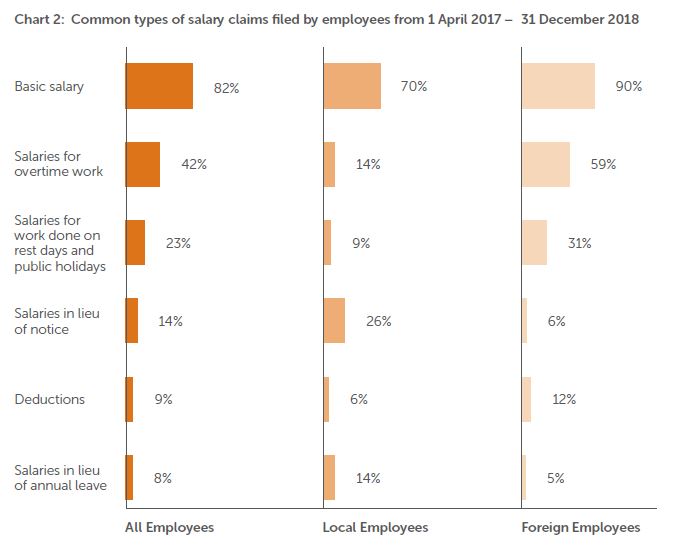 Basic salary claims took the top spot as the most common type of salary claims filed in the period of 1 April 2017 to 31 December 2018.

Based on the report, these basic salary claims took place mainly due to issues such as business failures, and technical breaches which arose due to “employers’ lack of understanding of legal requirements such as errors in calculation or late payroll scheduling.”

Additionally, for foreign employees, another contributing factor was employers’ illegal downward adjustments of employees’ salaries, without their consent and without first informing MOM.

Reasons cited for this included business failures, as well as “poor awareness among small and medium enterprises” of the legal requirements.

Disputes over this often arose due to, employees not knowing that a leave approval is required during their notice period, and an unclear number of days of annual leave balance as employers did not keep up-to-date leave records.

*Note: An employee may file salary claims across multiple claim types. Therefore, the sum of the proportions exceeded 100%. The salary claim types in the table are not exhaustive.

85% of salary claims were resolved within two months of lodging

Amongst the salary claims lodged between 1 April 2017 and 31 December 2018, a total of 85% were concluded within two months, while the remaining complex cases took between two and six months to be resolved at TADM.

Here, 84% of the claims were resolved at TADM, while the remaining claims were then referred to the Employment Claims Tribunals (ECT) for adjudication.

Apart from the above, 88% of employees who filed claims had either fully recovered their salaries at TADM or at the ECT, totalling to S$29mn.

Refer to Annex A of the report for MOM’s advisory to employers on payment of salaries under the Employment Act.

Those who scored excellent results in the 2017 public examinations were presented with cash rewards that totaled to some RM228,800..

Why you shouldn’t have secrets at work

Here’s why you should invest in a nice coffee machine

A recent study found that for each two additional cups of coffee per day, there was a 22% lower risk of all-cause mortality...

Dad’s now the word at Cerebos

With up to S$5,000 worth of benefits on offer to new parents, Michael Yeong decodes the value created through such initiatives...