This growth in employment was generally attributed to the services sector (7,200 excluding FDW). Breaking this down further, the employment growth in services was led by:

These outweighed declines which mainly came from retail trade (-2,400), and accommodation and food services (-1,600). Employment in manufacturing (-100) and construction (-700) continued to contract, though the decline has eased considerably from the preceding quarters.

All data is from the Labour Market Report Second Quarter 2018 by Ministry of Manpower.

Despite the growth in employment, retrenchments in Q2 2018 (3,030) were higher than the previous quarter (2,320); although they remained lower than the same period a year ago (3,640). The top reasons for layoffs? Business restructuring and reorganisation, accounting for close to two-thirds.

Professionals, managers, executives and technicians (PMETs) formed the majority (79%) of all retrenched residents, and were over-represented relative to their overall workforce composition.

Sectorally, the bulk of the retrenchments (57%) came from services, mainly in wholesale trade, professional services and financial services. 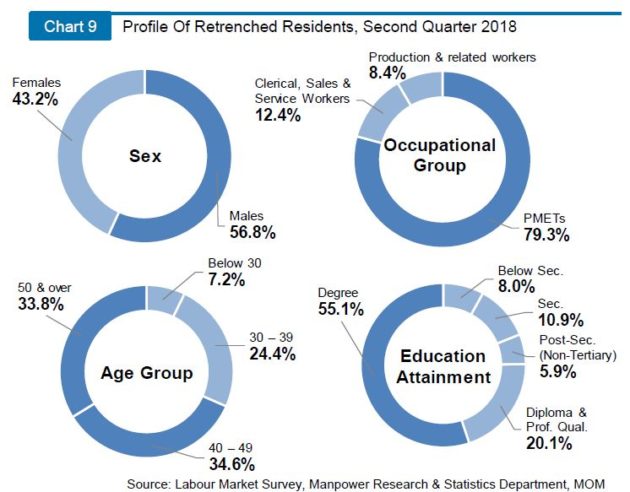 The average total weekly paid hours worked per employee rose marginally to 44.9 hours in June 2018 from 44.8 hours a quarter ago, reflecting the  increase in paid overtime hours from 2.8 to 2.9 hours. Nevertheless, the hours worked remained lower than a year ago (total 45.2; overtime: 3.0).

The uptick over the quarter was led by retail trade (+0.8), and electronics (+0.5). Over the year, sustained increases in paid hours worked were observed in wholesale trade, information & communications and cleaning and landscaping.

Read about how these employers cater to their employees' wellbeing and focus on their older workers, as shared by Minister Zaqy Mo..

A range of minimum sums as well as flexible withdrawal options are top recommendations by the Advisory Panel...