In the just-launched Labour Market Report Second Quarter 2019 by Singapore’s Ministry of Manpower (MOM), trends suggest that employers are retaining their existing workers despite economic headwinds.

The decline in layoffs was broad-based, but in particular electronics. There were fewer retrenchments among production & related workers (1,350 to 340) and clerical, sales & service workers (440 to 290); but layoffs among professionals, managers, executives & technicians (PMETs) rose from 1,440 to 1,680.

As such, the majority of retrenchments in Q2 2019 were from services (72%), led by wholesale trade (19%), financial services (17%) and professional services (11%). Restructuring and reorganisation remained the key reason cited by establishments for retrenchments.

NTUC Assistant Secretary-General Patrick Tay has analysed the trends: “For the first half of 2019, despite the current global trade tensions, we did not see a huge spike in retrenchment figures compared to the same period last year but there is a weakening of the labour market.

“I expect companies and businesses to be more conservative and cautious, especially in hiring in the latter half of 2019 with the continued US-China trade tensions. We will continue to see different measures undertaken by companies in different industries as they cope with the global trade crisis while managing transformation and technological disruption.”

Data relating to this trend is reflected in the below infographic: 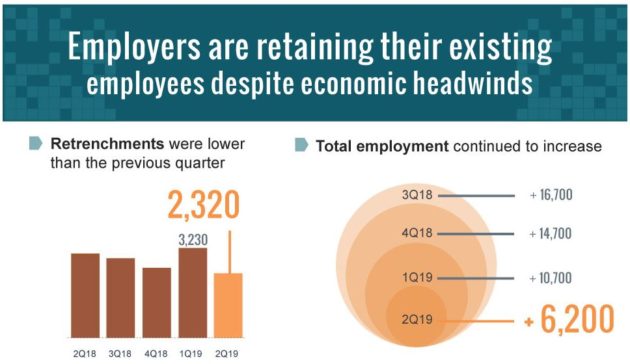 Given that there were fewer retrenchments across major industries in Q2 2019; the report found that instead, more employees were placed on short work-week or temporary layoff.

Due to the rise in utilisation of this feature, the report included a technical note on the phenomenon, stating that the number of employees placed on short work-week or temporary layoff is usually read as an indication of economic slowdown.

Key pointers from the technical note on short work-week and temporary layoff:

Among the other highlights of the report are:

Human Resources is proud to announce the launch of HRjobs – the region’s largest online collection of dedicated HR positions, deli..

6 lessons from The Wolf of Wall Street

If you remove the depraved and morally bankrupt behaviour, there are a few lessons for success leaders and entrepreneurs can learn..

Reportedly, most of the staff in Twitter's Hong Kong office will lose their jobs - only one and a half years after the office open..

Is it the Workaholic or the Delegator? Knowing these traits will help you better understand how to help your employees in rough si..

Is it possible to have ‘too much’ talent?

According to a new study, having too many 'superstars' on your team could cause overall performance to suffer. ..