According to a statement by Singapore’s Ministry of Manpower (MOM), Chemical Industries (Far East) was fined S$200,000 for a chlorine leak from a 1-ton container at its Jalan Samulun storage facility, which occurred on 4 September 2016.

As a result of the leak, two emergency responders and five members of the public outside the workplace were exposed to the escaping chlorine gas.

Chemical Industries (Far East) had pleaded guilty to a charge under section 12(2) of the Workplace Safety and Health Act for failing to take reasonably practicable measures necessary to ensure the safety and health of persons who may be affected by its undertaking.

On 4 September 2016, liquid chlorine leaked from a 1-ton cylinder (ton container) stored in a chlorine storage facility occupied by Chemical Industries (Far East). This triggered an alarm from one of the chlorine detectors , and a worker activated the chlorine gas emergency scrubber and exhaust system.

Two workers then donned personal protective equipment and attempted to stop the leak, but were unsuccessful. The company then called in the SCDF, and the leak was mitigated shortly after.

Two SCDF responders and five members of the public outside the workplace were momentarily exposed to the leaked chlorine gas. They were admitted to Ng Teng Fong hospital for treatment, ranging from eye irritation to difficulties in breathing, and were discharged on the same day.

Investigations revealed that the company had failed to maintain the integrity of the fusible plug of the chlorine ton container, which was found to be severely corroded (photo below) and resulted in the leak. 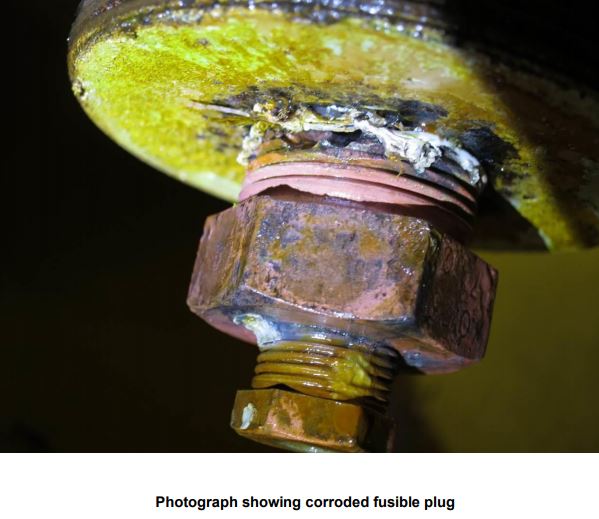 On the day of the leak, the ton container had to be rolled over to position the leaking fusible plug to its topmost position which would convert the liquid leak to a gas leak. However, when the incident occurred, the worker was unable to do so as the leaking container was stored between many other ton containers with no gaps (photo below). 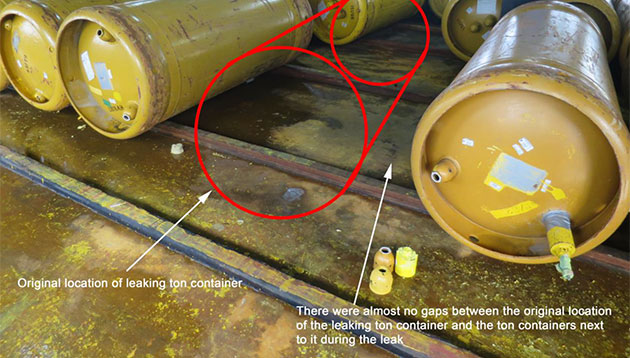 Investigations also revealed that the company failed to install its emergency scrubber and exhaust system according to design and maintain a safe air change rate in the workplace.

Some of the suction pipes were found to be covered with mesh filters, and no calculations were conducted to verify that these filters would not reduce the flowrate of air into the emergency scrubber and exhaust system (photo below). 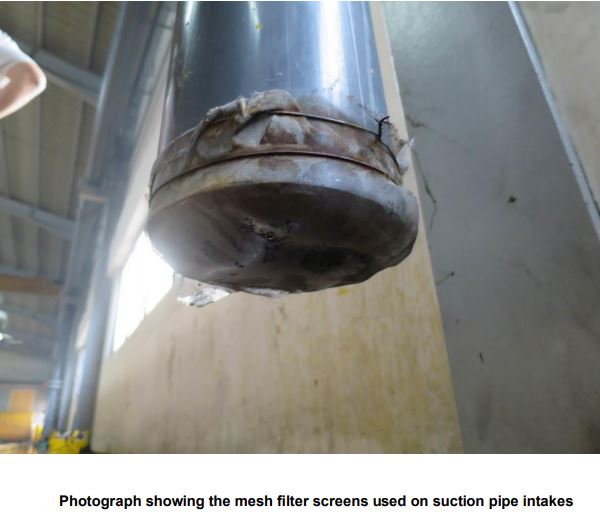 Air flowrate measurements from the suction was not conducted to verify the efficiency of the exhaust system, and investigations revealed that the rate at which the contaminated air was extracted did not meet general ventilation standards.

Er. Go Heng Huat, MOM’s Director of the Major Hazards Department, said, “The company had failed to properly maintain and store the ton containers, establish a proper emergency response plan to address chlorine leaks and implement an effective exhaust system for extracting and channelling contaminated air to the scrubber.

“The multiple safety breaches showed a clear disregard of the hazards at the workplace and had posed a safety risk to the public. The MOM will not hesitate to prosecute companies that flout safety regulations.”

Preparing for retirement: Are Singaporeans ready to turn 100?

Trivial tasks that keep employees from getting work done

3 ways for leaders to build a happier workplace

Managers can help take the first step toward eliminating stigma around mental health and ensuring staff have the support they need..

Future-proofing yourself as a strategic leader

It's not just about understanding HR technology, it's about using it to take a more strategic role in your organisation...

What do Singaporeans want most at work?

Google, Marriott, and Ericsson top the rankings, based on workplace trust, pride and levels of camaraderie...