MOM: 85% of claims filed under the Employment Claims Act resolved at TADM

For instance, Member of Parliament (MP) Anthea Ong raised a question on the following in 2017 and 2018: number of salary claims filed respectively by local employees and foreign workers at the Employment Claims Tribunal (ECT); number of court orders issued to errant employers to settle salary claims; and number of orders which remained unpaid one month after the orders were issued.

In response, Manpower Minister Josephine Teo said 85% of claims filed under the Employment Claims Act were resolved at the Tripartite Alliance for Dispute Management (TADM).

At the same time, the remaining 15% of claimants were referred to the Employment Claims Tribunals (ECT), of which 5% had withdrawn and 10% filed for adjudication.

Minister Teo added: “Two-thirds of the adjudicated claims resulted in money orders issued to employers to settle the salary claims; this proportion is similar for both local and foreign employees.”

Further, half of the claimants referred to ECT received full payment from their employers, while 16% reported partial payment and 36% reported no payment. According to Minister Teo, partial or no payment usually resulted when employers were facing financial difficulty, or large accumulated salary arrears before the employee reported to TADM.

Minister Teo also said the MOM is investigating and prosecuting employers who “willfully refused to pay despite having the means to do so.”

Number of salary claims filed by employees at ECT

Question on government support for PCP, CSP and SEC

Separately, MP Foo Mee Har asked: The number of companies who have tapped on government support for the Professional Conversion Programme (PCP), Career Support Programme (CSP) and Special Employment Credit (SEC) respectively, details of these companies, and what needs to be done to onboard more companies to participate in these schemes.

Minister Teo replied that since the launch of Adapt and Grow (A&G) in 2016, more than 2,000 companies have partnered with Workforce Singapore to offer PCPs, which provide training and salary support to employers who hire and reskill mid-career jobseekers in professional, manager, executive and technician (PMET) roles.

Further, about eight in 10 of these companies are SMEs, where the three most participative sectors are education, financial services and general manufacturing.

As for CSPs, nearly 2,000 companies have tapped on it since introduction in October 2015. About seven in 10 are SMEs, and the three sectors with the most participating companies are infocomm and media, professional services and wholesale trade.

Minister Teo said: “The success of A&G programmes such as PCPs and the CSP depends on the willingness of employers to give opportunities to mid-career Singaporean workers, including those who may not have the full set of skills and experience preferred for the job, but have the potential to do the job with some effort in training or after a period of adjustment.

Lastly, Minister Teo said the SEC programme provides wage offsets of up to 11% to employers that hire older workers aged 55 and above, earning up to S$4,000 a month.

She added: “The wage offsets are automatically disbursed to employers based on their CPF contributions for eligible employees. From 2017 to June 2018, SEC has benefited about 108,000 employers hiring close to 423,000 older workers.

“The top three sectors with the most employers receiving SEC are food services, wholesale trade, and retail trade.”

Reasons for and enforcement actions taken against non-reporting

Minister Teo added: “Non-reporting of work injuries by employers are usually detected when an employee or his representative files an incident report to MOM.”

In line with this, MP Ng raised a question on the number of employers who have been prosecuted for failing to report such injuries,a as well as how many of these employers have been punished with a fine or imprisonment respectively.

In response, Minister Teo said non-reporting occurs mostly either because employers disputed that the injury was work related, or because the employer was not informed of the injury.

She said: “Before 2018, we focused on educating employers to have better systems to detect and surface injuries suffered by their employees, and to report injuries brought to their attention even if they believe the injuries were not work-related.

“Since the start of 2018, we have stepped up our enforcement efforts which led to an increase in the number of employers being taken to task for non-reporting.”

The following data was provided: 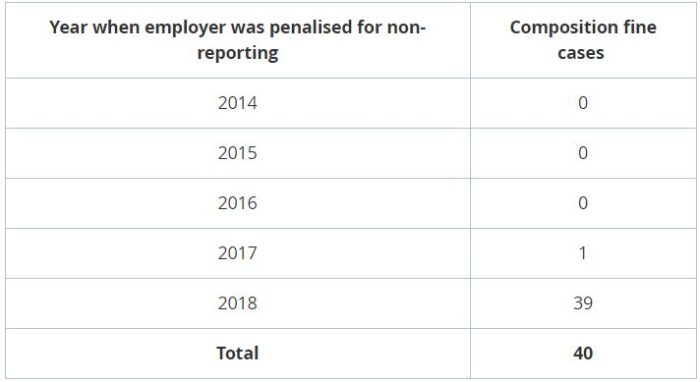 Further, according to Minister Teo, a site manager was convicted in 2016 for attempting to cover up a workplace accident, by abandoning the injured worker along an alley. He faced six months’ jail. Aside from this, there has been no other case of non-reporting which resulted in imprisonment.

“The industry and occupation profile of injured workers seen by the public healthcare institutions and private healthcare providers are similar.”

She added that nonetheless, a bigger proportion of cases handled by public healthcare institutions involve serious injuries such as fractures, dislocations and crushing injuries, compared to the private healthcare providers.

“Correspondingly, private healthcare providers have a larger proportion of less serious cases, such as bruises and sprains, compared to public healthcare institutions.”

Aside from the above, MP Ng also asked whether the Ministry will consider expanding the Foreign Construction Worker Directory System (FCWDS) to other sectors such as the cleaning sector, as well as incorporate the FCWD portal on mobile applications targeted at foreign workers.

Minister of State for Manpower Zaqy Mohamad replied: The FCWDS was set up in 2015 by the Singapore Contractors Association Limited (SCAL) to facilitate job matching between employers and foreign workers in the construction sector.

“The Construction industry finds it useful to develop the FCWDS to flexibly redeploy workers across companies given that the work is cyclical and mainly project-based.”

He added that so far, the Ministry has not seen another industry express interest in setting up a similar directory.

“The FCWDS has been incorporated into a third-party mobile app owned by the private sector, called the FWapp, to improve its accessibility to foreign construction workers.”

Staff of 9 departments and agencies can apply for postal voting

Some of the departments involved are the Malaysian Maritime Enforcement Agency, prisons department, fire and rescue department, an..

"We have lost trust in the current management. Staff morale is very low due to a lack of leadership and direction."..

7 signs of a toxic work relationship

Being successful in your career depends on your ability to relate to people. Here are some warning signs you’re already in a bad r..

Bonuses to increase next year

But pay hikes are likely to remain steady in Singapore and other regional markets. ..