World Economic Forum has shown that Malaysia has ranked 104th globally in its latest Global Gender Gap Report. In comparison, the Philippines claimed 10th position making it to the top 10 list of the Global Gender Gap Index. 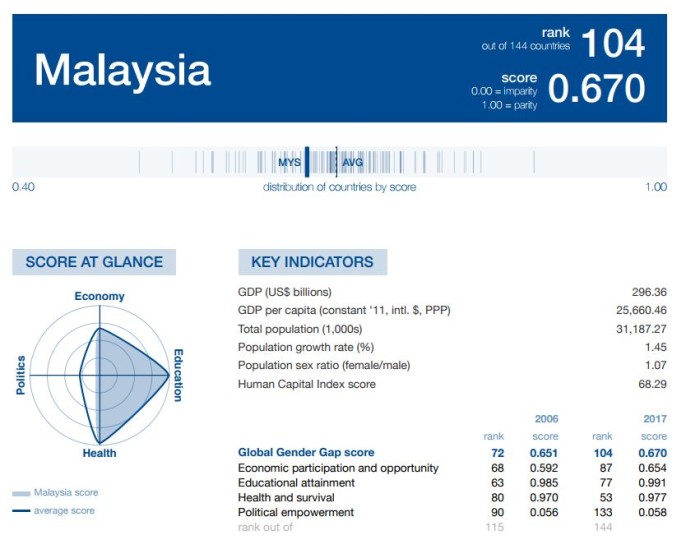 However, the report showed that Malaysia ranked quite high (12th) when it comes to wage equality for similar work. The response was gathered from a survey question: “In your country, for similar work, to what extent are wages for women equal to those of men?”

With 1 being “not at all, significantly below those of men”; and 7 being fully, equal to those of men), the data is converted to a normalized 0-to-1 scale. On this, Malaysia scored 0.782.

Additionally, Malaysia continues to record small but steady progress on closing its women’s share of estimated earned income. In fact, the country has fully closed its gender gaps in primary, secondary and tertiary enrolment.

Measuring the proportion of the country’s working-age population that engages actively in the labour market, either by working or looking for work, Malaysia ranked 105 (score: 0.651). However, this data doesn’t take into account workers employed abroad.

On another note, the report also measured the adult unemployment rate in the country. This refers to the share of the labour force aged 15 to 64 that is without work, but available for and seeking employment. In Malaysia, females scored 3.4, with males scoring 2.9 – resulting in a value of 1.16 when it comes to adult unemployment in Malaysia. 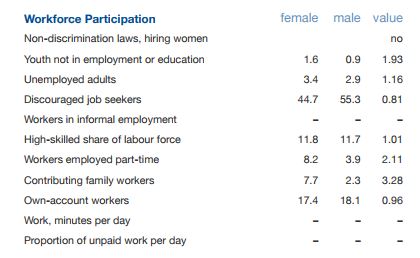 On economic leadership, Malaysia has no law mandates for equal pay. In fact, it scored 0.34 for firms with female co-owners, with a score of 1.4 for female employers (male: score of 2.3).

However, on the bright side, Malaysia prime minister Najib Razak has mentioned in the Budget 2018 that it would be the Year of Empowerment of Women. Especially now that it will be mandatory to have 30% women in GLC’s board of  directors, GLIC & statutory bodies before the end of 2018. 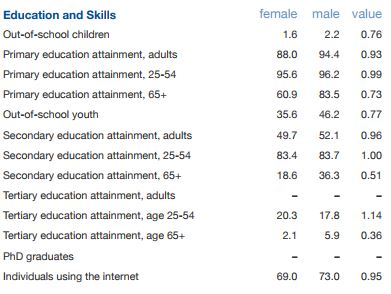 In comparison, Singapore ranked 65th has dropped its ranking from last year (2016) as the nation is reported to continue widening its gender gap in estimated earned income on the report’s revised scale for this indicator. However, the country records small improvements elsewhere on the economic participation and opportunity subindex – most notably, on women’s labour force participation and progression, including a multi-year trend towards near-parity in technical and professional workers. 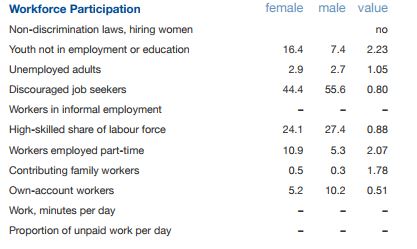 The report benchmarks 144 countries on their progress towards gender parity across four thematic dimensions – economic participation and opportunity, educational attainment, health and survival, and political empowerment. In addition, this year’s edition also analyses the dynamics of gender gaps across industry talent pools and occupations.

Felda Global Ventures introduces VSS for general managers and above

How Millennials are redefining employee satisfaction

Stop making female employees compete with each other

A new study suggests a competitive workplace isn't always the answer, especially when trying to help women get more creative. ..

How long to stay at a company: Employers say 3 years, staff say 6 months

The mismatch in expectations is related to data that shows 95% of employers Singapore saying they would not be comfortable hiring ..

A guide to drinking on the job

Are you too fussy when hiring?

Three reasons you could be missing out on star talent and how to change it...