Look for the silver lining in your office: The top 10 positive traits we see in others

Seeing the good in others really helps. A vast majority (93%) who have great personal relationships with their co-workers also believe they are fundamentally good humans.

This was according to a new study by 1-800 Contacts, which surveyed 1,012 people using Amazon’s Mechanical Turk platform (that included an attention-check question to ensure that all respondents took the survey seriously).

Apart from the data point above on co-workers, the study also found that although people tend to feel animosity toward their boss, or see them as an authority figure, more than 90% do believe their boss is a good person and has good intentions.

When co-workers get along, office life is simply better, and this positivity seemed to work in the optimists’ favour. More than 70% of respondents who believed that people are inherently good said they were satisfied with their job, compared to 50% of less-optimistic folks.

Additionally, 63% of optimists had received a raise in the past year, compared to 52% of people who weren’t convinced that human nature is fundamentally good. 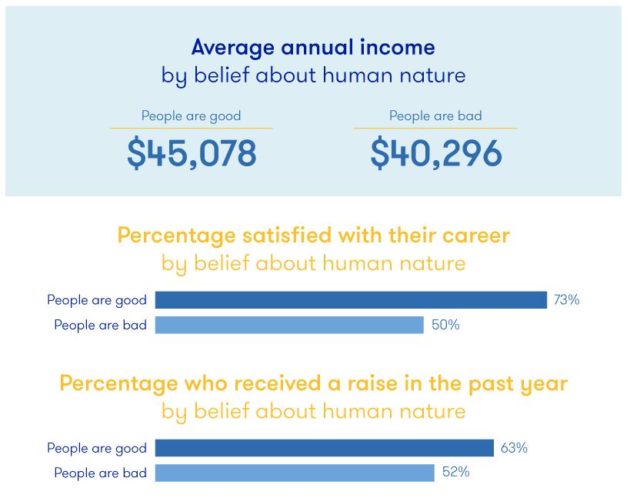 More interestingly, the study found the top 10 positive traits that people tend to see in others, and the most popular on the list were compassion, adaptability, and cooperation.

The top 10 positive traits that people tend to see in others:

However, when the data was sliced by generation, a much starker difference was revealed. The percentage of people who felt that people are inherently good was inversely correlated with age.

While just 9% of Baby Boomers had a negative opinion about human decency, that figure skyrocketed to 25% among Gen Zers, the youngest of the bunch. Gen Xers and Millennials found themselves right around the average of 83% reporting people to be good as a whole.

Pain-related productivity losses cost companies US$44.6 billion across Singapore, Malaysia, Indonesia and the Philippines in 2016...

The Body Shop Malaysia called out for discriminatory job posting

A job posting in one of its branches stated that the store was exclusively hiring ethnic Chinese candidates. ..

Dual career families are the number one challenge to talent mobility

With both partners earning well, it is getting harder for companies to uproot either one to send on a mobility assignment. ..