While IR 4.0 has dominated the news in recent years, a whitepaper by INTI International University & Colleges and International Data Corporation has revealed that students, graduates, and parents still lack clarity about what it entails.

Of the more than 560 respondents (comprising students, graduates, and parents) surveyed,  63% of the students and graduates were unable to articulate what IR 4.0 entails. Similarly, 54% of the parents lacked a clear definition and ability to discuss IR 4.0 and why it was relevant to organisational transformation.

In that line, 30% of students believe they are completely unprepared for an IR 4.0 enabled workplace. A similar percentage 28% cited that their academic experience at university was the only exposure they were receiving about IR 4.0, and that they had not undertaken any other training or work experiences to enhance their understanding.

Despite academic experience being their only exposure to IR 4.0, every group of respondents ranked academic training as not being applicable to the workplace among the top three challenges faced by graduates (58% of students, 48% of graduates, 53% of parents).

In spite their access to technological resources, only 11.6% had leveraged additional courses on top of their existing academic programmes to develop their long term competitiveness. Top reasons against pursuing additional certifications include time constraints and a lack of value.

The bright side is – with students today predominantly from Generation Z, more than a third have already gained some experience in included IoT (47%), Cloud Computing (38%) and AI (34%).

Other key findings from the survey include: 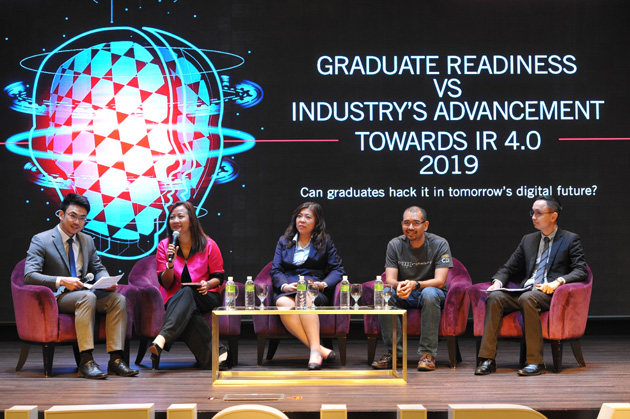 Reaching into the heartlands, it will travel around the city to offer mobile career matching services...

Case study: How Amcor got 53,000 unique hits on its recruitment web page

The most active hirers in Singapore in H2 of 2015

Be it the banking and financial services sector, or finance and accounting, medium-sized firms are set for aggressive hiring...

The benefits of hiring a job-hopper

Job hopping conjures ideas of fickleness and non-commitment yet it's more common than ever, do the pros outweigh the cons?..

Senior HR directors are likely to earn up to $300,000, while regional C&B managers remain the hottest HR professionals this year. ..