Hiring outlook across seven sectors in Singapore for Q1 2019

In the first quarter of 2019, a slight decline in hiring pace is expected. This comes after three consecutive quarters of strengthening labour market activity over the past year.

According to the latest ManpowerGroup Employment Outlook Survey, 10% of 645 employers polled intend to hire, 1% forecast a decrease, while the bulk (86%) predict no change. After accounting for seasonal variation, the overall net employment outlook came in at +10% — a 3 percentage point (pp) decline from the previous quarter, but remaining unchanged from a year ago.

Linda Teo, country manager of ManpowerGroup Singapore, said: "Employers in Singapore are currently cautious in their business outlook due to escalating trade tensions between the United States and China. Most employers are opting to maintain their workforce numbers in the upcoming quarter while they observe developments in the situation."

Here are the forecasts (from strongest to weakest hiring outlook):

The strongest labor market in more than four years is expected in the next three months with employers reporting a seasonally adjusted outlook of +14%. This marks a 2pp improvement quarter-over-quarter and 8pp year-over-year.

A steady hiring pace can be expected in the first quarter of 2019. Employers report an outlook of +11%. However, hiring prospects are considerably weaker both quarter-over-quarter and year-over-year, declining by 19pp and 16pp, respectively. A fair hiring climate is forecast for the next three months with employers reporting an outlook of +10%. Hiring intentions declined by 2pp when compared with the previous quarter and are 4pp weaker in comparison with 1Q 2018.

With an outlook of +7%, employers anticipate a mild hiring climate in the January to March time frame. Compared to the previous quarter, hiring prospects declined by 6pp and are 18pp weaker compared to the first quarter of 2018. Modest hiring opportunities are expected in the coming quarter. Employers are reporting an outlook of +7% - 4pp weaker compared to Q4 2018, but a 2pp improvement compared to a year ago.

Employers forecast modest hiring activity in the upcoming quarter, reporting a seasonally adjusted outlook of +5%. However, hiring plans are 4pp weaker when compared with the previous quarter, and declined by 5pp in comparison with 1Q 2018.

Among the seven sectors, transportation and utilities has the weakest labour market in the January to March period. This is also anticipated to be its weakest in more than five years. Employers report a net employment outlook of +3%. While it remains reletavely stable quarter-over-quarter, a 3pp decline can be seen as compared to Q1 2018. 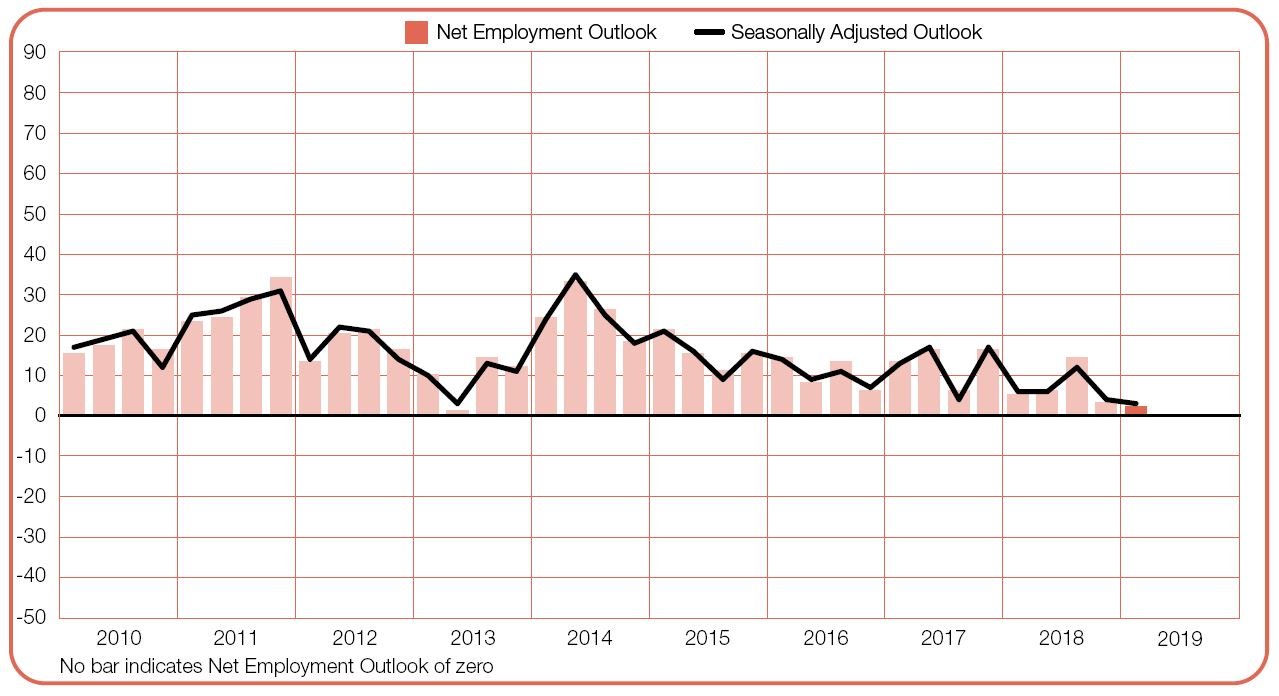 Teo commented: "Despite being uncertain about business prospects in the new year, most employers expect to add more digital talents to their workforce to develop their digital infrastructure and capabilities. IT professionals and digital talents specialized in the digitization of manual processes will continue to be in demand in the first quarter."

Across Asia Pacific, employers across all eight countries and territories expect to grow payrolls in the upcoming quarter.

Japanese employers report the strongest outlook in the region, while the weakest hiring intentions in the region are reported in China and Singapore.

In a comparison with the final quarter of 2018, hiring intentions improve in four countries and territories, but weaken in two: