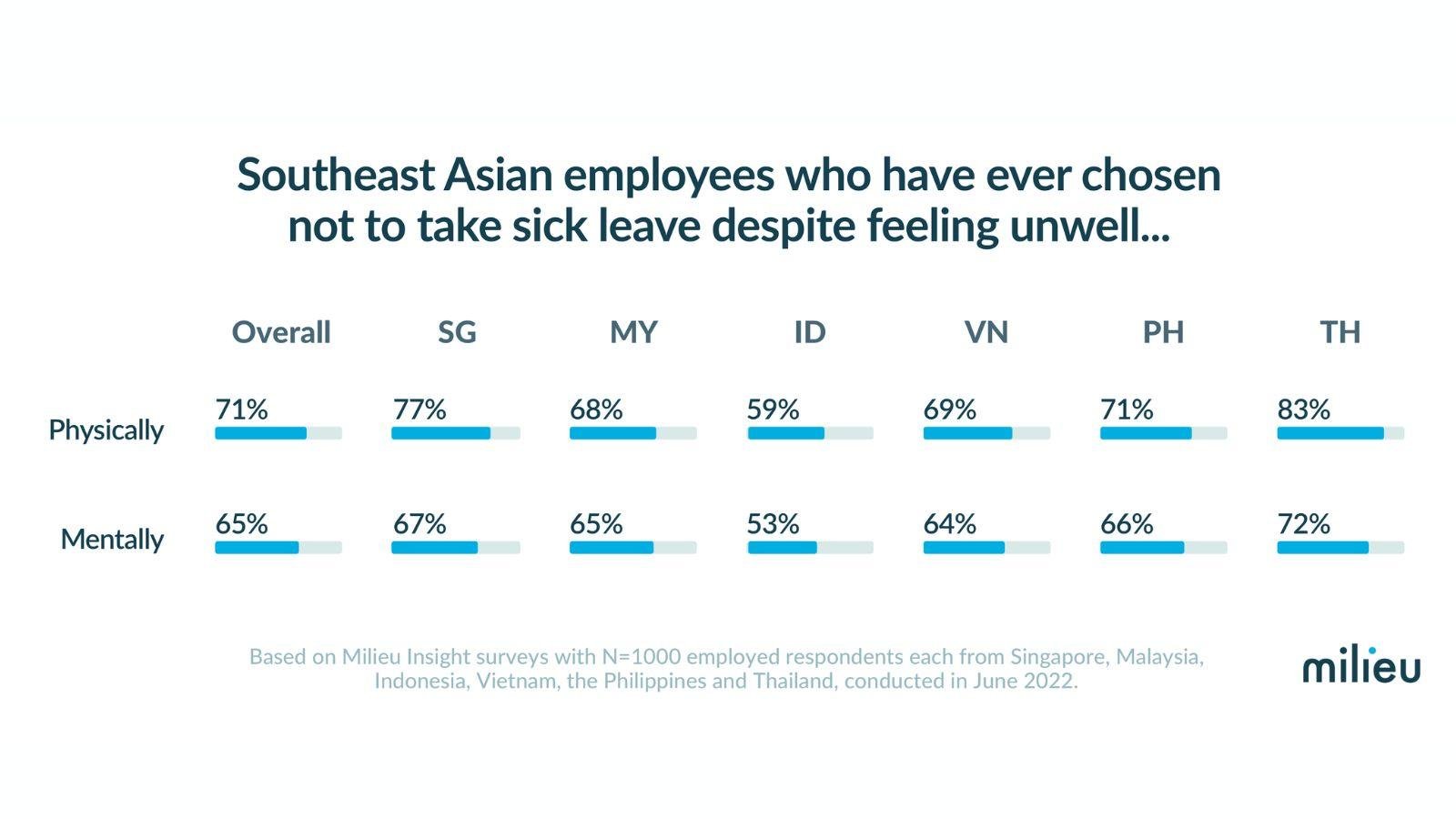 Mainly, this is because they feel there is "too much work to do", or that they "feel bad about missing work" and are "worried about missing out on important decisions/opportunities".

According to research & analytics company Milieu Insight's study – which involved 6,000 employees across Singapore, Malaysia, Thailand, Indonesia, Vietnam, and the Philippines – the long answer is: more than seven in 10 (71%) employees have chosen not to do so despite being physically unwell, and more than six in 10 (65%) chose not to when mentally unwell.

This is because "some may be hesitant to be absent from work despite falling ill over a combination of reasons such as presenteeism culture and high job demands", it was explained in the report. Others justified their behaviours with "too much work to do" (51%), "felt bad about missing work" (36%), and "worried about missing out on important decisions/opportunities" (31%).

Breaking the figures down by respective markets, the data is as follows:

In Indonesia, for instance, more than half of the employees mentioned they do not take sick leaves when physically (59%) and mentally (53%) unwell. This sentiment is relatively the lowest (i.e., employees do take sick leaves when necessary) as compared to all the Southeast Asian markets. Thailand, on the other hand, represented the highest of such sentiments.

Appraising employees with the number of sick leave taken

Unfortunately, these statistics are unsurprising, considering how close to half (48%) of employees surveyed said that their companies have the practice of considering the number of sick leave taken for an employee’s performance appraisal. Coupled with that, close to six in 10 (56%) employees across Southeast Asia condone (i.e. yes) such a culture. Slightly more than four in 10 (44%), on the other hand, beg to differ.

Dissecting the findings into the respective markets, those working in Indonesia represented the highest of such a culture (67%). It is followed by employees in Vietnam (62%), and in Malaysia (61%). Singapore registered the lowest of such at 34%, while those in Thailand are fairly evenly split into two camps (51% yes, 49% no).

When to report back to work?

Employees in these markets were also surveyed to understand when they need to return to work after falling sick. And, based on the results, the most common response was when they are "almost recovered, but still a little unwell" (48%). Less than three in 10 (27%) said that they would do so when they are fully recovered.

This is, however, a contrasting behaviour as a good number (60%) stated that employees, in general, should only return to work "after they are fully recovered".