Among a number of new initiatives announced by Singapore’s National Trades Union Congress (NTUC), is that the Singapore Bank Officer’s Association (SBOA) will now allow everyone employed in the banking and financial services (BFS) industry, and related services, in Singapore to join the union.

This measure helps both rank-and-file and Professionals, Managers and Executives (PMEs); while previously, SBOA’s constitution restricted membership to all administrative and managerial staff of the banks operating in Singapore only.

Additionally, the union leaders have voted for a name change – from the Singapore Bank Officer’s Association (SBOA) to the Banking and Financial Services Union (BFSU) to reflect their renewed mission to stay relevant and strengthen outreach to PMEs in the BFS industry.

As such, the union will be organising more roadshows, quarterly expert series with industry partners and networking sessions, with the intent to double its current 6,200 membership over the next four years. In the long run, BFSU hope to improve the wages, welfare and work prospects of sector professionals.

The changes were shared by NTUC Secretary-General (SG) Ng Chee Meng during the union’s launch event on 11 January. 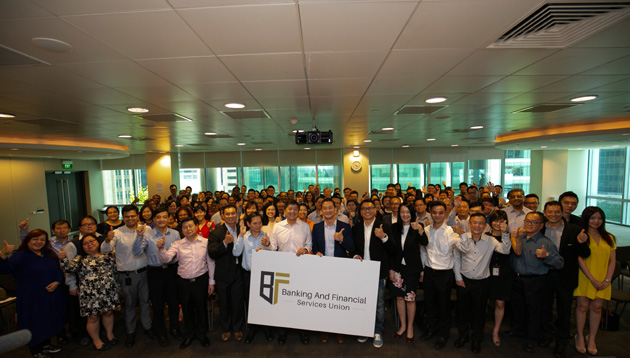 Patrick Tay, NTUC Assistant Secretary-General and Executive Secretary of BFSU said: “Just as we encourage workers to keep up with the times, unions must stay relevant as well so that they can better represent more workers and help them navigate the changing work environment.

With the formation of Banking and Financial Services Union, we hope to bring more PMEs into the Labour Movement’s fold.”

Wee Soon Guan, General Secretary of BFSU, added, “We have turned a page in the history of SBOA, and together with our members, leaders and tripartite partners, we will write a new chapter together.”

SG Ng Chee Meng also announced a new affiliation by the Singapore FinTech Association (SFA) to NTUC, making it the first NTUC U Associate partner to be affiliated to NTUC.

Since SFA’s partnership with NTUC started with the launch of the FinTech Talent Programme in October 2017, 130 participants have been trained over five runs to equip them with the latest fintech trends and technical know-how. With this new affiliation, NTUC would now have four affiliated associations, as well as 59 affiliated unions.

In conjunction with the affiliation, SFA will launching its individual membership scheme for the fintech community, providing members benefits like NTUC FairPrice rebates, NTUC Link Card, access to NTUC Club facilities, and more.

Chia Hock Lai, President of SFA, said, “Moving forward, fintech workers will now have a strong and comprehensive institutional support to ensure that they can thrive in the new economy by being a part of the unique and successful labour movement.”

Under the the Memorandum of Understanding (MOU) signed between BFSU and SFA, both associations will provide their expertise to help professionals upgrade their skill sets as the industry, as well as provide more platforms for PMEs to build their network. Members under the BFSU-SFA chapter programme will receive discounts to seminars and training courses as well.

Jacqueline Loh, Deputy MD of Monetary Authority of Singapore (MAS) and co-chairperson of the Financial Sector Tripartite Committee said, “We congratulate BFSU on its launch today, and look forward to partnering the labour movement and industry associations such as the SFA in supporting individuals to acquire relevant skills and build competencies for the future”.

Wong Keng Fye, Head Human Capital of Maybank Singapore, a BSFU management partner, commented: “As a long-time partner of the SBOA, Maybank shares the same philosophy of valuing and continuously developing Singapore’s human capital. This is a forward-looking step by them to proactively become even more inclusive and relevant to the workforce of tomorrow.”

IR 4.0: How HR can help define the new reality at work

For one, it improves the level of satisfaction, trust and retention among employees...

Companies in Hong Kong are the least likely in Asia Pacific to provide any health and wellbeing activities for their employees...

Read: Microsoft’s email to attract “bae interns” for “getting lit”

Did someone say "hella noms", "lots of dranks", and "getting lit on a Monday night"? Well, this tech giant's recruiting team did...

What good is the annual business planning trip if no one has the time to go? Here's how to get teams to look forward to such event..

Signs of a truly toxic workplace

What creates a poisonous working atmosphere isn't always as obvious as an openly dissatisfied employee or a bad boss. ..