Best and worst destinations for expats in 2017

In the latest Expat Insider 2017 study by InterNations, Singapore was ranked one of the top 10 destinations for expats this year. Other than that, some of the top scorers include Bahrain, Costa Rica, Mexico, Taiwan, Portugal, New Zealand, Malta, Colombia, and Spain for their quality of life.  Hong Kong is in the middle of the pack at 29.

Meanwhile, the study also revealed that the Czech Republic is the new best destination for working abroad – largely due to improved satisfaction with job security. 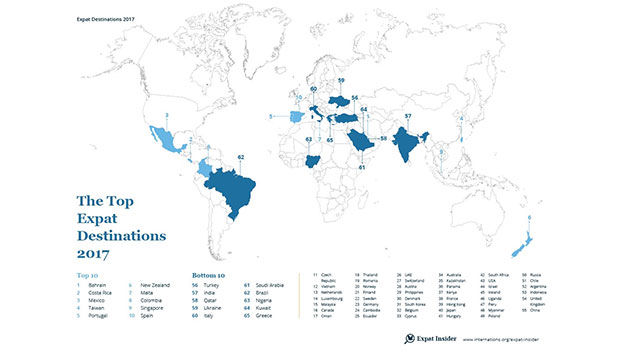 On the other end, Greece, Kuwait, and Nigeria remain the worst expat destinations due to a lack of career prospects, personal dissatisfaction, and worries about safety and security. Additionally, Panama (30th), Austria (19th), and Australia (32nd) have suffered great losses; and are no longer ranking among the top 10 destinations for working abroad.

For its annual study, InterNations had asked about 13,000 expatriates representing 166 nationalities and living in 188 countries or territories to provide information on various aspects of expat life, as well as their gender, age, and nationality. Participants were asked to rate 43 different aspects of life abroad on a scale of one to seven.

Snapshot: Why talent mapping is high on the agenda of Yeo’s CHRO Angelina Chua

In this interview, she affirms: "Given that good strategies require good people to execute them, we see talent curation as one of ..

The opening of the counter in the would make it easier for the local community to report various complaints and to seek employment..

NWS Holdings shares how the HR team manages its talents. ..

After knowing that his staff couldn't even finance a funeral, Addam Smith also decided to raise £100k. How's that for a great boss..

The store employs 10 deaf partners (employees), including a shift manager, among the coffee company's diversity initiatives...