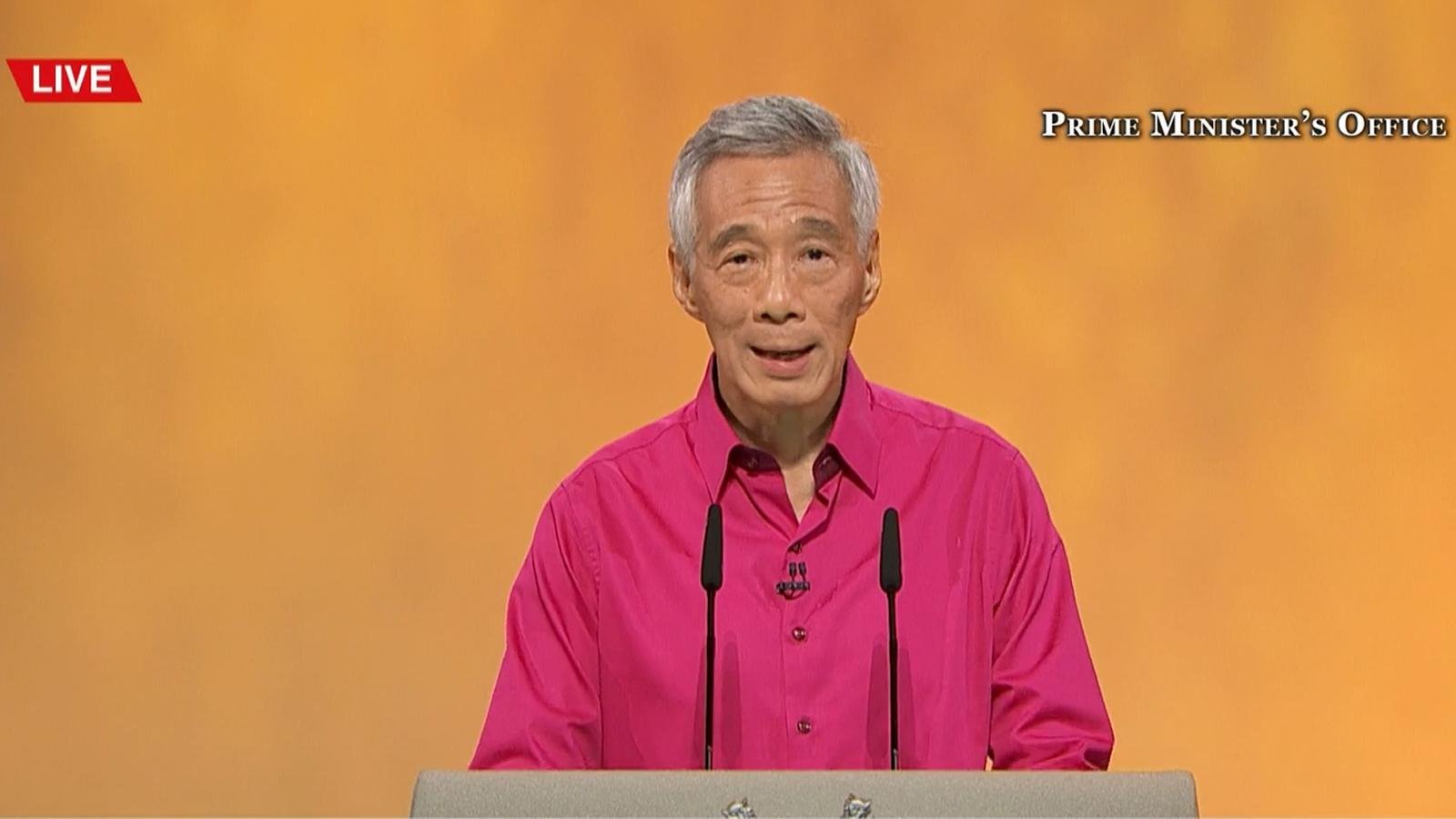 More support will be provided to local workers (in the form of qualifying salary of S$1,400 in instances of needing to hire foreigners); laws will be imposed to protect racial harmony; and starting November 2021, Muslim women in the healthcare sector can wear the tudung at work.

On Saturday (29 August 2021), Singapore's Prime Minister Lee Hsien Loong delivered his National Day Rally speech. In it, he touched on issues like the nation’s vaccination rate (in which eight in 10 residents are fully vaccinated), economic prospects, and equally importantly, social challenges.

We've put together three key takeaways that would be relevant to business and HR leaders: supporting lower-wage workers (LWWs); addressing anxieties over foreign work pass holders, and managing race and religion. Read on to find each takeaway in detail.

LWWs and their families, PM Lee said, already receive significant support from the government. This comes in the form of HDB subsidies, hospital subsidies, and CPF top ups, to name a couple.

“Despite this, LWWs are more stressed than others.

“Their jobs are less secure. They are more likely to be laid off. They have less savings to tide over hard times. In the pandemic, their situation has been precarious. That is why in every COVID-19 Budget Package we included extra help to lower income households,” PM Lee added.

As such, PM Lee cited the following longer-term support for not just LWWs, but across the employment landscape:

With this scheme, LWWs’ income isn’t taxed (effectively a "negative income tax"). Instead, the government tops up their salaries in cash and CPF contributions—which benefitted half a million workers and cost the government S$850mn a year.

“In two years’ time, we will increase this to S$1.1bn. This allows us to raise payouts for all workfare recipients and to help younger LWWs, by starting workfare younger, from age 30 rather than 35,” PM Lee said.

“We will cover more sectors, starting with retail next year, and later food services and waste management.

“We will also cover specific occupations, across all sectors simultaneously, starting with administrative assistants and drivers. In other words, at some point, sector by sector, horizontal. Slicing vertically, across all sector at once,” the Prime Minister explained.

Companies already have to pay a Local Qualifying Salary (S$1,400) to some of their local employees, depending on the number of work permits or S-passes they require.

This will, however, be tightened to require companies to pay all their local employees this Local Qualifying Salary if they wish to hire any foreign employees, and this salary “will also be adjusted from time to time.”

NTUC Secretary-General Ng Chee Meng, shared his thoughts on the initiative to uplift lower-wage workers, saying that the use of the Local Qualifying Salary to raise workers’ wages is significant and it will allow the nation to uplift the wages of more workers.

He added: "Through the PWM and various Government support measures such as the Workfare Income Supplement Scheme, we want to ensure that the support for our lower-wage workers takes a longer term view by continuously advancing their base wages, in tandem with productivity growth, so that their salaries will not stagnate."

The mark, PM Lee explained, serves to accredit companies that are paying all their workers with progressive wages. At the same time, it will tell consumers which companies are paying all their workers decent wages. “The public sector is a major buyer of goods and services. It will take the lead, and purchase only from such businesses,” PM Lee said.

Talking about delivery workers with online platforms, like Food Panda, Grab or Deliveroo, PM Lee said: "Delivery workers, are for all intents and purposes, just like employees. The online platforms set the price of their product. They determine which jobs are assigned to which workers. They manage how the workers perform, including imposing penalties and suspensions."

He cited his concern that despite this, delivery workers have no employment contracts with the online platforms, thus lacking basic job protection that most employees enjoy, like workplace injury compensation, union representation and employer CPF. "More people are taking up this type of work, so this problem is growing. MOM is studying it and will be doing consultations. We must address the issues to give these workers more secure futures."

Adding to this topic is Minister for Manpower Dr Tan See Leng. On Facebook, he shared there will be an Advisory Committee to look into strengthening protections and ensuring a more balanced relationship between platforms and platform workers. “The committee will begin their work soon and consult widely,” he added.

Minister Tan also shared that the government is reviewing its employment framework to uphold workplace fairness, through the Tripartite Committee on Workplace Fairness, and expand the range of possible actions, including legislating the current fair employment guidelines.

“We will aim to first resolve workplace disputes amicably, and use the legal channel only as a last resort. We will develop an approach that is in the best interests of workers and businesses, as well as for Singapore,” the Minister said.

On this announcement, NTUC Secretary-General Ng Chee Meng, said: "I am heartened that the Government has taken in NTUC’s suggestions to strengthen workplace fairness and accord more power to TAFEP in dealing with workplace discrimination. This will expand the range of actions TAFEP can take to protect workers."

PM Lee said: “LWWs are not the only ones feeling job anxiety. Middle income Singaporeans are also feeling the pressure.”

This sentiment is more often than not due to competition for jobs and opportunities at the workplace between locals and foreign work pass holders, which was intensified by Singapore’s economic uncertainty.

On that note, the Prime Minister highlighted that over time, the criteria to hire EP and S pass holders will be further tightened for employers.

“Not suddenly or sharply, which would hurt businesses, but gradually and progressively. This will ensure that work pass holders come in where we most need them. And we won’t be flooded with more than we can absorb, doing jobs for which Singaporeans are qualified and available,” PM Lee explained.

For the meantime, he pointed to how the qualifying salaries are always being raised - twice in the last year, and for the financial sector, where salaries are higher, a higher cut-off has been set.

The next item PM Lee highlighted was ensuring all employees receive fair treatment at the workplace. This stems from complaints often heard about financial institutions and IT companies hiring too many foreigners, given both have a large share of work pass holders.

PM Lee shared the rationale for more work pass holders in such sectors:

Even so, these companies have also recruited many Singaporeans, and groomed the promising ones to take on senior and international positions not just in Singapore, but all over the region. "Had we not allowed them to import the EPs they needed, the companies would not have come here, and Singaporeans would have had fewer opportunities," he added.

Having said that, not every company plays ball. He explained: "A few have not been fair employers. They hire from their own countries, using familiar links and old boys’ networks, rather than on merit. And they give foreigners the jobs and opportunities, and only make token gestures with locals. That naturally causes problems."

As such, he reminded employers about the services of the Tripartite Alliance for Fair & Progressive Employment Practices (TAFEP) which has laid out clear guidelines on fair treatment. If a company falls short in terms of meeting the guidelines, TAFEP will counsel it. “And if it still fails to get its act together, MOM can impose administrative penalties, including restricting it from hiring foreign workers,” PM Lee added.

Going forward, PM Lee noted that the TAFEP guidelines will be enshrined in law, thus giving them more more teeth and expand the range of actions they can take.

As such, a Tribunal will be created to to deal with workplace discrimination, with the objective to:

He added: "Philosophically, writing TAFEP guidelines into the law is a major move. It signals that we do not tolerate discrimination at workplaces. But in practice, we hope to operate in a similar way as today, except better. We should still resolve workplace disputes informally and amicably, if at all possible."

ALSO READ: The challenges mature PMEs are facing in Singapore and what's being done about it

“During COVID-19, race relations have come under stress. There have been more racist incidents, several of which were widely publicised on social media,” the Prime Minister said.

This is despite Singapore having laws— like the Penal Code and the Sedition Act—dealing with serious racial offences, like hate crime or causing racial enmity.

To enhance those laws, PM Lee shared the government intends to pass a specific legislation on racial harmony called the Maintenance of Racial Harmony Act.

“It will collect together in one place all the Government’s powers to deal with racial issues. It will also incorporate some softer, gentler touches. For example, the power to order someone who has caused offence to stop doing it, and to make amends by learning more about the other race and mending ties with them.

“This softer approach will heal hurt, instead of leaving resentment and if he complies and does it, that is good and we will move on. If he does not comply or continues to do wrong things, of course legal consequences follow,” he explained.

Along the topic of race and religion, the Prime Minister spoke of Muslim women wearing tudung both in social settings and workplaces. "However, in some places where uniforms are required, the government has not allowed the tudung to be worn. This particularly applies to school uniforms, to uniforms in the SAF and Home Team, and also to nurses’ uniforms in public hospitals."

Going forward, PM Lee announced that starting in November, Muslim nurses in the public healthcare sector will be allowed to wear a tudung with their uniforms, if they wish to.

Commenting on this topic is Singapore's Healthcare Services Employees’ Union (HSEU). On Facebook, the union posted: "By allowing nurses to decide if they wish to wear a tudung, we hope that this will help to lower the barriers for Muslim nurses who are keen to join the healthcare sector but have been holding back due to the current guideline on this."

HSEU, however, clarified that should nurses choose to wear a tudung while at work, they should do so without compromising on the way they conduct their work and more importantly, uphold infection control protocols as well as prioritise the safety of themselves and those around them.

“Should there be situations where it may get in the way, we hope that nurses will practice professional vigilance and put the needs of patients first,” the union added.