Salary claims made up 86% of Singapore's employment claims in 2019 and H1 2020, but overall numbers remained low 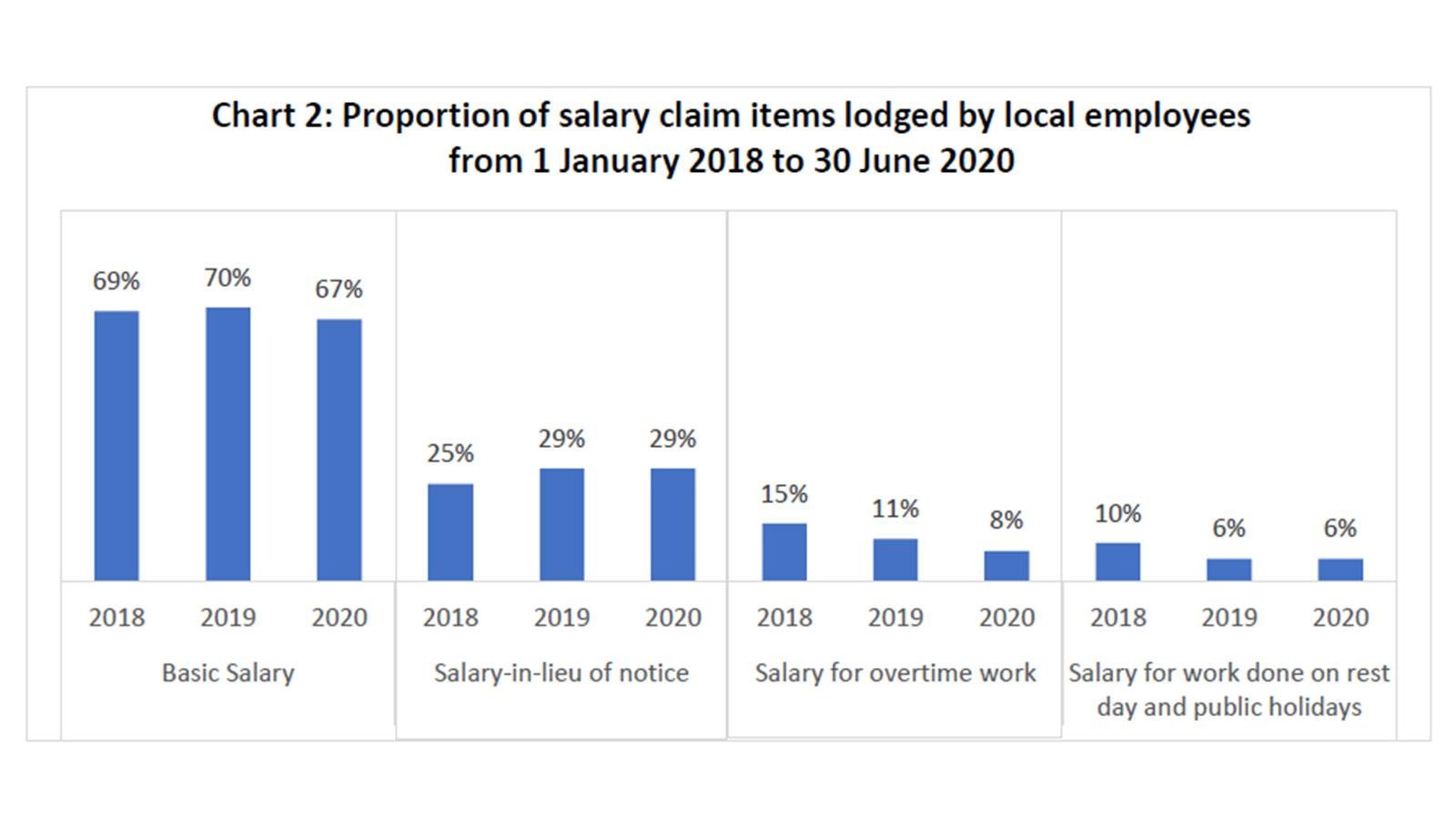 As for H1 2020, the annualised salary claims recorded per 1,000 employees stood at 1.73, higher than both 2019 and 2018, mainly due to the economic disruptions of COVID-19. Per the report, about 40% of all salary claims lodged by local employees came from the services industries, which were severely impacted by the pandemic.

More salary claims were lodged by foreign employees in 2019, but this dropped in H1 2020

That said, a drop in annualised salary claims was observed in H1 2020, at 3.96 per 1,000 foreign employees, driven by a significant drop in the number of claims lodged by foreign employees in the construction sector.

A total of 1,506 dismissal claims were then lodged under the amended Employment Act and Child Development Co-Savings Act between 1 April 2019 and 30 June 2020, the report highlighted. Of the 1,431 lodged under Section 14 of the EA, 23% (333) were by managers and executives who were not previously covered by the Act.

At the same time, 2% (or 26) of claims under the EA are still pending mediation by TADM, while 286 (or 20%) were either privately settled or withdrawn.

Zooming into specific quarters, a "significant increase" in dismissal claims were recorded in Q2 2020, in tandem with the decline in local employment. Despite the increase, the report noted there was no evidence that more employers terminated their employees unfairly to deny them of retrenchment benefit. The absolute number of claims for retrenchment benefit remained low at 69 claims in Q2 2020.

Instead, many of the dismissal claims in that quarter were lodged by employees who were unhappy over the abrupt manner of termination (due in part to restrictions in face-to-face meetings during the Circuit Breaker), rather than failure to fulfil their contractual obligations.

In light of this, TADM has advised employers to take steps to prevent such avoidable unhappiness and disputes. "Employers should always be clear in their communications and be sensitive to the emotions of their employees when exercising contractual termination.

"In cases where workers were retrenched instead of contractually terminated, the updated Tripartite Advisory on Managing Excess Manpower and Responsible Retrenchment (with effect from 17 October 2020) specifically addresses this point, by calling on employers to ensure their retrenchments are carried out in a respectful manner, and with compassion, including the manner in which the affected employees are notified and the type of support they receive thereafter."

72% of dismissal claims were concluded within two months

Of the dismissal claims lodged between 1 April 2019 and 30 June 2020, 72% were concluded within two months, with the complex claims concluding between two and six months, and the total payment by employers to employees amounted to S$1.4mn.

More than 7,300 workplace inspections were carried out between January 2019 and June 2020

Between January 2019 and June 2020, MOM carried out more than 7,300 proactive inspections of workplaces to ensure some 52,400 employees received their employment dues, such as prompt payment of salary and payment for overtime, work done on rest days and public holidays at the correct rate of pay.

To help employers who did not "wilfully" breach employment laws and were non-compliant largely because they overlooked the requirement to keep proper work hour records, especially with respect to the calculation and payment for overtime work, MOM required them to attend corrective clinics on the EA to better understand their obligations and improve their employment practices.

A total of around 600 employers attended these clinics in this period, with more than nine in 10 subsequently rectifying their practices. The remaining employers were required to correct their practices, and enforcement action was taken according to the severity of the claim.

Over 1,200 employers have been scrutinised for fair hiring since 2016, with 3,200 EP applications rejected/withheld

Since 2016, more than 1,200 employers have been scrutinised under the Fair Consideration Framework, according to a separate feature in the report. In all, 3,200 Employment Pass (EP) applications by these employers have been rejected or withheld by MOM, or withdrawn subsequently. On the other hand, employers on the FCF Watchlist have hired more than 4,800 Singaporean PMETs.

Apart from that, in H1 2020, TAFEP looked into about 260 cases of possible discriminatory hiring practices, up from about 160 for the same period in 2019. Substantiated cases were referred to MOM for investigations and enforcement. Within that period, MOM had curtailed the work pass privileges of about 70 employers for discriminatory hiring practices, a significant increase from 35 employers in the full year of 2019.

Commenting on these findings, Patrick Tay, Assistant Secretary-General of NTUC, said in a Facebook post: "The issue of discriminatory hiring continues to be something we must constantly pay close watch to. On top of existing penalties, the Government could also rescind preferential tax benefits from companies that continue unfair recruitment practices and disallow them from winning public sector contracts or publish the names of recalcitrant firms that repeatedly fail to show concerted efforts to strengthen the Singaporean Core."