How Thailand and Indonesia rank for women in fintech

As technology-led disruption continues and the financial industry seeks ways to keep up, fintech (financial technology) has become a fast-growing industry worldwide.

That said, it is still traditionally male-dominated — 86% of fintech companies in ASEAN have all-male founders, as cited in a recent study by ValueChampion.

In line with that, the study analysed various data resources to rank and determine the APAC countries that best provided for women who sought advancements in the field.

Out of the 12 major countries studied, Australia ranked first, followed by Singapore in second place. Malaysia came in fourth, while Thailand and Indonesia ranked seventh and eighth respectively.

Overall, the best APAC countries for women in fintech are:

Based on the analysis, although Singapore had the strongest fintech market in APAC and is also ranked the best for women’s safety, its high living expenses (ranking: eighth) and gender gap (ranking: fourth) brought the country to second place.

At the same time, Australia took the top spot by ranking best for both quality of life and living expenses, and amongst the top two to three for the other factors.

On the other hand, Thailand ranked the lowest (12th) for living expenses, and ninth for both women’s safety and fintech salary. Indonesia had similar trends, ranking low for women’s safety (eighth), the third lowest for quality of life (10th), and coming in second last for its business climate (11th).

Lastly, Malaysia fared in between, with its lowest rank being for the gender gap (eighth) and its highest rank for living expenses (third).

View the full country ranking below: 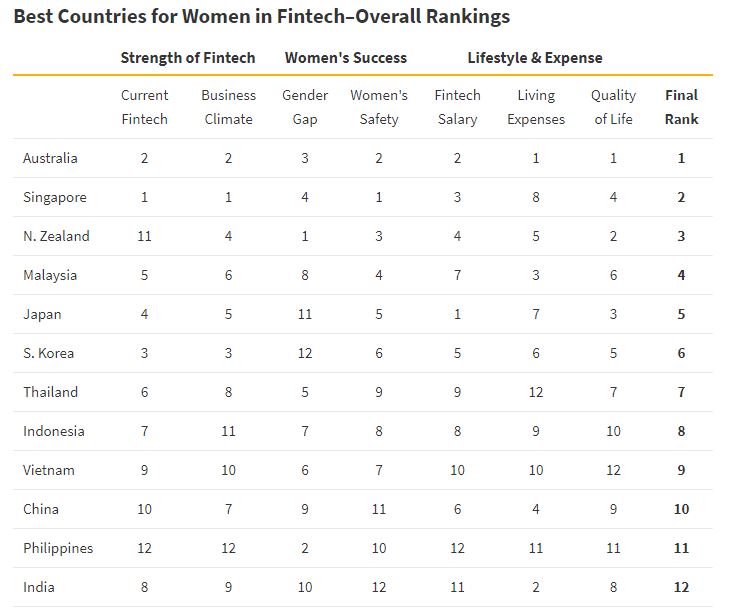 How were these rankings determined?

To determine the rankings, the study analysed each country based on three main categories:

With these factors combined, the overall top countries were found to have both strong fintech markets as well as “hospitable conditions” for women in the profession.

All updates from this annual conference on creating a competitive and cost-effective C&B strategy in a changing labour market. ..

With a drop of USD$17,188 compared to the average expatriate pay package, this kept Malaysia rooted to the bottom 40-country list...

The four drivers who instigated November’s SMRT strike have pleaded guilty and been sentenced to up to seven weeks in prison. ..

Communicating regularly, being transparent and honest, and gathering feedback are the three most time-tested ways that chief execu..