How confident are Millennials and Gen Zs in their employers' response to the pandemic? 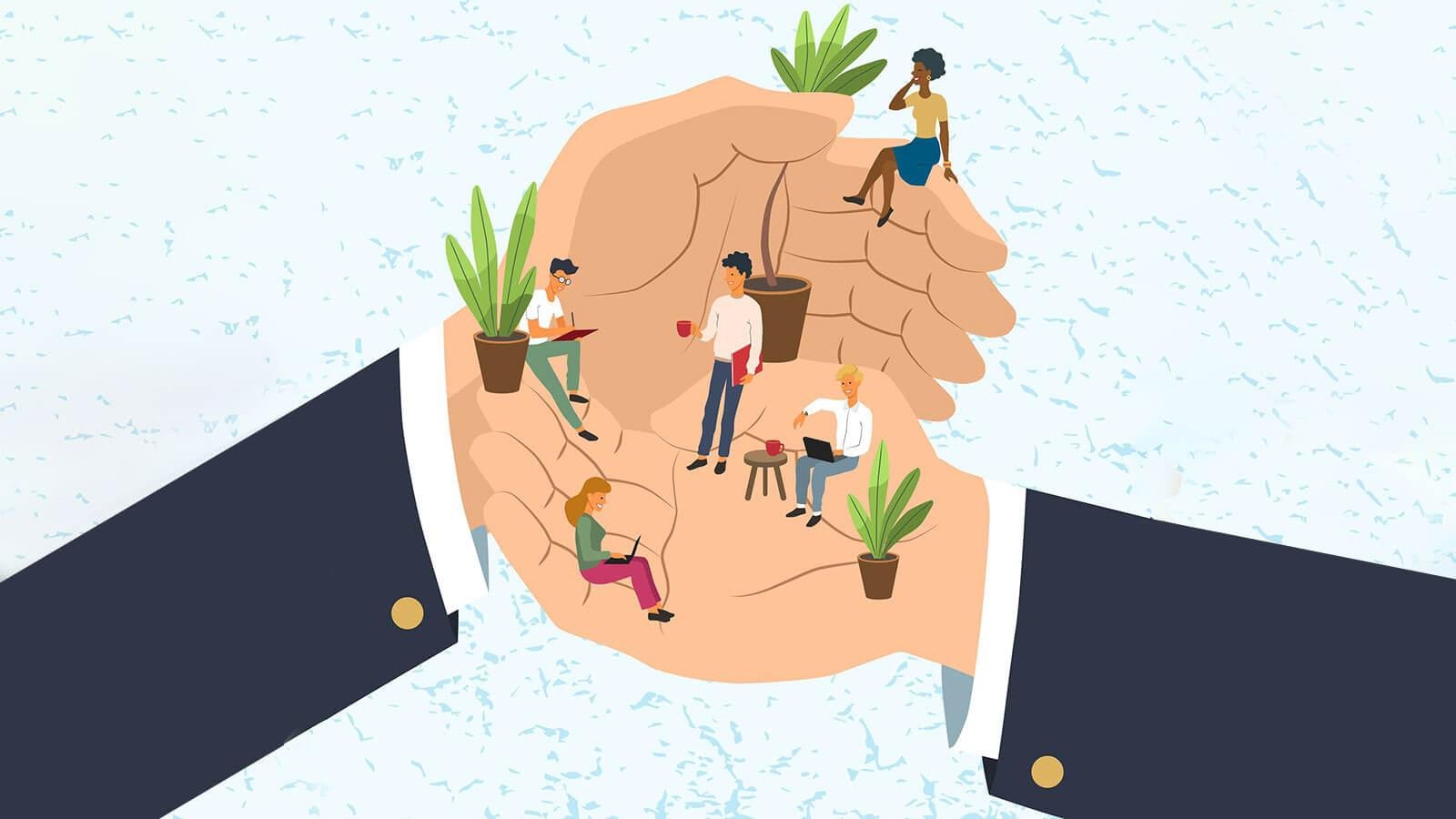 In times of crisis - such as the current COVID-19 pandemic - how governments respond is one thing, but how the employer responds is also critical in building up employee confidence.

In fact, in the recent 2020 Deloitte Global Millennial Survey, a number of Millennials and Gen Zs surveyed around the world found themselves more loyal to their employers based on how they handled the ongoing pandemic.

For instance, of the 9,102 individuals surveyed across 13 countries between April and May this year, two-thirds said they were pleased with the speed and manner in which their employers had acted; at the same time, about six in 10 (60%) believed these actions made them want to stay with their employers for the long term. 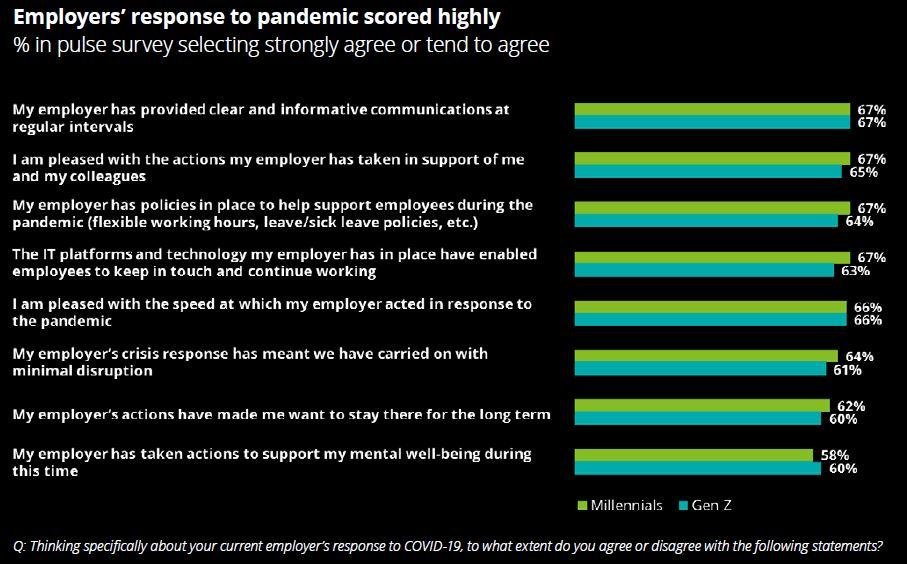 Zooming in on mental health - when both demographics in these 13 countries were surveyed prior to the pandemic, 50% of Millennials and 52% of Gen Zs indicated they were stressed all or most of the time. Primary reasons cited included family welfare, long-term finances, and job prospects.

Following that, stress levels had fallen by the second survey, possibly due to a slowdown in life during lockdowns, the report noted. In particular, 42% of Millennials now say they are stressed all or most of the time, while 44% of Gen Zs say so.

That said, the primary sources of stress remain the same, job/career prospects seen as the biggest, among 46% of Gen Zs and 40% of Millennials (3 points more than pre-pandemic). The second-highest primary source of stress was the longer-term financial future (Gen Zs: 43%, Millennials: 41%), followed by family welfare as the third (41% for both groups). 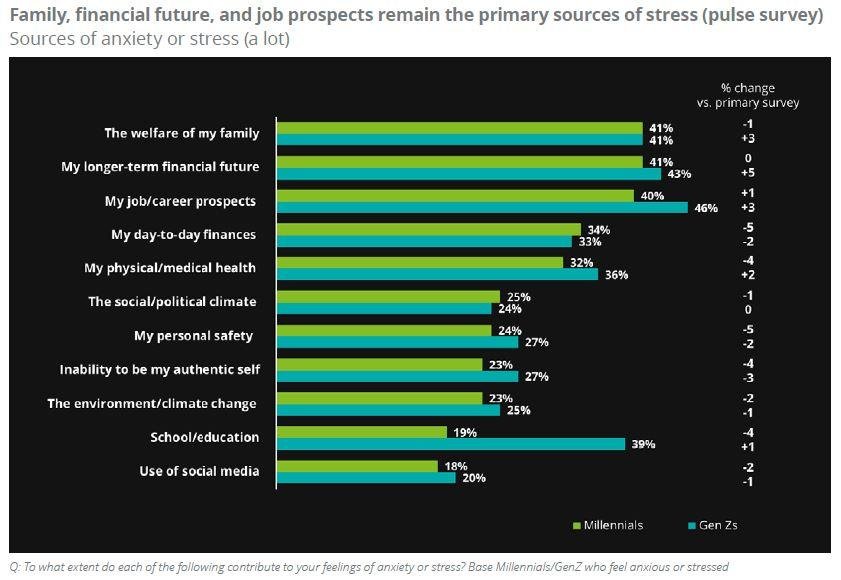 Employers are addressing their employees' wants

According to the report, for the first time since 2016 (per Deloitte's survey), more Millennials in the pre-pandemic survey said they wanted to stay with their employers for five or more years than leave within two years.

Those who would leave in two years or less dropped from 49% to 31%, while those who’d prefer to stay long-term jumped from 28% to 35%. Gen Zs remain more interested in moving, but only half said they’d like to change jobs within two years, down from 61% last year.

To that point, respondents in the primary survey acknowledged that employers are making headway in addressing the values of younger generations. For instance, Millennials who feel their employers are creating diverse and inclusive work environments inched up three percentage points (pp) from last year, to 71%.

At the same time, “having a positive impact on communities” improved (65% to 69%), while 61% said that “reducing its impact on the environment” is one of the things their companies are doing well. Notably, this number was 22pp higher among those who intended to stay in their jobs five or more years than those looking to leave fairly soon. 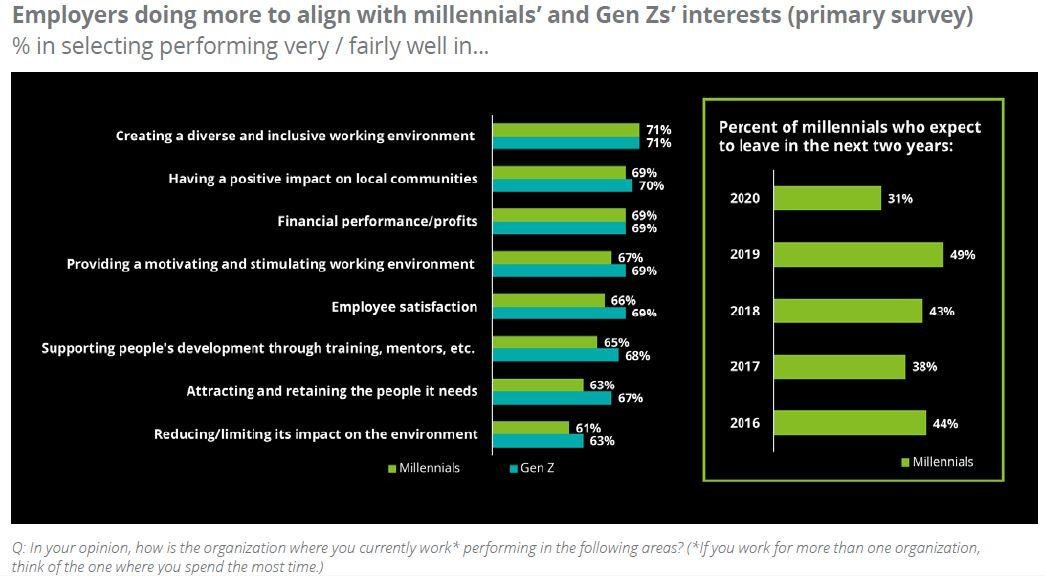