APAC employees’ attitudes towards the current world of work 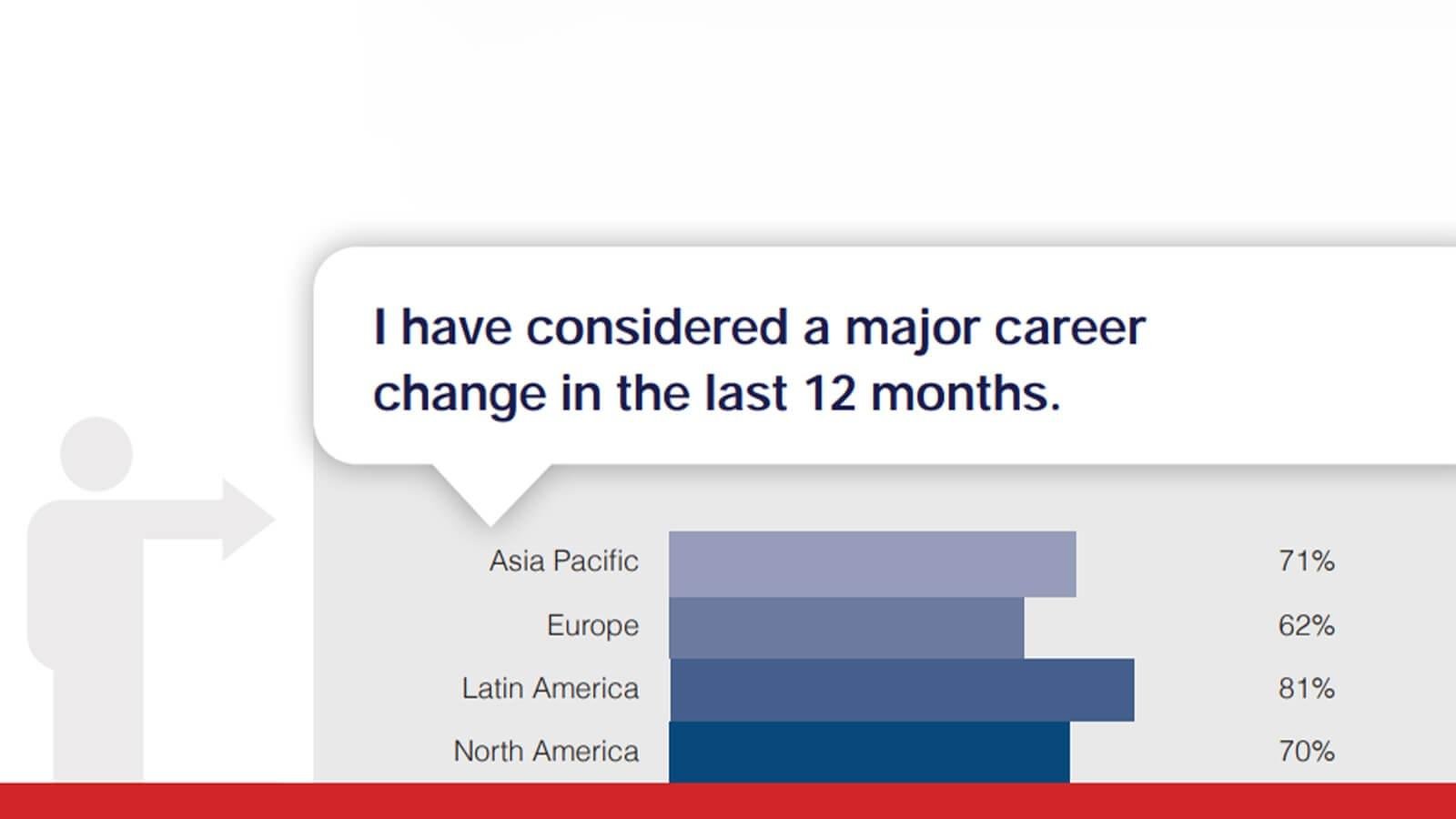 Younger workers in Singapore are considering relocation to bypass their career challenges, while workers in India and China are reporting satisfaction over mental wellness approaches.

Younger employees in Singapore have shown more interest in relocating, with 51% of those surveyed aged between 18–24, and 43% between the ages of 24–34, planning or considering relocation for their job.

In comparison, the average across demographics surveyed showed that only three in 10 workers in Singapore plan to relocate to another country for work.

As a whole, ADP Research Institute’s People at Work 2022: A Global Workforce View report explores employees’ attitudes towards the current world of work and what they expect and hope for from the workplace of the future, with almost 33,000 workers in 17 countries surveyed. In Singapore, over 1,900 workers above the age of 18 were surveyed.

The findings suggest that younger workers in Singapore, who began their careers in the middle of a pandemic marked by disruptions, reduced opportunities, and uncertainty about their future, may consider relocation the gateway to greener pastures and a fresh start for their careers. In comparison, older workers with established careers and families are less likely to want major changes in their lives.

Commenting on the findings, Yvonne Teo, Vice President of Human Resources, Asia Pacific, ADP, added: “The finding that over five in 10 Gen Z workers have plans to relocate may be surprising at first, but it is worth noting that these employees began their careers during the pandemic and saw reduced opportunities and disruptions. This is in addition to those who might already be looking for overseas opportunities—with or without the pandemic—for their own exposure and life experience.

“Companies should consider how to retain talent by providing opportunities for growth and career advancement. For employees thinking of relocation, companies can consider exchange programmes in overseas offices, stretch assignments, and department rotation. This not only benefits the company from a retention standpoint, but also encourages new and different ideas from the cross-culture young talent posted overseas.

On a larger scale, 71% of respondents in Asia Pacific (APAC) indicated that they have considered a major career change in the last 12 months.

Particularly, respondents in India were the most likely of any country studied globally to have considered a major career change in the last 12 months. Going further, 88% have done so, compared to 75% in Singapore, 68% in Australia and 61% in China. This may be due, in part at least, to only one in eight (12%) workers in India and Singapore feeling that their job or industry is secure.

Across the globe, the most considered changes going through employees' minds seem to be changing industries and requesting a sabbatical from employers, with both receiving 24% of the votes.

The study also found that flexibility of hours is important to 43% of workers in Australia, 42% in Singapore, and 31% in India and China. Enjoyment of the day’s work is key for around two in five Chinese and Australian workers (39% and 38%) and a third in Singapore (32%), but only just over one in five in India (22%).

Drawing parallels between the Singapore vs the APAC & global findings, in light of the labour crunch all around, the survey suggests that it is paramount for companies to consider how to best engage and retain their young employees to combat a potential brain drain — so what can employers take note of?

These days, what’s important in a job goes well beyond directly personal concerns: more and more workers weigh up broader ethical or cultural considerations when deciding whether to join or remain with an employer. For example, workers are signaling a willingness to walk away if employers fall short when it comes to creating a diverse workforce and treating them fairly. Diversity, equity and inclusion (DEI) is therefore fast becoming a make-or-break issue.

To illustrate this point, 76% of workers would consider looking for a new job if they discovered there was an unfair gender pay gap or no diversity and inclusion policy at their company. While women were more likely to say so, men were not far behind. This also particularly resonated with younger workers. It is a point of principle which has greatest resonance in Asia Pacific and Latin America, more so than in Europe or North America.

Workers in India and China in particular would consider leaving if they discovered there was an unfair gender pay gap at their company or no diversity and inclusion policy.

In reality, 59% of workers globally believe their employer has a gender pay equality policy and 57% are thought to have a diversity and inclusion policy, with the Asia Pacific region performing best on this front (64% and 61%). However, that still leaves around a third of employers (32% and 34% respectively) who either talk about the importance of such policies but don’t have one, or who never mention them at all.

Since pay inequity is more of a dealbreaker for younger workers, there is likely to be a permanent expectation among both current and future workers that employers take DEI seriously as part of their corporate culture.

Interestingly, while management teams, company owners and HR departments are cited as the primary drivers of gender pay equality and a diversity and inclusion policy within companies, in a third of cases (33%) it is left up to employees. One in seven (15%) say no-one is driving it: an answer that’s far more common in North America and Europe (22%) than in Latin America (11%) or Asia Pacific (13%)

In the region, more than one in five Australia respondents and Singapore respondents say that no one is driving gender pay equality and diversity and inclusion at their companies (22%), compared to around one in eight in India (12%) and in China (14%).

Despite recent turbulent times, 90% of respondents say they’re satisfied in their current employment. This upbeat assessment is most prevalent in Asia Pacific and North America (91% and 90% respectively). However, for a more nuanced insight, while half (49%) describe themselves as ‘very satisfied’, the rest are lukewarm, meaning that employers may need to think carefully about how to maintain positive sentiment.

For the one in 10 who are not satisfied with their current employment, almost half (49%) say it is due to being given increased responsibility for no extra pay, rising to 53% in Asia Pacific compared to 37% in Europe.

Job satisfaction is widespread, particularly in India, where more than nine in 10 workers say they’re satisfied in their current employment. In Singapore, however, the feeling is more muted. There, less than a third (31%) describe themselves as very satisfied; while just over half (52%) are ‘somewhat’ satisfied (compared to 61% and 31% in India respectively).

Looking ahead, half of the employees surveyed in Singapore (50%), expect to achieve a pay raise in their current company within the next 12 months. In close second, 45% expect a bonus.

Although salary is the number one priority in a job across the region, it is by far the most important factor for Singaporeans, 71% of whom put it top, followed by two thirds (66%) of Chinese workers. Despite this, workers in India were most likely to ask for a pay raise if they feel they deserve one (86%), compared to 78% of Chinese, 63% of Singaporean, and 61% of Australian workers.

While Indian workers may not have high expectations of being offered a pay raise, the study suggests that they may feel more inclined to ask for one because they have earned it by putting in more unpaid overtime. On average, workers in India indicated that they work 10. 3 hours per week for free (i.e. hours worked over lunch breaks, staying late). This was then followed by workers in Singapore, at 8.4 hours.

Globally, almost seven in 10 (67%) workers say they experience stress at work at least once a week, up from 62% pre-pandemic. Further, one in seven (15%) feel stressed every day. For those struggling with stress, the most common cause is having increased responsibility as a result of the pandemic (41% say so), which is also a major contributor to job dissatisfaction, as discussed above.

Particularly, mental health issues are putting the quality of work under strain in India and China, whereas it’s less of a problem in Australia and Singapore.

Perhaps in recognition of this, employers in India and China appear to be doing the most to help promote positive mental health at work, with only 4% and 11% workers respectively saying their employer is doing nothing proactive to promote it, against almost one in five (18%) in Australia and Singapore.

Stress is also prevalent. More than eight in 10 workers (81%) experience stress at least once a week in India, as do 74% in Singapore and 70% in Australia, falling to 56% in China.