94% of Singaporeans are stressed about losing their jobs COVID-19 has plunged the world into a global recession, resulting in mass unemployment – and Singapore is no exception.

With Singaporean unemployment rates at the highest it has been in more than a decade, even surpassing what was recorded in the SARS period, it's no surprise that these days, what keeps Singaporeans up at night is job insecurity - which refers to the fear of losing one's job.

According to a recent YouGov survey, an overwhelming majority of employed Singaporeans are also feeling stressed over losing their jobs and, in the unfortunate event that they do get laid off, about half believe it will be difficult to find another one of similar pay and benefits.

The survey, which polled 719 Singaporeans employed in full-time jobs, revealed how full-time Singaporeans are coping with job insecurity, and their attitudes towards unemployment, and re-employment.

It was found that high-income earners (with a monthly household income of S$8,000 or more) were the most likely to feel ‘very secure’ in their jobs (17%). 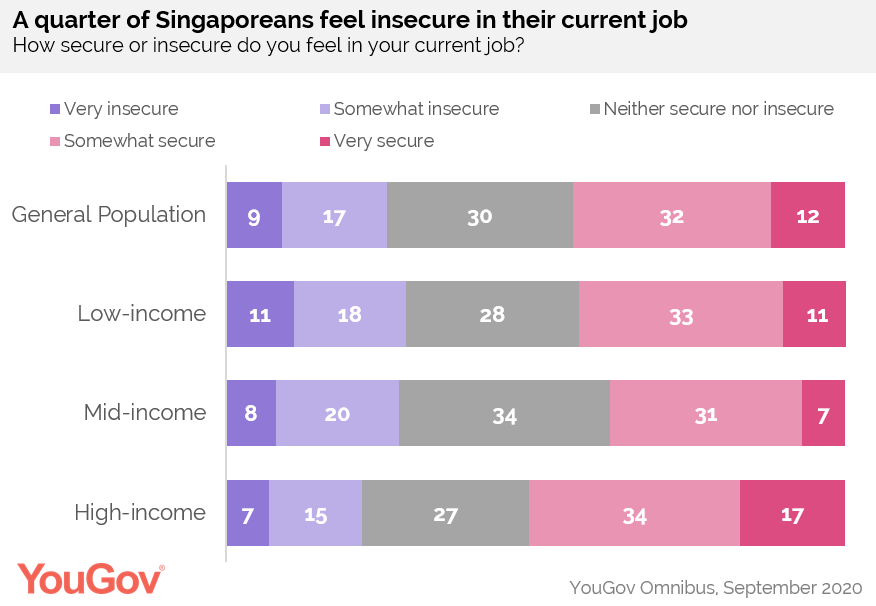 Unsurprisingly, those who are feeling ‘very insecure’ in their jobs were also the most likely to feel very stressed – with 74% saying so, as opposed to those who felt ‘very secure’ (17%).

Interestingly, high-income earners were twice as likely to say it would be easy to find a similar job, compared to low and mid-income earners (15% vs. 7%).

Perhaps unsurprisingly, low-income earners (with a monthly household income of less than SGD 4,000) were twice as unwilling to take a pay-cut than high-income earners (25% vs. 12%).