4 things employers must do to bridge the gender pay gap

This article is brought to you by Willis Towers Watson.

The gender pay gap has been a workplace reality for years. The World Economic Forum’s 2017 Global Gender Gap Report calculated that at the current rate of change it will take 217 years to close the global economic gap between genders. The issue hits close to home, with Willis Towers Watson research showing that women in Singapore earn about 25% less than men – most commonly in banking, financial services, and real estate sectors.

An industry expert passionate about resolving gender pay disparity is Shai Ganu, managing director, and rewards business leader – Asia Pacific, Willis Towers Watson. In his view, this is a societal issue as much as a business issue, given that on average globally, for every one dollar a man makes, a woman is paid 80 cents.

“However, I don’t believe this is the result of an intentional policy. Often, pay gaps reveal the symptoms – not the underlying causes. There are other factors involved,” he points out, in an exclusive interview with Human Resources.

One of the factors is the proverbial glass ceiling. “As we go up in seniority and experience, the proportion of women at higher levels reduces, especially at about the 10-year seniority mark. So even if progressive companies achieve ‘same pay for same job’, it doesn’t solve the problem,” says Ganu.

This stark reality was in evidence recently, with UK’s brand-new legislation coming into effect. It mandates that companies with 250 or more employees must annually report the median and mean percentage difference in hourly pay, which highlighted data on the gender pay gap as well as the lack of women at the top. 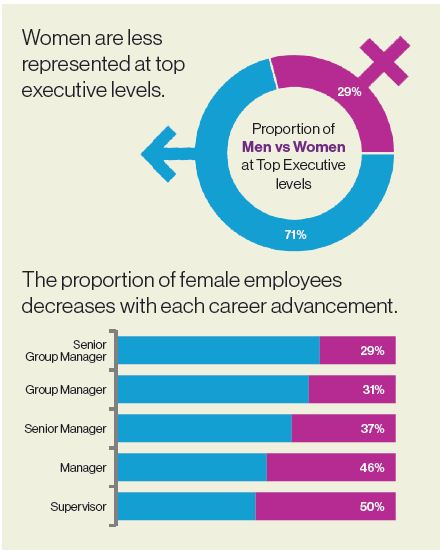 Another factor, especially pertinent for Singapore, is how women have traditionally shied away STEM-oriented jobs, i.e. jobs in science, technology, engineering, and mathematics. Ganu explains: “Their educational bias towards the humanities and arts has partly been led to the gap, as data has shown STEM jobs are higher paying than those in humanities or arts.”

However, this may change in the future. Willis Towers Watson’s research on the future of work suggests that a critical skill in the future will likely be ‘learning agility’ – which may well be aligned with humanities and arts, he adds.

And finally, there are the naysayers – those who argue there is no gender pay gap or that the gender pay gap is a myth. Ganu clarifies: “This is a set of people who are looking at limited statistics at a certain age group or certain level of an organisation, for example, pay parity for the same job grades. If they perceive that there are no gender pay issues based on that lens, then it may mask more systemic issues, for example, promotion rates between men and women.” 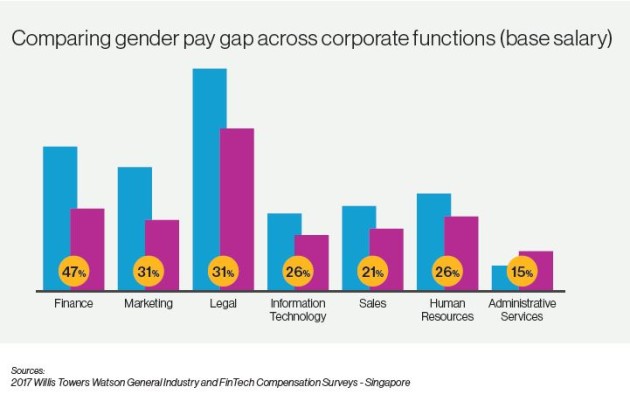 How to walk the talk

This begs the question, what can be done differently to bring back these women into the promotion cycle? On the state front is legislation, where for example, in some states in the US, a law has been passed where you are not allowed to ask any candidate their current salary, something that Willis Towers Watson is also implementing.

It is also important to look at talent management with a lens of diversity. This phenomenon is not only linked to promotions, but also hiring. “At Willis Towers Watson, every senior hire requires at least one woman candidate and at least woman interviewer. The hiring remains merit-based, as it should be, but it is more about ensuring broader diversity of thought and experience on both sides,” Ganu shares.

Also, specifically to address the gender pay gap, in the annual salary review companies should start mentioning and monitoring how much of the bonus pool, and the average salary increase, is going to men versus women, another initiative that Willis Towers Watson has keenly picked up.

Finally, companies should adopt sponsorship and mentorship programmes to encourage women to apply to senior and stretch roles. Ganu shares some interesting research, saying women are more reticent to apply for stretch assignments; even though they may have stronger experiences and credentials compared to male candidates, who are more likely to apply for such roles. “At Willis Towers Watson, we post all vacant roles internally and encourage female candidates to apply,” says Ganu.

Call to action for progressive companies

To learn more about best practices in remuneration, visit https://www.towerswatson.com/en-sg/Services/our-solutions/rewards.

– with inputs from Nabilah Ismail

Facebook, American Express, Microsoft and more. We have been lucky enough to be invited into some of Singapore's coolest office sp..

Only 1 of every 285 Asian women is an executive in companies such as Google, Yahoo, HP and Intel. Why the discrimination?..

Additional highlights include a lower ratio of job vacancies to unemployed persons, and an ease in recruitment and resignation rat..

On the back of challenges such as rising benefit costs, having five generations in the workforce, and more, here is how employers ..

There are plenty of things we should (and shouldn't) do to make ourselves happier in work and life, but why don’t you start with t..