The highest-paying HR roles in Indonesia, Malaysia, and Thailand in 2020

In 2020, Indonesia’s HR industry will see HR business partners (HRBPs) in permanent roles earning the highest pay per annum, between RP468mn to over RP1,040mn.

Similarly, in Thailand, HRBPs will be able to earn between THB960k to THB4.2mn next year, making them the highest-earning HR role in the country as well.

Over in Malaysia HR directors Kuala Lumpur and the Northern region can earn the most in the HR sphere in the coming year, between RM240k to RM750k.

As revealed in Robert Walters’ Salary Survey 2020, employers and HR in all three countries can also expect to see more hiring activity in the coming year, with an even more intense competition for skilled talent across industries.

The data for each country is detailed individually as follows: 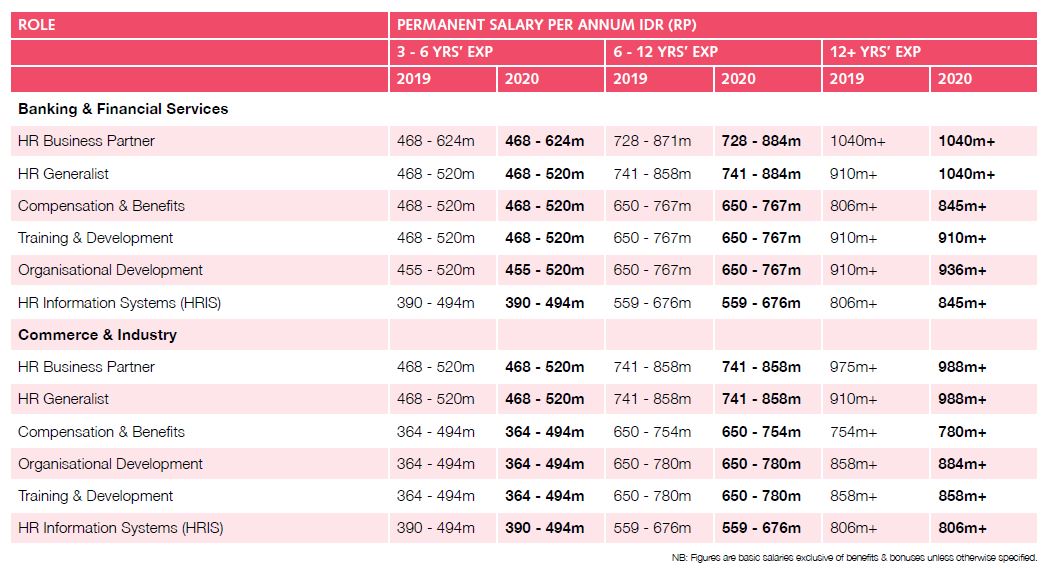 While HRBPs are the highest-earning, the survey revealed that HR generalists, compensation & benefits, training & development, and organisational development roles may not see much of an increase in their annual pay. For instance, HR generalists with three to six years of experience are expected to earn between RP468m to RP520m next year, the same estimate as this year.

Apart from that, on average, HR professionals moving jobs can expect salary increments of between 20% to 30%.

This overlaps with the top motivators for one to move jobs, with compensation & benefits coming up as a top motivator (37%), followed by a better company culture (23%), career progression (18%) and lastly, improved work-life balance (9%).

As for Malaysia, a significant number of HR roles with between five to 10 years of experience can expect an increase in pay next year.

In particular, HR directors and HR managers in the Northern region; as well as profesionals in Kuala Lumpur-based talent management and talent acquisition roles can expect salary increments (per the tables above).

This comes in line with the in-demand HR jobs roles which include HRBPs, talent acquisition & employer branding, and talent management.

On average, HR professionals moving jobs expected between 15% to 20% in salary increases. On the other hand, of those staying in their roles, nearly half (46%) expected a 7% to 15% annual salary increment while 39% expected 0% to 6%.

The remaining 15% looked forward to more than 15% in annual salary increment.

In total, about 26% of HR professionals in the country stayed in a role for less than two years.

The top driver of job satisfaction identified was a good working culture & environment, followed by good work-life balance and receiving feedback and encouragement from management, the survey found.

In line with that, the top motivators for HR professionals in the country to move jobs were better compensation & benefits, and career progression (both at 29%), followed by improved work-life balance (16%), and better company culture (10%). 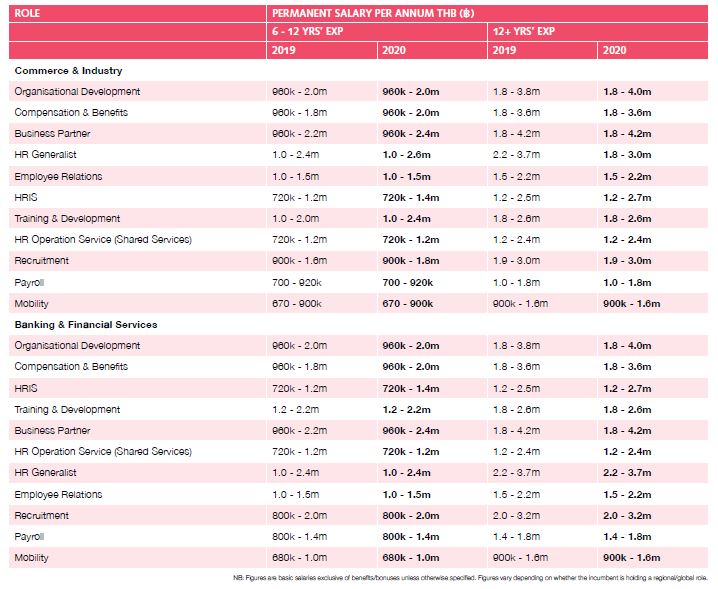 Over in Thailand, in 2020, most HR roles will earn a similar salary as 2019, with slight increments observed in those with more than 12 years of experience.

The higher-earning roles here include HRBPs, HR generalists, as well as roles in organisational development and compensation & benefits.

In Thailand, the survey found that 27% of HR professionals stayed in their roles for less than two years, while on average, those moving jobs expected salary increments of between 20% to 30%.

On the other hand, 36% were motivated to move jobs due to career progression, while 19% would move for better compensation & benefits. Further, 16% ranked better company culture as a key job move motivator, and 14% identified an improved work-life balance in another role.

When it comes to top skills, business partnership, a strategic mindset, and logical & critical thinking were identified as the top skills in demand in Thailand.

An insider’s view on HR in Shanghai vs Hong Kong: Which is more challenging?

MOM report: Singapore salaries up by 5.3%

Sending out a Women's Day greeting to your staff? Here are messages from some of the most inspirational women in the world...

Local and international employers Singaporeans want to work for

In addition to Google and Facebook, home-grown companies like SIA and DBS were identified as employers highly desired by locals. ..

Get prepared for pay for performance

Pay for performance is a useful philosophy, but only if employees understand the rationale for differentiation...

Following its global reorganisation earlier this month, Microsoft is taking steps to notify staff whose "positions will be elimina..