The hardest interview questions for Singaporeans

They may be confident of what they wish to be when young, but working Singaporeans are pretty confused when it comes to nailing down their career plans.

In fact, explaining their future corporate ambitions is a task most locals struggle with during their job interviews, according to a new survey by JobStreet.com.

Polling 120 Singaporeans in total, the survey found 29% of candidates said their were most uncomfortable when asked the question ‘what are your long-term career goals?’.

Most said they found the question difficult as they were unclear of what they want to pursue, and were afraid their goals would appear unrealistic to potential employers.

The next common question that made candidates uncomfortable was having to explain why they wanted to work in that company, cited by 25% of those surveyed.

“Candidates explained the challenge in coming up with a convincing answer was due to the lack of knowledge in the company’s culture and available career paths,” the report stated.

Interviewees were also caught in a dilemma when it came to revealing their strengths and weaknesses to potential employers. 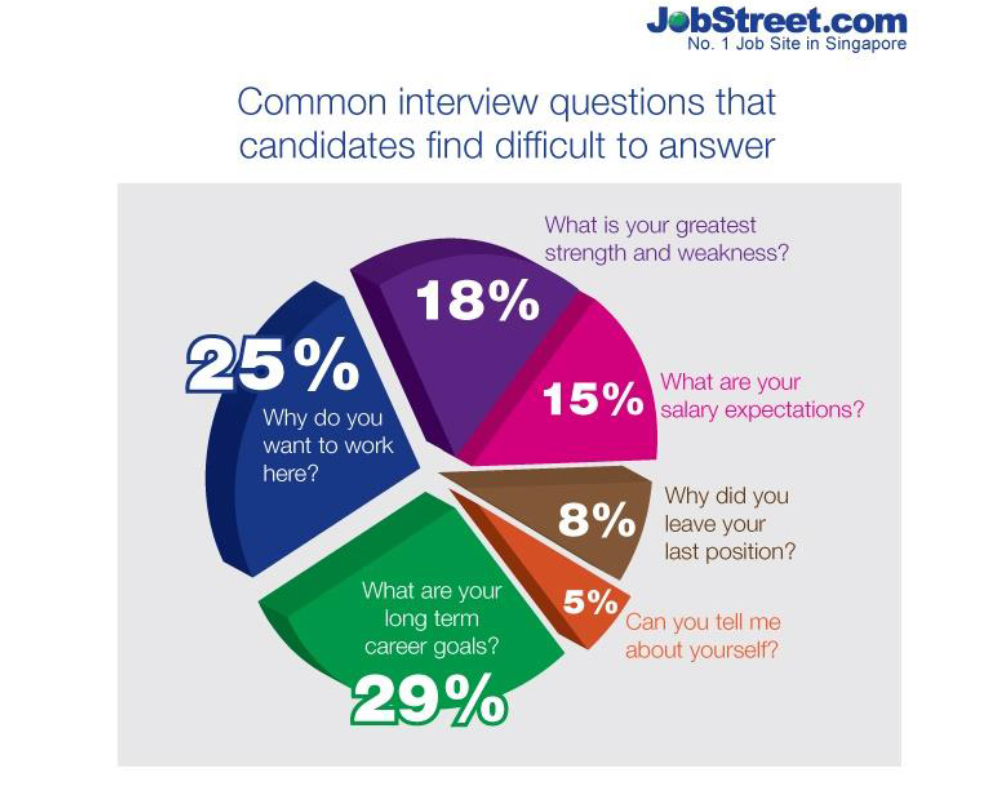 The study also asked candidates about the most outrageous questions ever asked during a job interview. Below are the 5 most interesting ones that stood out in the report:

1.  “Assuming that there were 3 birds perched on a line linking 2 lamp posts, if 1 was shot, how many birds are there left?”

–        Interview for a procurement executive position in a finance firm

2.  “The US has manholes which are round in shape but in Singapore it is usually square. Which do you think is a better shape & why?”

3.   “If you have an urgent request from the company to fulfill a job function within 4 hrs, and you are in the middle of celebrating your dad’s birthday at the moment. What will you do?”

–        Interview for an IT engineer position in a technology firm

4.  “Do you think a doctor can trade stocks better than you and why?”

–        Interview for an institutional dealer position in a securities firm

–        Interview for a manager position in a healthcare firm

How start-ups can set up HR operations from scratch

Chinese airlines declare a talent war on the world

With rocketing demand for air travel in China, airlines need to hire almost 100 pilots a week for the next 20 years to meet deman..

S$516mn recovered in CPF arrears to benefit 360,000 employees in Singapore

The CPF arrears recovered were from underpayment, non-payment and late payment of CPF contributions by employers. ..

Working from home? Here’s some music to help you get in the zone

These four playlists will cater to various scenarios every remote worker would face - from getting creative to taking a break...

Planning incentives for your staff? Think carefully, it could turn them unethical

A new study found while these rewards can increase employee performance, they can also lead to unethical behaviour in the workplac..

Beyond the magical $75k, further increases in income no longer improve employees’ ability to do what matters most to them...