Report: Malaysia has the world's second most complex HR and payroll practices, right behind Belgium The most complex jurisdictions are characterised by frequent changes in HR and payroll legislation, and uncertainty surrounding the interpretation of laws and policies. Indonesia ranks seventh, while both Thailand and Singapore ranked 50th.

Malaysia has emerged as the second most complex market in the world for HR and payroll practices, right behind Belgium, a new report by TMF Group has revealed.

At the same time, Indonesia ranks seventh, while both Thailand and Singapore have taken the 50th spot.

The report, titled HR & Payroll: Navigating complex requirements in turbulent times, ranked 77 jurisdictions by the complexity of HR and payroll, exploring the theme of employer and employee relations across four areas:

Overall, based on the above areas, the top 10 most complex jurisdictions identified for HR and payroll practices were:

According to the report, the most complex jurisdictions are characterised by frequent changes in HR and payroll legislation, and uncertainty surrounding the interpretation of laws and policies.

A jurisdiction's approach to the employer/employee/government relationship is also a key factor, as is the complexity of requirements around payroll reporting and compliance.

On the other hand, the 10 simplest jurisdictions worldwide included:

The report also noted that the least complex jurisdictions are characterised by less "burdensome "payroll reporting and compliance requirements, with a legislative environment that facilitates onboarding and termination processes.

Conditions around the hiring of foreign workers and the legal requirement of certain employee benefits are also often less strict in these places than elsewhere.

A look at the four key factors jurisdictions were ranked on

There is no doubt that the ease in which an employer can terminate employment contracts is a good indicator of how attractive the business environment seems.

In line with this, the report found that of the 77 jurisdictions studied, 61% present the possibility for employers to terminate an underperforming employee with less than a month's notice, while more than one in five allow them to do so with a week's notice or less.

This is more common in the Americas, wherein four in 10 jurisdictions allow employers to terminate underperforming employees by giving a day or less of notice. Furthermore, companies are far more likely to be allowed to terminate employment without citing a reason in both South America (80%) and North America (64%).

In contrast, this is only allowed in 13% of EMEA jurisdictions and it is not possible in any APAC jurisdictions. 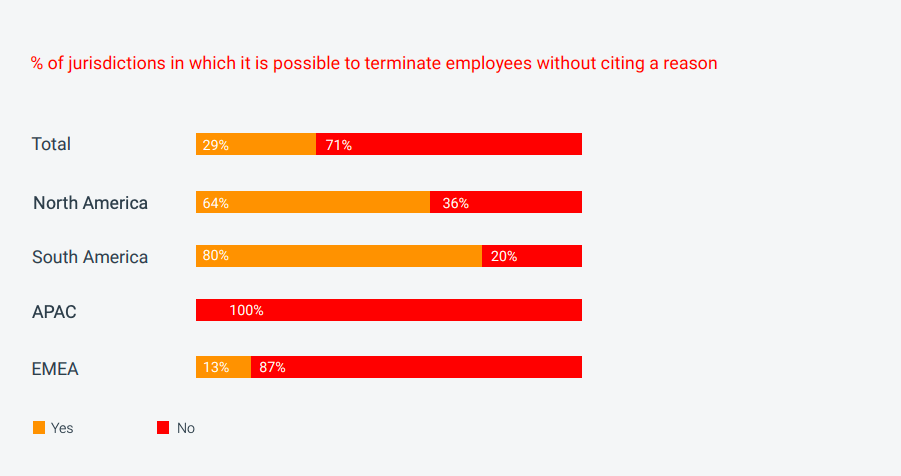 On a global level, 62% of jurisdiction do specify rules about the length of notice given during a termination based on the type of contract with an employee, a practice which is more significant in APAC where eight in 10 jurisdictions (79%) see this as a differentiating factor.

Another key factor in APAC is length of service (50%), as well as seniority (50%), followed by the industry with 36% of jurisdictions seeing it as a differentiating factor.

In general, these factors also saw more prevalence in APAC, as compared to the Americas and EMEA. 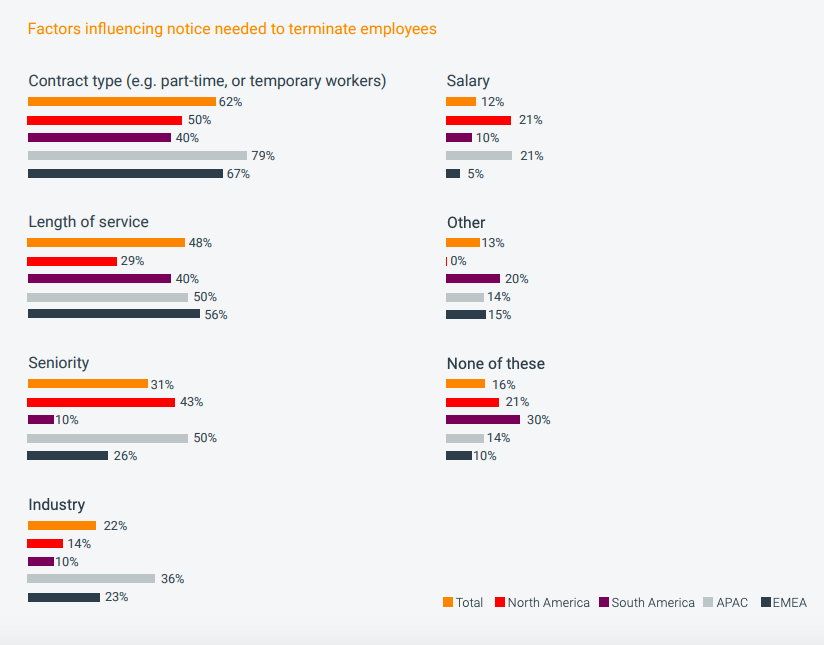 The ongoing management of HR and payroll

Research in the report revealed that among a range of employee benefits available across companies, there is a set that remains legally required for permanent staff in the vast majority of jurisdictions. This includes minimum wage (91% globally, 93% in APAC)), paid vacation (88% globally, 86% in APAC), and paid maternity leave (87% globally, 93% in APAC).

Apart from the above, other employee benefits that are required in APAC jurisdictions include: 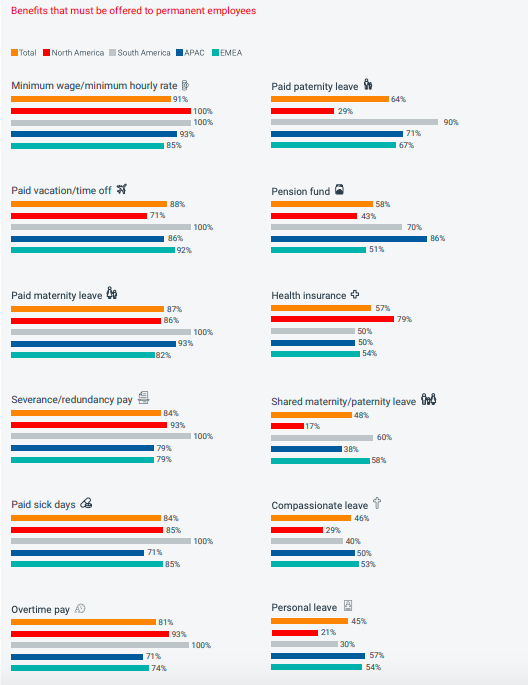 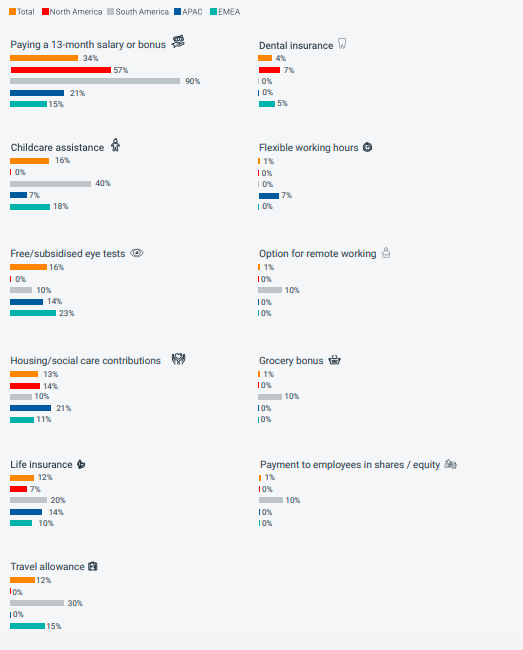 The relationship between international workforces and local rules

More than six in 10 jurisdictions worldwide have limits in place for hiring foreign workers based on their countries of origin, which EMA being the most likely to do so. At the same time, 77% of the jurisdictions studied currently specify requirements about the country of origin.

While this is so, in terms of other restrictions on foreign labour, APAC places the most stringent requirements on its companies. In particular, nine out of 10 jurisdictions (93%) within APAC require companies to hire only foreign workers that comply with certain skill frameworks (compared with 68% globally), while seven out of 10 (71%) specify that workers coming to their jurisdictions must fall within a certain salary threshold (38% globally).

In the same vein, the report highlights that HR and payroll complexity could vary within jurisdictions themselves, among their different cities and/or states. While most benefit requirements are the same across an entire jurisdiction in most cases, there are four that vary across a more significant percentage of jurisdictions, either at a regional or city level, namely minimum wage (12%), travel allowance (12%), payment to employees in shares/equity (10%) and paid maternity leave (9%).

Additionally, there are seven jurisdictions in which benefit provision legislation is highly localised and often subject to varying legislation for different cities and states, including Malaysia and India. 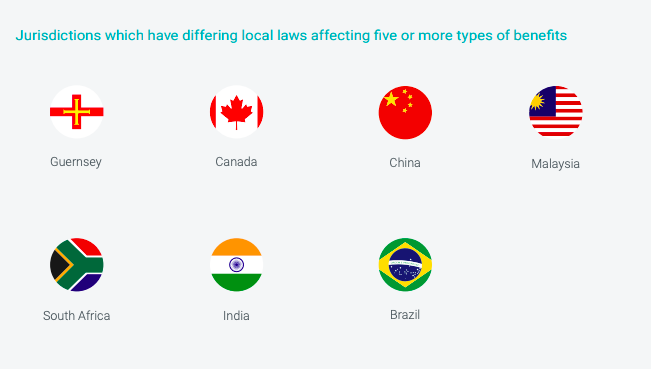 Technology as an enabler for both employers and employees

The COVID-19 pandemic has not just impacted the economy, but also how HR and payroll processes are carried out, with one of the most important being the growing need to support remote working. This, of course, depends on how well-equipped a company is with technology, to facilitate the process efficiently.

On that note, the research found that 74% of jurisdictions do now provide the option for remote working, up from 71% in 2019. For the vast majority of these, it is not legally mandatory to offer this to workers but is instead a way for employers to compete with one another when offering benefit packages, the report stated.

That said, there are still jurisdictions where remote working is either rarely or never offiered, and this includes, Indonesia, Hong Kong, Qatar, Russia, the UAE, and more. 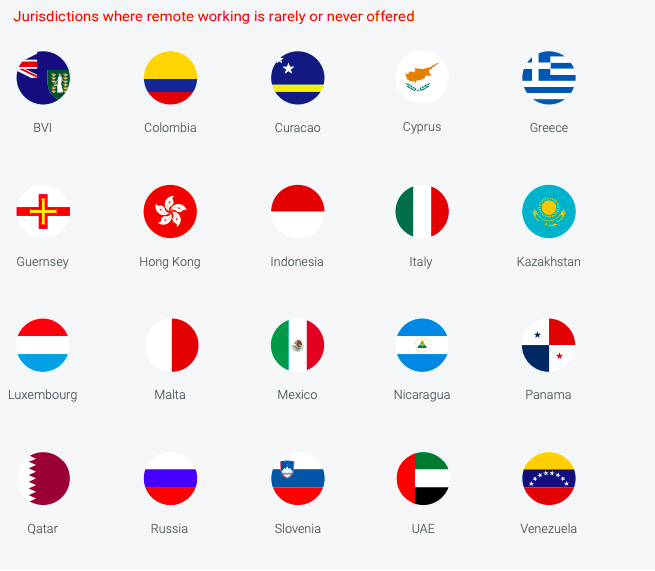 Separately, with technology proving to be more important now than ever, it has changed the way payroll data is presented.

In particular, close to eight in 10 (79%) jurisdictions surveyed worldwide require businesses to submit payroll data to the government, up from 67% in 2019. Of these, 76% require the submissions to be done electronically, up from 71% in 2019, and this growth is driven by APAC jurisdictions, where the proportion requiring this increased from 50% to 86% between 2019 and 2020.

Similarly, businesses must report on employee bonuses in 58% of jurisdictions, up from 49% in 2019. 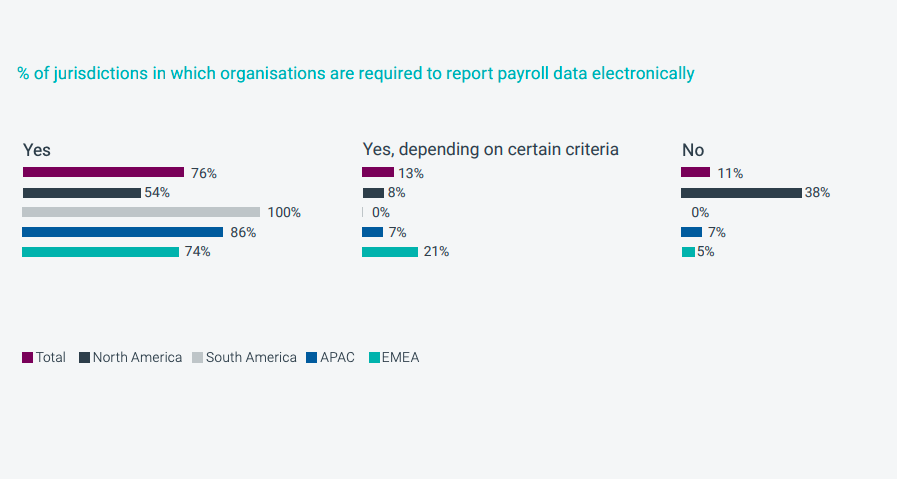 While technology has indeed proven to be reducing complexity, the report does caution against possible difficulties it could present, including:

[ALSO READ: Your 5-min guide: What HR must do in case errors are detected in your HR and payroll systems]