Recruiters, do you have 17 weeks to spare on a bad hire?

While small and midsize firms continue to expand, the strength of their hiring process seems to be shrinking. In a Robert Half study of over 1,000 business and HR heads of SMEs, 81% admitted to making a bad hiring decision. This mistake caused them to waste about 17 weeks to rectify.

The survey, held in the United States, listed numerous costs of a bad hire, such as an estimated 45 hours being wasted on hiring and onboarding people who ultimately did not work out.

Additionally, more than half of respondents (53%) pointed out bad hiring led to increased stress levels on the team. One in five (20%) cited decreased confidence in the managers’ ability to make good hiring decisions.

ALSO READ: Your bad hires are weighing you down

Respondents (58%) claimed that they can identify a bad hire fairly quickly, i.e. less than a month – however, the real challenge lies in correcting the mistake. It took more than twice that time, 8.8 weeks, to let the person go. Before a replacement is found and put on the job, a process that can last up to almost five weeks, 68% of business push the workload down on their existing staff.

The survey also summarises ways to minimise the risks and costs of a bad hire: 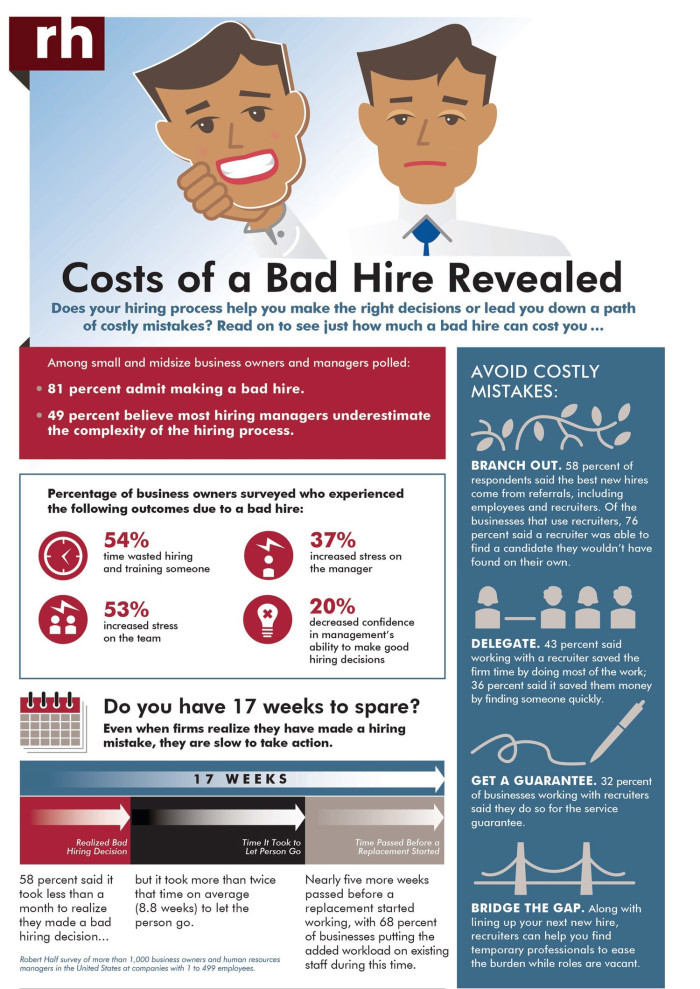 Apart from a lack of dedicated HR function in some organisations as a reason behind faulty hiring processes, Paul McDonald, senior executive director at Robert Half, commented: “Multiple demands on a business owner’s time also can pull attention away from recruiting and cause it to fall to the last priority.”

66% believe Gen Y are difficult to recruit in financial services

While Indonesia leads the list of APAC nations that support staff with the right people, places, and technology to work optimally ..

How to stop your staff from eating their feelings

Think you're being nice to staff by offering them food-related perks? Think again...