Ranking firms that are the worst perpetrators of wage theft

Technology has made us more connected than ever and that means the ability to work anywhere. Unfortunately, that means that wage theft where employees are expected to work after hours is pervasive in corporate America. Even with an increasing trend around work-life balance and wellness in attracting talent big banks and insurers are among the worst perpetrators.

According to a new report by Good Jobs First, many large corporations operating in the United States have boosted their profits by forcing employees to work off the clock, cheating them out of required overtime pay and engaging in similar practices that together are known as wage theft.

The researched analysed federal and state records in the United States that showed corporations have paid out US$8.8 billion to resolve more than 1,000 wage theft class action lawsuits since 2000.

Walmart, long associated with such practices, has paid the most, but the list of the most-penalised employers also includes Bank of America, Wells Fargo and other large banks and insurance companies as well as major technology and healthcare corporations. Many of the large corporations are repeat offenders; 450 firms have each paid out $1 million or more in settlements and/or judgments.

“Our findings make it clear that wage theft goes far beyond sweatshops, fast-food outlets and retailers. It is built into the business model of a substantial portion of Corporate America,” said Good Jobs First research director Philip Mattera, lead author of the report in a press statement.

Among the dozen most-penalised corporations, Walmart, with $1.4 billion, is the only retailer. Second is FedEx with $502 million. Half of the top dozen are banks and insurance companies, including Bank of America ($381 million); Wells Fargo ($205 million); JPMorgan Chase ($160 million); and State Farm Insurance ($140 million). 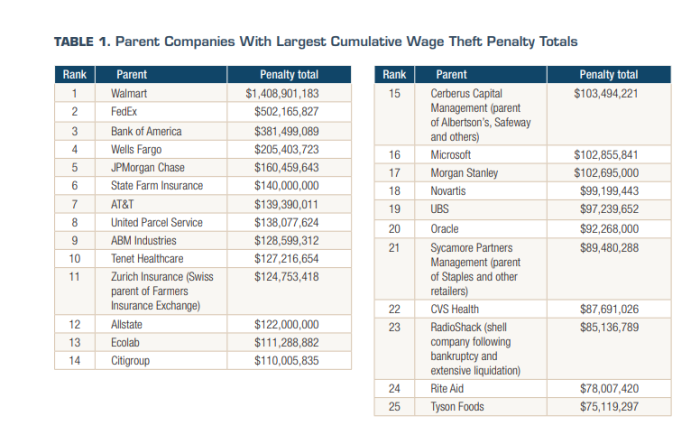 ALSO READ: Hiring and salaries in Hong Kong for 2018

Are you guilty of these common business etiquette blunders?

Over 7,000 jobs offered at MIDA’s 50th anniversary in KL Sentral

In fact, 76.9% of the openings were for managerial, professional and technical, as well as technicians and associate professionals..

The Futurist: HR will be more focused on culture in 2026

A company's culture - that cannot be copied - will enable it to attract the "right" talent, says Yeoh Sai Yew of AirAsiaX...

Leading personalised learning at Pandora and Alva Hotel by Royal

The turning point of any successful personalised learning strategy...

How anxiety leads your team to make bad decisions

You may want to go easy on the most easily-stressed members of your team, as they’re likely to make worse decisions in that ..