More than a fifth of APAC candidates submit inaccurate information

While hiring, make sure to look out for discrepancies.

According to a recent report by HireRight, more than one in five (21.5%) background checks conducted on job candidates in the Asia Pacific region in 2016 found inaccuracies in information supplied by candidates – almost three times higher than the discrepancy rate globally (9.7%). This finding was based on the results of background checks performed by HireRight in the APAC region last year.

Discrepancies are marked when information provided by candidates does not match records of their previous places of employment, education or other relevant organisations and databases; this includes a disparity in dates of education or employment, qualifications attained, graduation dates, positions held and job responsibilities.

As more employers in APAC integrate background screening into their talent acquisition process, and more high-profile cases of CV fraud in APAC are reported in the media, candidates in the region are becoming more aware of background screening and its impact – resulting in a lower discrepancy rate compared to the previous year (29%).

According to HireRight’s data, Hong Kong, India, Philippines and Singapore have experienced the largest decrease in APAC candidate discrepancy rates over the last 2 years.

Digging deeper, HireRight found that professional license discrepancies represented the highest rate in 2016. In particular, one in four (25%) candidates inaccurately reported license information in 2016 – twice as many as in 2015 (13.8%).

Conversely, the biggest decrease in discrepancies among Singapore candidates was education qualifications, with the rate in 2016 (18.3%) less than half that of 2015 (40.9%). 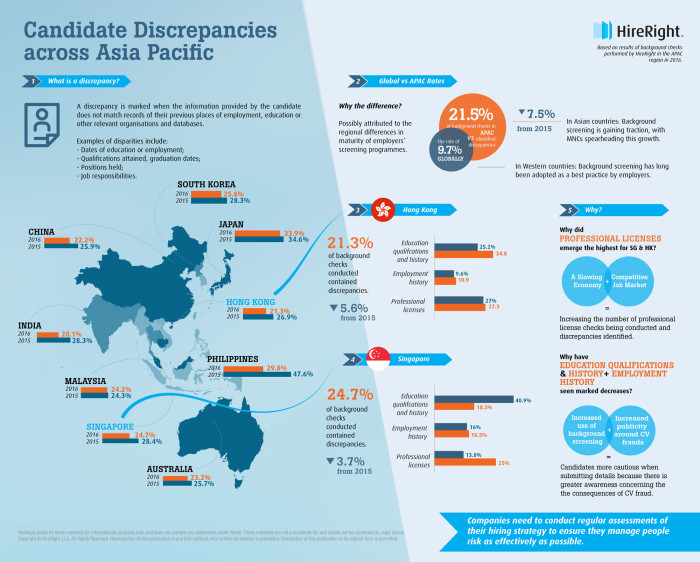 From religious bans to women in leadership, we take a look at the top stories on diversity and inclusion from this year...

Half of employers in Singapore are expecting to increase headcount in the first half of this year...

Hongkongers may find their commute to and from work slightly more difficult during the upcoming three days...

Why today shouldn’t be just another day at the office

This year, simply acknowledging World Health Day as a company could leave you with a healthier, more productive workforce...

Hong Kong is APAC’s most productive, innovative and collaborative market

Staff are supported by the right people in offices, are empowered with the right technology and have the right tools to work remot..