According to the latest Job Vacancies 2017 Report released by the manpower research and statistics department of Ministry of Manpower (MOM); employers in Singapore have filled vacancies more quickly in 2017 compared to the year before (2016). Some of the key findings include: 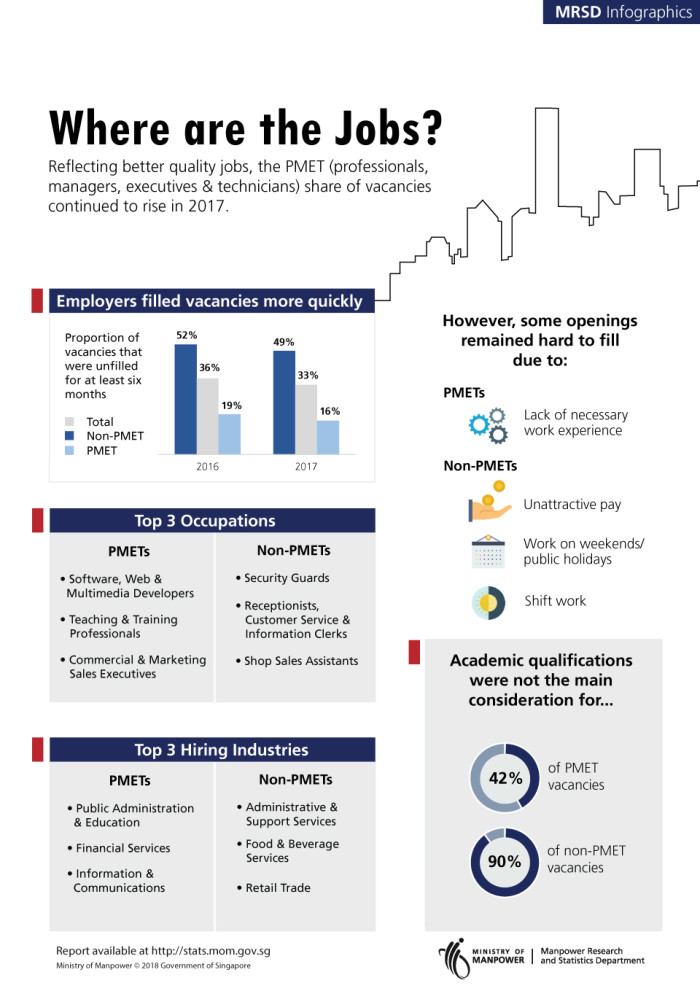 In the report, the proportion of vacancies unfilled for at least six months continued to decline, from 36% in 2016 to 33% in 2017. Non-PMET vacancies remained harder to fill than PMET openings. In fact, almost half (49%) of non-PMET vacancies were unfilled for at least six months, in particular among service and sales workers. Unattractive pay, work on weekends/public holidays and shift work continued to be reasons these openings were unattractive to locals.

On the other hand, only 16% of PMET openings were unfilled for at least six months. They included openings for software, web and multimedia developers, which employers attributed to candidates lacking the necessary work experience and specialised skills.

Nearly half of all vacancies were PMET positions

The report also showed that the top PMET vacancies were in occupations such as software, web and multimedia developers, teaching and training professionals, commercial & marketing sales executives and management executives. By sectors, PMET job vacancies were mainly in public administration and education, financial services, professional services, and information and communications.

For non-PMET occupations, the vacancies were largely for security guards, receptionists, customer service and information clerks, shop sales assistants, waiters, cleaners, as well as material and freight handlers. By sectors, the non-PMET vacancies were mainly in administrative and support services, food and beverage services and retail trade, which typically had lower staff retention.

In conclusion, MOM said: “As the nature of jobs continues to evolve with technology and industry transformation, mismatches will be a growing challenge. For employers that face difficulty in filling non-PMET jobs, more needs to be done to redesign and improve the quality of these jobs, as well as to facilitate job matching.”

“To overcome skills mismatches particularly for PMET jobs, the government’s wide range of SkillsFuture and Adapt and Grow programmes are available to help jobseekers to pick up the skills relevant to job openings. Employers should widen their pool of prospective candidates and tap on government support to meet their hiring needs,” it ended.

A workplace accident resulted in the death of Tan Siau Tsing, an assistant manager of yard operations...

Only 54% of employees in Singapore believe they are compensated fairly

Mercer's Singapore Employee Engagement Index also found that Singaporeans were among the least engaged in the APAC region...

LOOK at Cadbury’s hoax response to a candidate

This letter from Cadbury, supposedly in response to a man’s job application to become a global quality manager, has been identifie..

The updated list covers a range of jobs across 18 industries including construction, real estate, financial activity, and more...