TripAdvisor moved in a new space in September last year to support the company’s rapid growth in the region.

Situated in the PricewaterhouseCoopers building, the company boasts a travel-themed workplace, complete with the world map painted stylistically on the pantry wall, passport stamps on glass partitions between departments and meeting rooms designed after London’s famous red phone booths.

The office, which is twice the size of its previous location in the Singapore Tourism Board building, also reflects the company’s young and vibrant culture.

“One of my colleagues was just telling me today that she saw three people peering through the front glass doors trying to get a better look at our offices, so it does create office envy as well,” Sheryl Tan, senior HR manager for TripAdvisor APAC, says.

There is also a lot of open and break out spaces within the office, which Tan hopes will help facilitate engagement and casual interaction among employees, which the organisation believes will lead to higher productivity.

She adds the company asked for a lot of feedback from employees before the move to find out what they wanted in the new office. 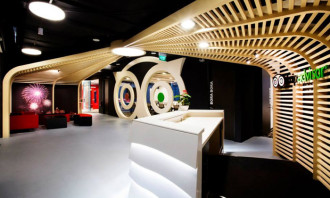 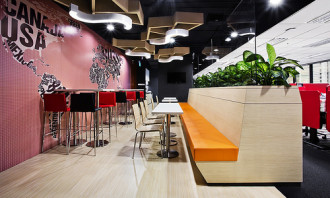 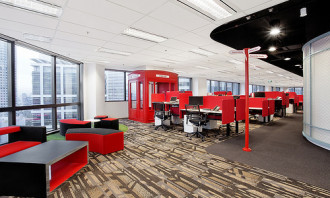 One of newer the office perks they introduced during the move was providing high-adjustable desks.

“In the old office, there were already people sitting on gym balls, so we felt we needed to provide an environment which supports the healthy lifestyle our employees were leading.”

The company also took lessons from the former office.

“We really wanted an open office so people can mingle and talk, but at the same time, with the different functions, we were also conscious that some would be busier than others.”

When creating a new office space, Tan says it’s important to always keep in mind the kind of office environment you want to create.

“We also looked into the inter-dependencies of the teams so we could place functions which worked together close to each other. Listening to the people is very important.”

The superstitious work beliefs of Singaporeans

The 10 best countries in the world for young people

The Minimum Wage Technical Committee is currently carrying out a study to determine the most appropriate minimum wage rate...

"Most only perform their tasks with average effort if they aren’t given the opportunity to lead," says HR head, Jacqueline Yap...

When you stay with Far East Hospitality, expect far more than just a serviced apartment experience with far more choices, perks, a..