Classic video conferencing gaffes (and how to avoid them) 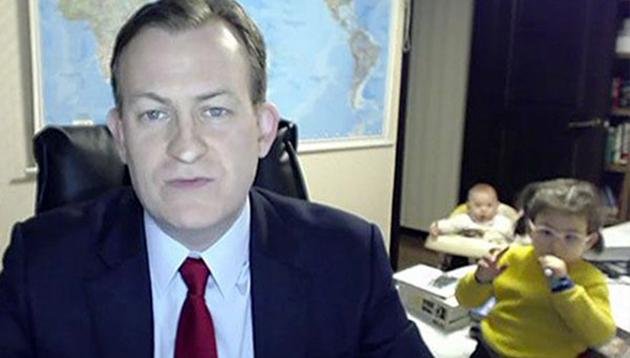 With working from home becoming the ‘new normal’ as the coronavirus outbreak compels us to social distance ourselves from colleagues and work associates – it also gives rise to a whole range of fraught scenarios.

This is especially true as many of us turn to video conferencing to communicate with colleagues. The danger is beautifully illustrated by American professor Robert Kelly (pictured above) whose mishap went viral.

During an in-depth interview with the BBC on South Korean politics – which was being beamed across the globe – first Kelly’s eldest daughter came dancing into the room, and into shot, followed a few seconds later by the younger son in his walker. Shortly after, with perfect comic timing, the mother burst into the room and saved the interview by ushering both children from the room and closing the door.

Solution: If you have young children in your house always lock the study door before beginning your video conference.

A more recent – and more embarrassing situation – happened just last week. As reported by Yahoo! Lifestyle, 11 colleagues, all visible on screen, were listening intently to the presenter on a Zoom group chat when one of them got up and started walking. Let’s call her Mary.

Unaware that her laptop camera was still on and she was in plain sight of the others, Mary can be seen entering her bathroom, pulling down her trousers, sitting on the toilet and going about her business, while her colleagues reacted by averting their eyes or cringing with embarrassment.

The employee finally realised that she was on camera a few moments later and moved her laptop away, but not before one male colleague said: “I saw nothing,” while another colleague added, “Poor Mary.”

The video has since gone viral, accumulating more than 7.5 million views on Facebook.

Solution: Always ensure your laptop camera is switched off or pointing the other way when nature calls during a video conference.