This is followed by CEOs in Switzerland, Germany, and Spain taking home salaries that are worth 148 times, 147 times, and 127 times respectively compared to the average worker salaries in these countries.

Closer home, average CEO salaries in Singapore, Malaysia and Hong Kong are pegged at 74 times, 148 times, and 102 times the average salaries of workers respectively, as showed in the table below:

Poland, Austria and Denmark have been highlighted as the countries with the lowest ratio of CEO:employee divide, pegged at 28 times, 36 times, and 48 times, respectively.

Globally, the largest sectoral disparity was in the media sector, where CEOs earn around £17.8 million compared to an employee’s salary of £31,197 (or a ratio of 571:1). 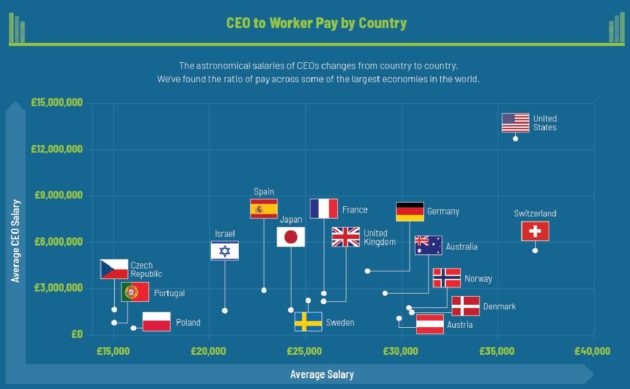 Breaking down some of the other data within the report, here are the highlights:

Action for change: How leaders from BASF, Emirates, Henkel, and more are taking responsibility for D&I

Actuaries are all the rage this year, with most earning an average of US$94,209. Which others made the list?..

Redundancies in Singapore have declined in Q1 2017

Are you dealing with cats, elephants and snakes at work? The office can be a jungle, but here's how to keep the big bullies at bay..

The new centre will focus on expansion in capabilities and talent to support the company's growth. ..