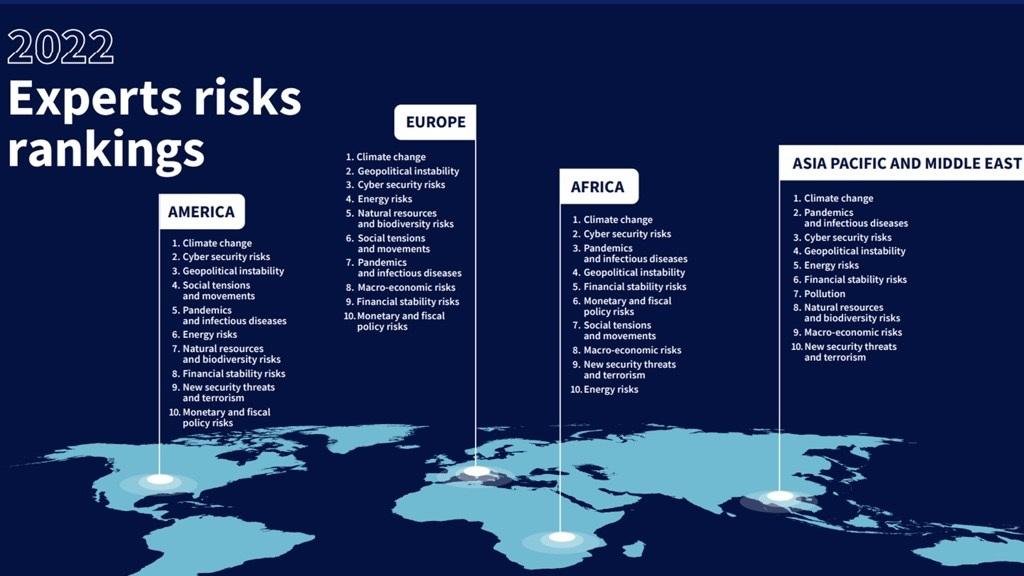 Further, for the first time, climate change was cited as the number one concern of risk experts around the world.

In a survey of experts as well as the general public across the world, on the five risks they are most concerned about, it was found that the former are worried about economic issues such as financial instability, macro-economic risks, and monetary and fiscal policy risks in their top 10, while the latter are more anxious about the twin threats of pandemics and infectious diseases.

This emerged in the AXA Future Risks Report 2022, wherein pandemic and infectious disease risk has dropped to fifth in the experts’ list, while for members of the public ranked it second only to climate change, reflecting how COVID-19 has affected daily life for many.

On the other hands, risks that experts cited as their most worrisome (financial instability, macro-economic risks, and monetary and fiscal policy risks), are yet to gain traction with the general public, who only included financial instability in their top 10 – and in 10th place.

Among other risks that concern the public more than experts is terrorism - new security threats and terrorism rank 6th in the general public’s responses but did not rank in experts’ top 10 this year at all. Members of the public who selected this risk were most concerned about mass shootings, especially in the US.

The report, that runs for the ninth year in a row, covered views from almost 4,500 risk experts from 58 countries, who were asked to choose from a selection of 25 risks based on their potential impact on society over the next 5-10 years. AXA also partnered with IPSOS to survey close to 19,000 individuals who make up a representative sample from 15 countries.

Within Asia, views were taken from experts in Indonesia (361), India (268), and the Philippines (142). Additionally, among the general public, 1,000 people were surveyed in the markets of China, Hong Kong, and Japan.

How do risk perceptions compare across regions?

The following are some regional highlights of the risks cited in the report:

The public's worries about health are persisting

For experts, risks related to pandemics and infectious disease are becoming less salient – ranking fifth in this year’s survey, down from third last year and first in 2020. It dropped furthest in Europe, while experts in other geographies – notably Africa and Asia-Pacific and the Middle East – continued to give it a higher rank.

Members of the public also remain more concerned than the experts: they ranked this risk top last year, and it has fallen only to second in this year’s ranking. It is still top ranked in Africa and Asia.

Experts' ranking of pandemics and infectious diseases by region:

Overall, this trend indicates that persisting health concerns are broadening from COVID. In 2021, 41% of general public respondents who selected pandemics among their top risks cited the long-term impacts of COVID as their main concern. That proportion more than halved, to 19% – instead, members of the public were more likely to say they worry about new strains of other infectious diseases (32%, up from 23%).

With new health scares regularly featuring in the media – from the spread of monkeypox to a surge in hepatitis among children and findings of polio in UK sewage waters – the public focus on health risks looks likely to continue.