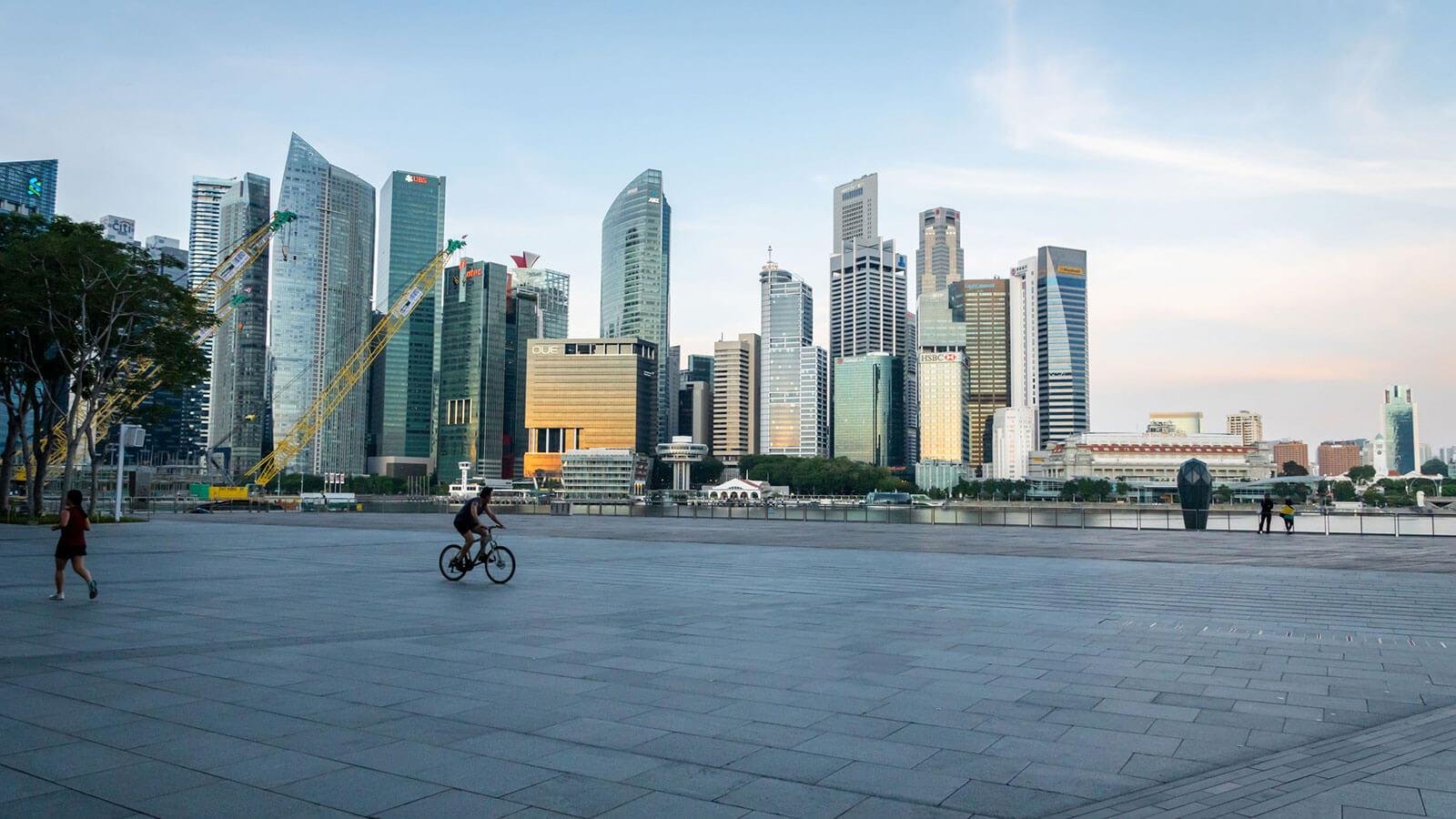 Nearly four in 10 Singapore residents (39%) who were retrenched in Q1 2020 were able to find new jobs by June, the Ministry of Manpower (MOM) has revealed.

According to its latest Jobs Situation Report, released yesterday (7 September), of this group, 60% were able to attain new jobs that either paid similar salaries, or at least 5% higher than their previous jobs.

On the other hand, the remaining 40% received new salaries that were at least 5% lesser than what they earned in their previous jobs.

These observations were based on a study the Ministry did on 2,160 residents retrenched in 1Q 2020, using the same methodology as a study on retrenched workers carried out in Q1 2018, which observed that 47% had re-entered employment by June 2018.

In comparison, the 2020 study recorded a difference of 8%-points. MOM noted: "This suggests that job prospects for retrenched workers held up, despite their job search taking place in a much weaker employment market and within the Circuit Breaker period during which many activities were disrupted. We are continuing to monitor the employment outcomes of the retrenched workers." 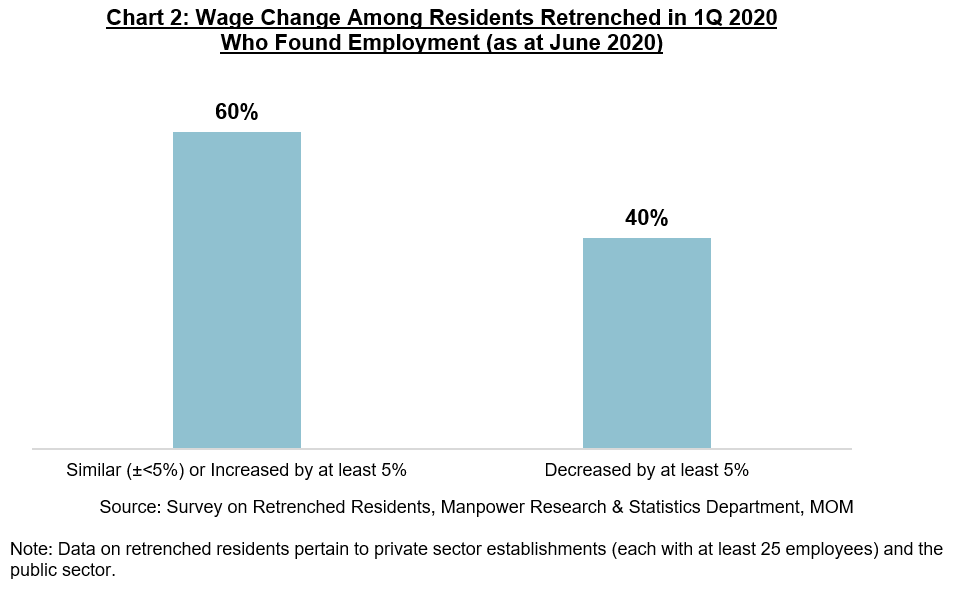 The report also found that seven in 10 retrenched residents had re-entered employment within one month; at the same time, PMETs and residents in both the 30s and 40s were more likely to have found jobs.

Of this group, a majority (77%) were able to find similar occupations, while the remaining 23% found different occupations.

Further, slightly more than half (53%) of these retrenched residents possess transferrable skills which thus enabled them to switch industries.

Overall, the findings suggest that while hiring slowed in Q2 2020, it did not come to a standstill; and despite the weakened employment market, a majority of retrenched residents were still able to find jobs "relatively quickly" and with "modest impact to (their) salary". 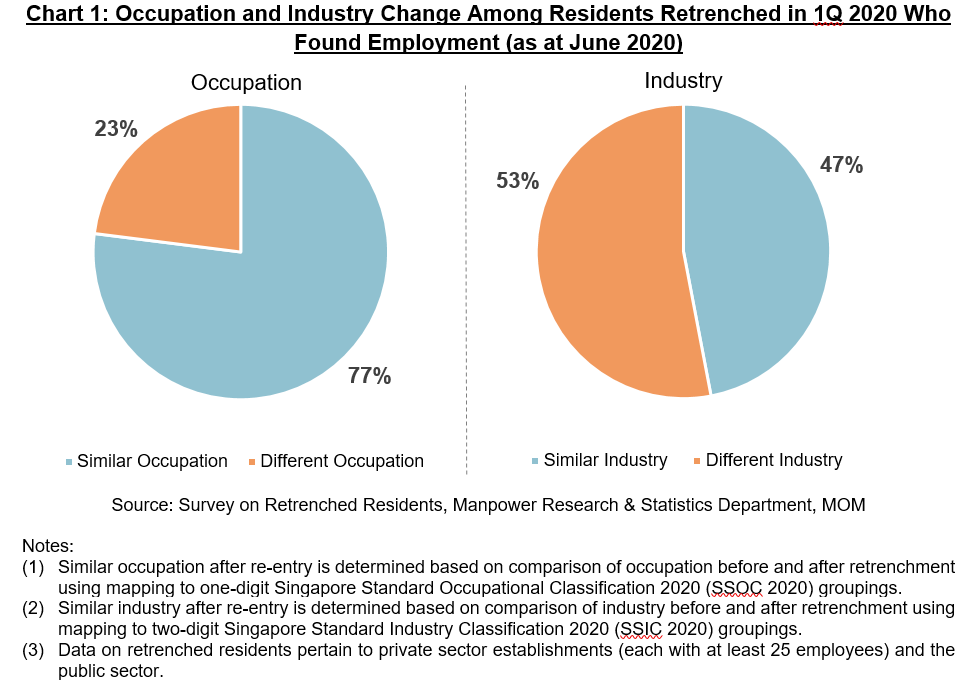 Recap on government support measures for businesses in retaining/hiring workers

The Jobs Support Scheme (JSS) was launched earlier this year, with over S$16bn in payouts disbursed so far, benefitting over two million local workers in more than 150,000 firms.

With the scheme extended till March 2021, most businesses will receive wage support for 17 months to help them retain as many workers as possible.

On top of this, the government announced last Friday (4 September) that from March 2021, eligible firms in Singapore can look forward to receiving support payouts as part of the government's Jobs Growth Incentive (JGI).

The scheme, which aims to support businesses in the hiring of locals, will cost the government a total of S$1bn. [Read more about the JGI scheme here]

The MOM added: "However, we recognise that despite companies’ best efforts and the coverage from JSS and JGI, some employers may still need to make adjustments to their businesses to stay viable, including conducting retrenchments. The Government will take active steps to ensure that workers who faced displacements would be able to find alternative employment and get back on their feet quickly."

For more information on the various initiatives in place for workers, refer to the full Jobs Situation Report here.