Human Resources highlights the three key takeaways of the report below:

#1: Retrenchments were lower than in Q2

Of the Q3 2018 numbers, 60% and 32% of retrenchments were made up by the services and manufacturing sectors respectively, while the remaining 8% was made up by the construction sector.

#2: Employment growth more than doubled that in Q2

A quicker hiring process by employers has resulted in a growth of total employments, excluding foreign domestic workers (FDWs) by 15,200 – more than twice the employment of 6,500 observed in Q2. This growth was also significantly higher than that in 2017, where total employment was -4,100.

An increase in employment in the manufacturing sector was seen, following 15 consecutive quarters of decline. The services sector, which includes areas such as social and personal services, and professional services excluding FDWs also saw growth with 12,300 employments.

However, the construction sector saw a decline by 400, a clear reflection of the weakness in public sector construction activities.

The unemployment rates of citizens and residents were stable at 3% and 2.9% respectively from June 2018 to September 2018. There was a slight increase in the overall numbers, from 2% to 2.1%. These rates were either the same as or lower than those observed in September last year – an overall of 2.1%, citizen rates of 3.2% and resident rates of 3.1%.

Despite these, numbers were still a little better than those seen in March this year and this indicates the continued inflow of job seekers entering the labour market.

Take a look at the following infographic for an illustration of the numbers: 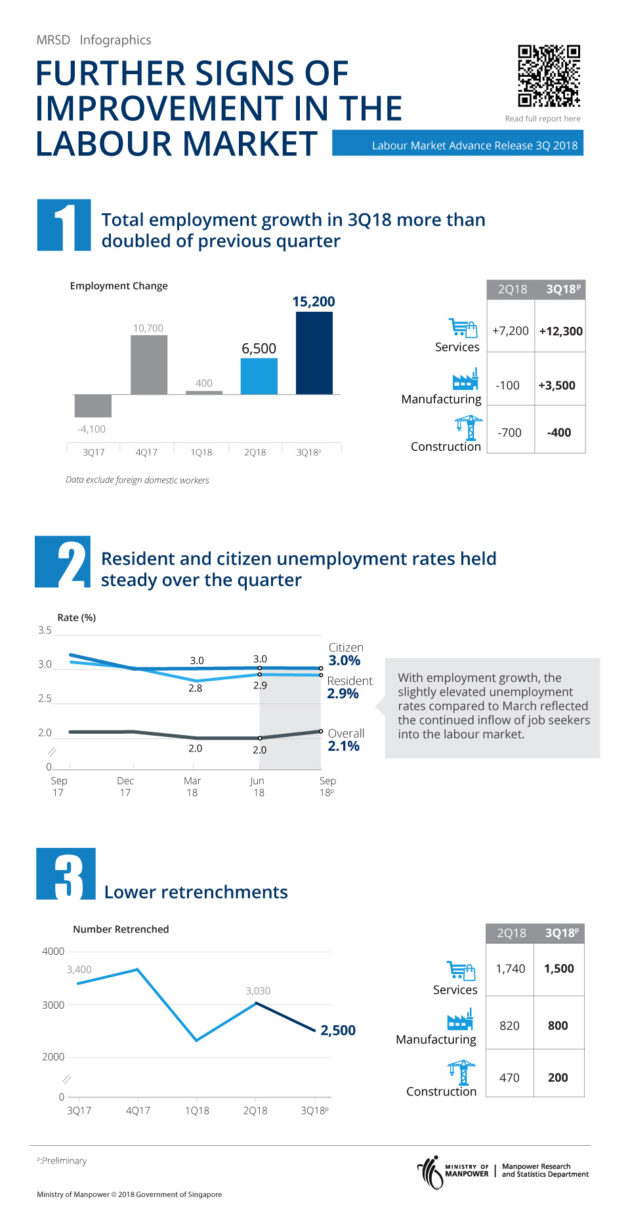 Why HR leaders should ease workforce anxiety on AI

The Futurist: Why employee retention is a thing of the past

Retention should be about supporting staff, empowering them with the resources and platforms they need to grow and develop. ..

Expecting the second highest increase is Thailand, with 13.9%. On the other hand, China can expect to see the smallest increase at..

Why posting selfies on social media during work trips is unsafe

The trend of 'Insta-bragging' has been adopted by two-thirds of corporate travellers, putting them at risk of data theft and perso..

Dick Costolo will step down on 1st July and will be replaced by Jack Dorsey, who will act as interim CEO till a permanent CEO is f..