The 9th edition of the Melbourne Mercer Global Pension has shown that Malaysia has scored a C-rating in the index – ahead of most Asian countries, but still with lots of room for improvement.

Measuring 30 countries and covering 60% of the world’s population, the study urges countries with unsustainable pension systems to take action now, rather than risk the need to take even more drastic action in the future.

This year’s index revealed that Denmark, in its sixth year running, has retained the top position with an overall score of 78.9. This is ahead of the Netherlands (78.8)  and Australia (77.1).

However with Malaysia scoring 57.7 on the index,  Hash Piperdy, CEO of Mercer Malaysia, commented: “Malaysia has a strong pension infrastructure with some good features, however there are several major risks that should be addressed before we can move up to a B or even an A rating. These improvements are vital for the long-term sustainability and efficacy of the system.”

“The public sector pension system will only get more expensive over time and there are still far too many Malaysians without access to any form of pension savings. There should be a minimum level of support for the poorest individuals; and greater incentives for employers and other industry and community groups to set up Private Retirement Schemes (PRS),” he added.

Malaysia’s retirement income system is based on the Employee Provident Fund (EPF) which covers all private sector employees and non-pensionable public sector employees. Under the EPF, some benefits are available to be withdrawn at any time with other benefits preserved for retirement.

The Malaysian index value increased in value from 55.7 in 2016 to 57.7 in 2017 primarily due to the inclusion of the new economic growth question in the sustainability sub-index. According to the report, the overall index value for the Malaysian system could be increased by:

In comparison, the neighbouring Singapore has a score of 69.4 – marking it the top country to have the best pension system in Asia according to the index.

Singapore’s retirement income system is based on the Central Provident Fund (CPF) which covers all employed Singaporean residents. The Singapore government implemented changes to the CPF in 2016 which include providing minimum pension top-up amounts for the poorest individuals, more flexibility in drawing down retirement pension amounts and increases to certain contribution rates and interest guarantees.

Year-on-year, the Singaporean index value increased from 67.0 in 2016 to 69.4 in 2017 primarily due to improvements in both the adequacy and sustainability sub-indexes. 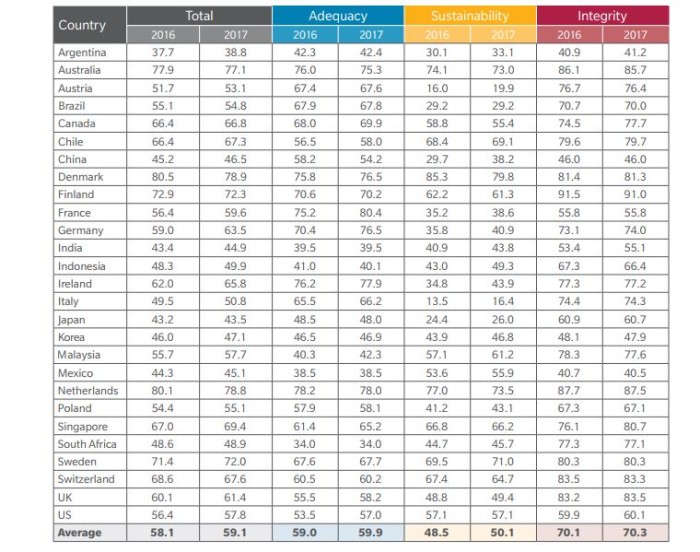 In maintaining the integrity and relevance of the index, two new questions have been included which has resulted in no country achieving the elusive ‘A’ grade. The first question addresses real economic growth in the sustainability sub-index, while the second question makes some allowance for voluntary pensions.

Naturally, the addition of a new question in the sustainability sub-index has resulted in the questions relating to assets and contribution levels having had their weightings reduced.

Countries that have seen a significant improvement in their index value are those which have had high real economic growth during the last three years and where this is projected to continue during the next three years – these include China, India, Indonesia, Ireland and Malaysia. 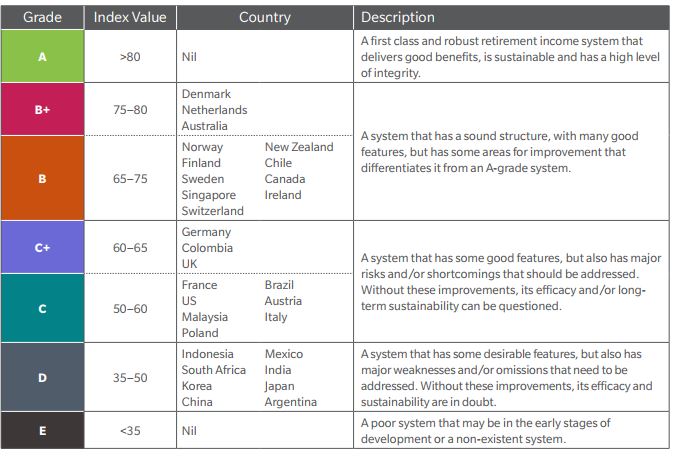 Conversely, countries with significant pension assets and high mandatory contributions but with lower real economic growth have seen a decline in their sustainability sub-index value. These include Canada, Denmark and the Netherlands.

The fake website is being shared along with a viral message claiming of an incentive for members who worked between 1990 and 2018...

Singapore’s best companies to work for in 2016

Minister for Manpower, Lim Swee Say, noted: "Being ‘manpower-lean’ doesn’t imply that companies can be 'manpower-mean'."..

The survey findings revealed that monetary remuneration is the main consideration for employees when it comes to switching jobs...

Just because the office is out of sight, it doesn’t mean it’s out of mind. How can bosses handle such constantly clocked- in staff..

Why your job is making you fat

HR leaders in Singapore weigh in on staying healthy and happy at work...