No major pay increments in the financial services sector

Executives and professionals in Singapore’s financial services sector who are expecting a dramatic increase in pay this year are going to be disappointed.

Mercer’s study on executive compensation in the financial services sector forecasts modest base pay increases in 2015, averaging between 2.3% to 3.2%. The hikes are expected to be led by emerging markets at 5% to 8%, followed by North America at 2% to 3%, and Europe in the range of 1.5% to 2%.

“We also expect companies in the region, especially the banks to tighten governance mechanisms around variable compensation, both short and long-term incentives.”

Overall, projections for base salary increases in the banking industry are generally lower than that of the insurance industry.

Incentive levels are also expected to hold steady, as 60% of companies forecast levels to be similar to 2014, while just one-fifth expect them to increase from last year.

In addition, most companies are not planning to change the design of their incentive plans. However, a quarter of banks are looking to increase the weight of non-financial metrics in their plans. 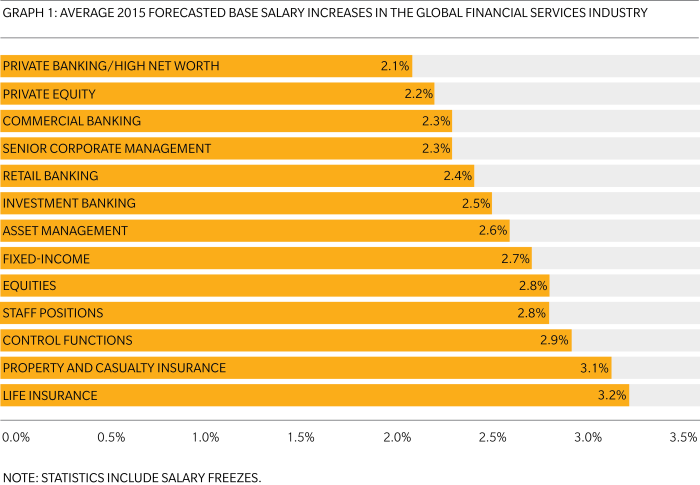 The industries with the happiest employees

Malaysians have a third of 2012 for rest days

What top candidates should know before an interview

The best candidate is an informed one, this is the type of research top candidates will have done before an interview...

20 weird things Singapore bosses have told staff to do

Would you deliver your boss's TV to his new home and set it up for him, or finish his children's homework? As it turns out, some l..