All employees at fashion retailer Jack Wills’ Hong Kong stores were asked to pack up their personal belongings on Monday (6 August 2019), and five Jack Wills stores in Hong Kong have not been in operation since then – according to local lifestyle news publication U Lifestyle. 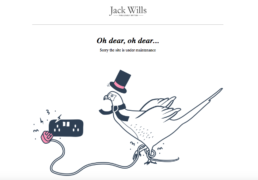 Jack Wills’ Hong Kong online website is also not running anymore. The future of stores in Singapore and the United States is not yet known.

On the day before, the United Kingdom’s largest sports-goods retailer Sports Direct, who recently took over the business of House of Fraser and Evans Cycles, announced to acquire the renowned preppy fashion brand for £12.75mn (HK$121.4mn).

The accounts filed with the Companies House UK have shown that Jack Wills was facing a pre-tax loss of £29.3mn and a deficit in earnings before interest, tax, depreciation and amortisation (EBITDA) of £7.5mn. Sales have also gone down 1.1%.

The Jack Wills business previously owned 1700 staff across the business, six franchised stores in Kuwait, Saudi Arabia, the UAE and the Channel Islands, and an e-commerce channel serving 130 countries.

Top 10 most challenging interview questions to ask a candidate

Civil servants in Singapore are no longer classified by education levels

This reflects efforts to change the impression that career progression of a civil servant is determined by paper qualifications. ..

Case study: How Cargill cut the time taken to fill a position by 4 days

See how the team at Cargill standardised a regionally-fragmented recruitment process - while saving both time and costs. ..

Staff who are used to a varied group outside of the office are better able to identify with a wider group in work, new study sugge..

Companies are also making it easier for employees to act as whistleblowers and raise concern or report malpractice...

The most expensive countries for health insurance for expats

Within this region, Hong Kong takes the top spot, with an average insurance cost of US $10,391, followed by China and Singapore...